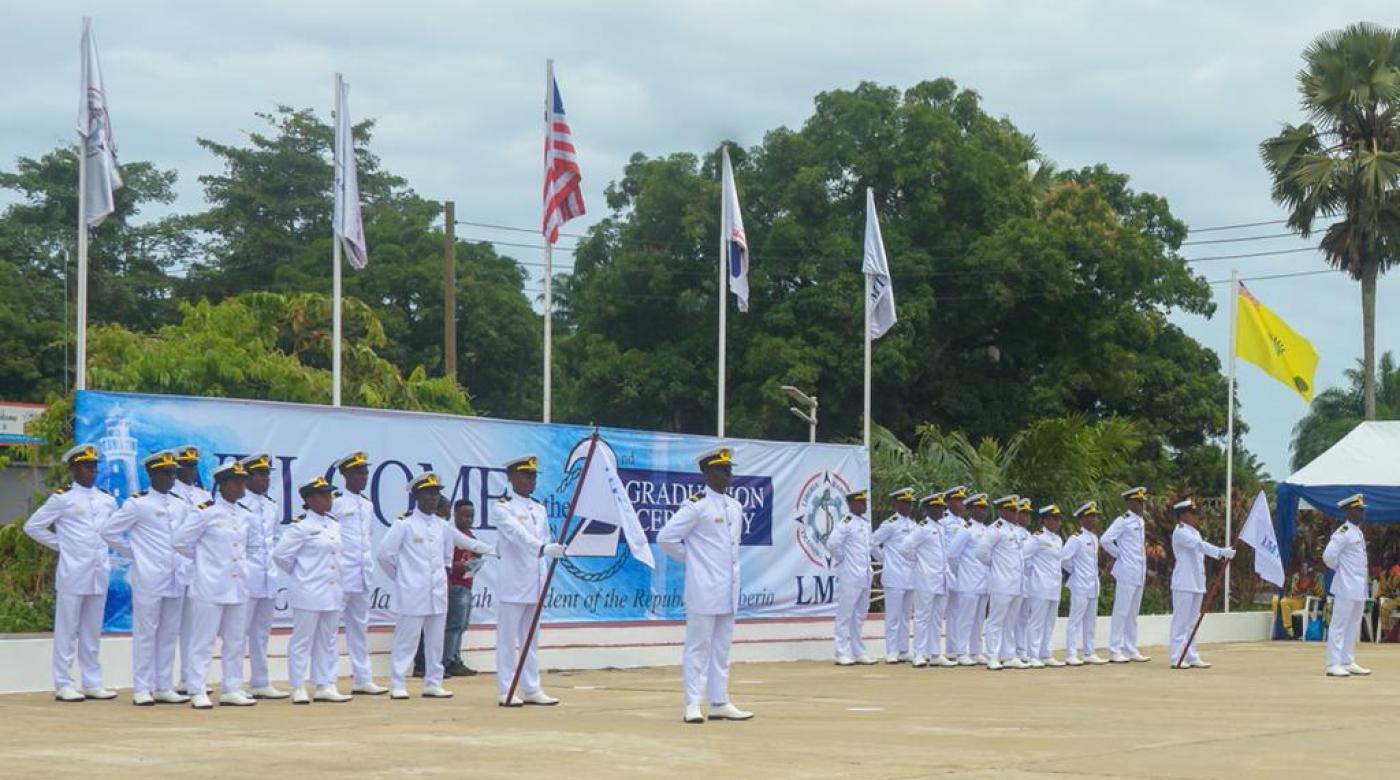 At the LMTI’s second graduation ceremony, the cadets marched proudly onto the court in their formation to the cadence of the Armed Forces Band.

Smartly dressed in their white suits, they were ready for the next level of achievement, and cheering them on were scores of family, friends and well-wishers, as well as their own instructors including President George Manneh Weah.

However, no sooner had the formalities begun, did the entire ceremony get disrupted by a gusty downpour of rain that left nearly everyone drenched at the outdoor event. The winds were too strong for the tents setup to provide shade from the blazing sun earlier that morning.

Although the President did not get to deliver his speech at the ceremony due to the downpour, a copy of the prepared text shared with the Daily Observer offered great words of encouragement to the cadets.

“The maritime world is yours to explore with diligence and commitment,” President Weah said. “Go out and do wonders in the maritime sector. You have set yourselves on a path of history by being the 2nd batch of graduates of this distinguished institution.”

He entreated the graduates in his speech to see themselves “as flag bearers” of Liberia while they render their expert services on the seas.

“You are a symbol of Liberia’s determination to rise and serve as a shining example for the rest of the world,” the Liberian leader said.

Weah noted that the graduation of the 24 cadets who enrolled at LMTI through thorough and vigorous vetting process is a testament to the immeasurable efforts they have put in to acquire meaningful skills.

Lenn Eugene Nagbe, Commissioner and chief executive officer (CEO) of Liberia Authority (LMA), was not in attendance but his deputy, Emmanuel Reeves, spoke on his behalf.

Nagbe’s speech, which was also not delivered by his proxy due to the heavy rainfall, was contained in a press statement issued by LMTI.

Zaidenberg added, “Today also demonstrates how public/private partnership can be used to directly impact the manpower development of the peoples in the surrounding of which it exists.”

Zaidenberg disclosed that there have been rave reviews of the performances of the first batch of cadets from the LMTI, emphasizing that they are doing really well.

“Six of the graduates who were sent to the Regional Maritime University (RMU) in Ghana have consistently maintained the Dean’s List and have received many certificates for their outstanding academic performances,” he explained.

The 24 cadets, comprising four females and 20 males, received an Associate of Science Degree in Marine Engineering. All of them are said to have secured positions either at the Regional Maritime University in Ghana (RMU), to continue their studies or onboard vessels or onshore jobs.

“We also continue to receive positive responses from those graduates who were sent onboard vessels and those who are assigned at port facilities. “Zaidenberg further revealed, concluding that “All these positive feedbacks are simply telling us to continue to do what we do and even do more.”

For his part, the General Manager of LMTI, Mr. Tal Hendler, praised the graduates for their resilience and challenged them to be ambassadors of the institution. “We are extremely happy to celebrate the graduation of our second batch of cadets after two long years of extensive training, in our state of the art Academy in Marshall. This class is exceptional because every one of you rose to the challenges of the unfortunate COVID- 19 pandemic.”

“Your resilience, courage and adaptability were seen during these difficult pandemic times. I believe that with these attributes, together with skills and values acquired during this training, many possibilities and happy moments await you in the years ahead,” Mr. Hendler recounted.

In extemporaneous remarks at a graduation reception, held in the LMTI cafeteria, where everyone immediately transitioned to for shelter from the torrential rain, President Weah noted that the rain came with some lessons to be learned.

First, he said, the rain “showed us that the cadets are ready, because we saw how they conducted themselves in water.” Another lesson, he said, underscored “the need for the LMTI to build a large enough hall” to host graduations and other such ceremonies to avoid future potential disruptions from the elements.