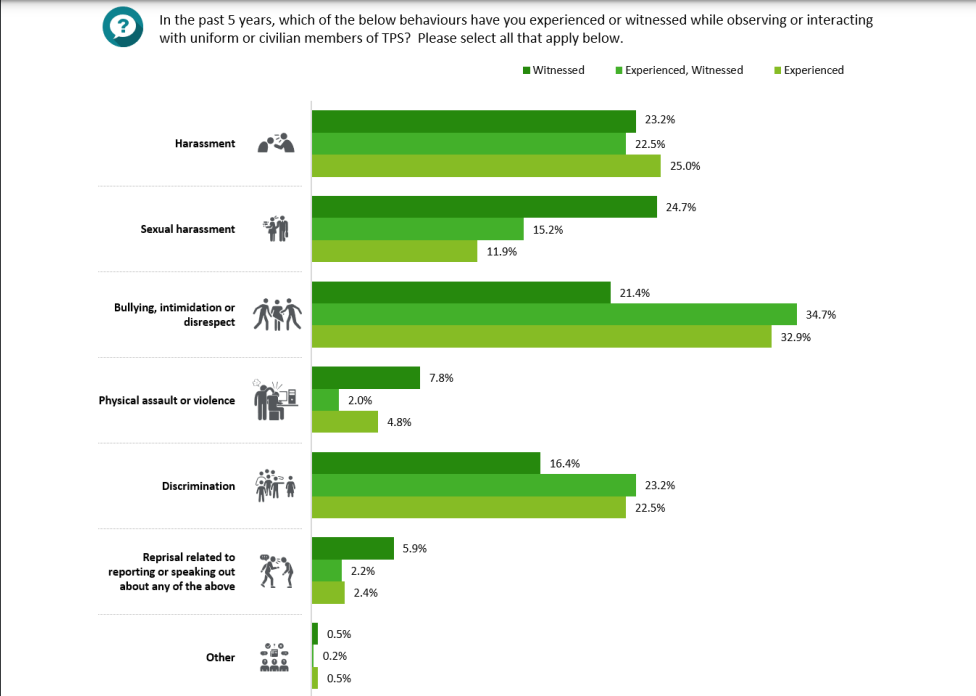 A review of workplace culture at the Toronto Police Service has found that 60 per cent of respondents had experienced, or witnessed harassment or discrimination in the last five years.

The report commissioned by TPS in 2019 and undertaken by Deloitte found that gender-based discrimination, the stigma around mental health and leadership conduct and diversity were some of the recurring themes among those who participated in the survey.

The experience of uniform versus civilian officers and a lack of trust in the complaints process was also key issues within the TPS workplace.

Of those who experienced or witness harassment and discrimination, less than half said they reported the incident. The majority of those who did report it said they disagreed their complaint was taken seriously or investigated.

Lack of accountability, fear of retaliation and a lack of confidentiality were some of the issues related to the complaint process.

Almost all of the members they spoke with said they perceived a history of gender-based discrimination within the Service.

“The severity of the issues described ranged from gender-based stereotypes and inappropriate jokes to sexual assault,” read the report.

“This was corroborated through a review of reports of investigation and cases heard by the HRTO, which highlighted instances of sexual harassment, and a general ‘toxic’ working environment for female Members.”

Twenty-eight per cent of female respondents to the survey said they experienced sexual harassment in the workplace, while just five per cent of males said the same thing.

Participants were also concerned that a culture of protection within senior leadership was exacerbated by a lack of diversity.

“Senior leadership was described as ‘white and male-dominated,’ with leaders promoting others who ‘look like them’, reinforcing these same issues.”

In 2018, only 16 per cent of senior officers were racial minorities and only 13 per cent were women. This report was also released the same day race-based data showed Black people are disproportionately subjected to the use of force compared to other communities in Toronto.

When it came to the stigma around mental health, respondents said despite the police service making strides in addressing mental health and providing services, 47 per cent disagreed or strongly disagreed on whether they would feel comfortable accessing well-being resources.

Another 44 per cent disagreed that there was no stigma attached to accessing well-being resources.

A number of civilian participants believed they are treated like “second-class citizens” compared to uniformed officers within TPS.

“Many civilian members described instances of being harassed, bullied, intimidated, and excluded from informal networks by Uniform Member colleagues. Both Civilian and Uniform participants also acknowledged a general perception that Uniform Members ‘outrank’ Civilian Members, even those Civilian Members that hold management-level positions,” the report stated.

TPS also released an equity and inclusion survey Wednesday taken in 2021 which showed the majority of respondents believe the service was making strides in offering an inclusive environment for employees.

Almost half, 47 per cent, said things have gotten better over the past 5 years in terms of discriminatory behaviour at the TPS, but those who are white, men and who had been working at TPS for more than 11 years were more likely to say things had improved.

As a result of the survey, a number of recommendations have been made for how the police service can move forward and try an eliminate harassment and discrimination.

On top of enhancement of training materials and methods and refining existing HR programs, the following recommendations were also given:

In a release, TPS said they along with the board have accepted the findings and will consider all the recommendations given in the report.

“The recommendations speak to the need to foster a culture that is based on equity, diversity and respect – a goal we have been working diligently towards, and which is a work in progress,” said Chief Ramer.

“That work includes understanding and reforming our own workplace and being frank about the challenges some of our members have experienced at work.”

Ramer said they have also established a working group comprised of 16 police services across the province on Respectful Workplaces in Policing.

“The issues of workplace harassment and discrimination around the culture of policing are sector-wide and require sector-based solutions,” said Ramer in a release.