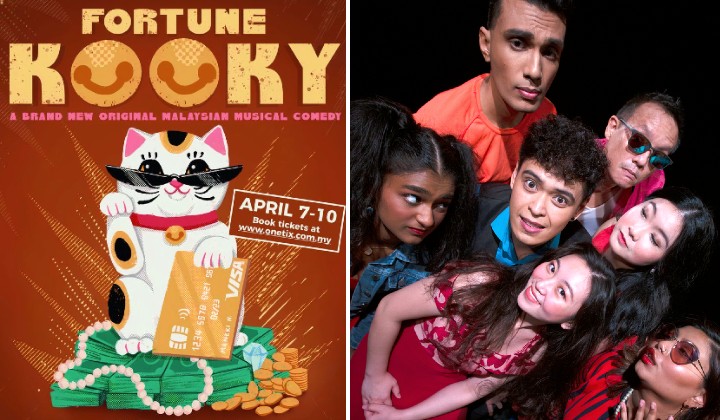 For those who have been waiting for the art scene to make a comeback, get ready for the all-Malaysian musical comedy Fortune Kooky which will only be showing for a limited time this April.

Fortune Kooky tells one of our favourite stories: an ordinary Malaysian hitting the jackpot and earning a fortune.

Jared, played by Ronnie, is the son of a hawker who aspires to become rich by developing a new fitness app. He received a blessing from the God of Wealth played by Alvin Looi, and it seems that all his dreams are coming true.

Yet the sudden influx of fortune has untold consequences. While he wanted a better life for his mother Anne, played by Rachel Liu; girlfriend Rachel played by Angie Cheah; and best friend-slash-business partner Arvind played by Nikkhil, things take an unexpected turn.

In the pursuit of money, will he end up losing what really matters in life?

The writers of Fortune Kooky were inspired by personal experiences with money, especially by how easy it is to get into serious trouble after making major financial mistakes.

In fact, wasted money on frivolous, useless things is pretty much a universally shared experience.

Whether we like it or not, money plays a major role in anyone’s life. I don’t think there’s anyone on earth, no matter how rich or poor, who isn’t concerned about their finances to some degree.

Expect A Night Rich With Entertainment

The team behind Fortune Kooky, KuLT Productions, are the same people from 2019’s breakout musical comedy The Working Dead, which was nominated for 13 awards at the 2019 Boh Cameronian Arts Awards and won 3.

If history is any indication, then you wouldn’t want to miss a fantastically entertaining show with energetic performances, a thrilling story, and unforgettable songs.

The 2-hour musical will feature 12 original songs written by Terence Toh and Lydia Tong, with music by Tong and Kelvin Loh.

However, this time, their musical will only run on one weekend, from April 7-10, at Nero Event Space, Petaling Jaya Performing Arts Centre in 1 Utama Shopping Centre.

There’s no better time to support the return of Malaysian’s art scene and promise yourself a kooky good time! Get tickets here or check out the event page for further details here.