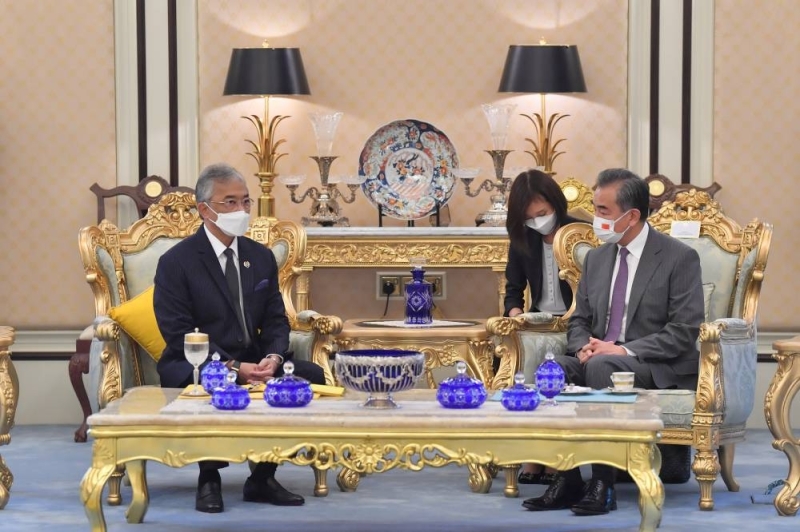 Comptroller of the Royal Household of Istana Negara Datuk Ahmad Fadil Shamsuddin said the audience was the first for Wang Yi, who is on a two-day official visit to Malaysia.

Ahmad Fadil said during their meeting, which lasted 45 minutes, His Majesty and the minister discussed various matters relating to bilateral relations between Malaysia and China which had existed since 1974.

“The discussion of the two leaders also touched on efforts to bring trade and economic cooperation between the two countries to greater heights following the elevation of Malaysia-China relations to Comprehensive Strategic Partnership in 2013.

“Both countries will celebrate the 10th anniversary of the partnership next year,”  he said in a statement.

Ahmad Fadil said Al-Sultan Abdullah expressed his appreciation and happiness for the close and special relationship between Malaysia and China in various aspects, including the assistance extended by the Chinese government and cooperation between the two countries in combating the spread of Covid-19 and in the post-pandemic recovery.

“His Majesty expresses his appreciation to His Excellency Wang Yi for the invitation to make an official visit to China.

During the meeting, Al-Sultan Abdullah and Wang also discussed on the investment projects of Chinese companies in Pahang, especially in the Malaysia-China Kuantan Industrial Park in Gebeng.

According to Ahmad Fadil, His Majesty expressed appreciation to the Chinese government because the projects were a catalyst for economic growth, especially in Pahang and Malaysia’s East Coast Economic Region.

Since 2009, China has been Malaysia’s largest trading partner and accounted for 18.9 per cent of the country’s total trade in 2021.