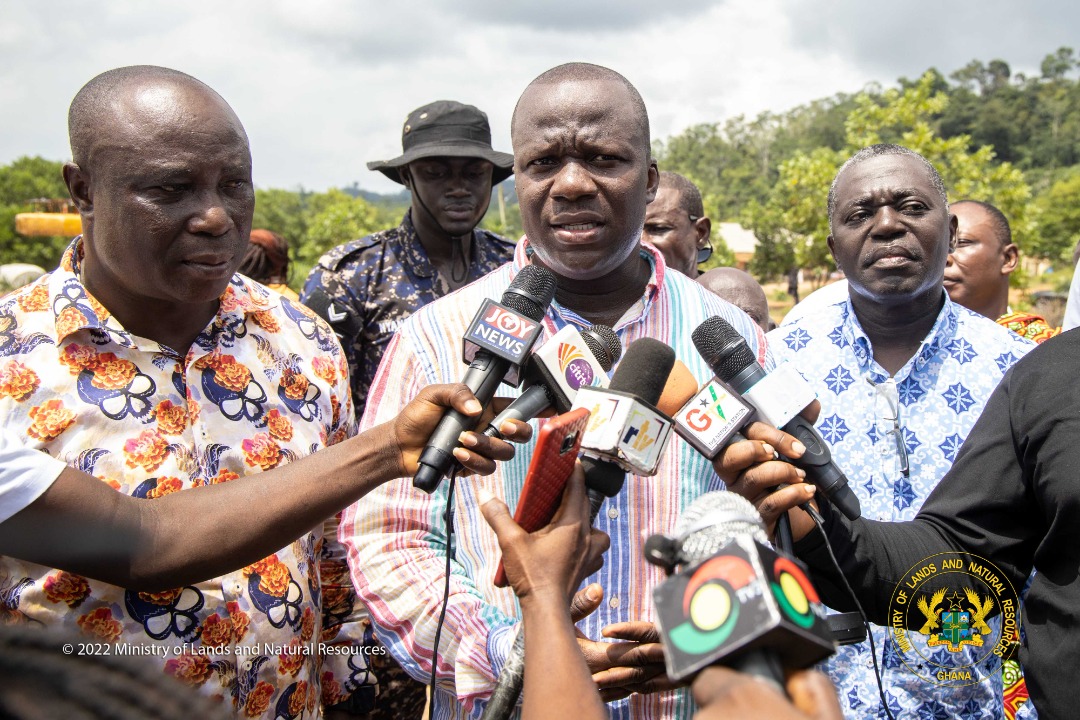 The Minister for Lands and Natural Resources Samuel A. Jinapor has reaffirmed the commitment of government to reconstruct the model Appiatse Commmunity within one year as promised.

He said, the Masterplan for the reconstruction of the Appiatse rural model community is ready and in a matter of weeks, the Vice President, H.E Dr. Mahamudu Bawumia on behalf of the President of the Republic will cut sod to commence construction of the core community which will consists of 124 housing units.

He said “by the Grace of God within one year we will deliver these houses” while indicating that all components of the model Appiatse housing units comprising of 1-7 bedrooms are fit for purpose.

The visit by the Hon. Minister was to among others access the conditions and well-being of the residents after their relocation from the tents into the temporary structures in May.

He also used the occasion to debunked some assertion from the public that Funds meant for the rebuilding of the community is being used for the construction of the National cathedral.

He maintained that “The Appiatse project is non- Partisan, without colourazation and called on the inhabitants in Appiatse and environs to dismiss such propaganda and untrue statements.

He also employed the opportunity to call on Ghanaians to support the Appiatse Reconstruction project by donating to the support fund, stressing that the funds will be disbursed transparently and usefully.

The Hon. Minister as part of his visit also symbolically decommissioned the tents which previously housed the residents to end the era of living in tents.

“I am very impressed with the work of the ARIT team headed by my Deputy Minister in change of Lands and Forestry. They have done very well and have shown that they are a true example of the Ghanaian tradition of public service”

Addressing the residents Hon. Jinapor called on them to come together and support the government to deliver the houses, adding that their collective effort is needed during this critical time for the houses to be delivered to them.

The Lands Minister also donated assorted food items including bags of rice, sugar and gallons of oil to the residents estimated at GHC 10,000.

Hon. Benito Owusu-Bio, Deputy Minister for Lands and Natural Resources and Chairman of the Reconstruction Implementation Team said plans are far advance to ensure that electricity, water and other basic amenities are made available to the community.

He added that designs, survey works, and plotting of the sites are all being completed to enable the actual reconstruction works to begin next month.

On behalf of the Nana Kojo Bremibi Chief of Appiatse, Kyiame Kwame Ofori expressed gratitude to the Hon. Minister and the reconstruction team, saying that the efforts of the Hon. Minister demonstrates true leadership and wished him and his team well as they embark on the rebuilding journey.