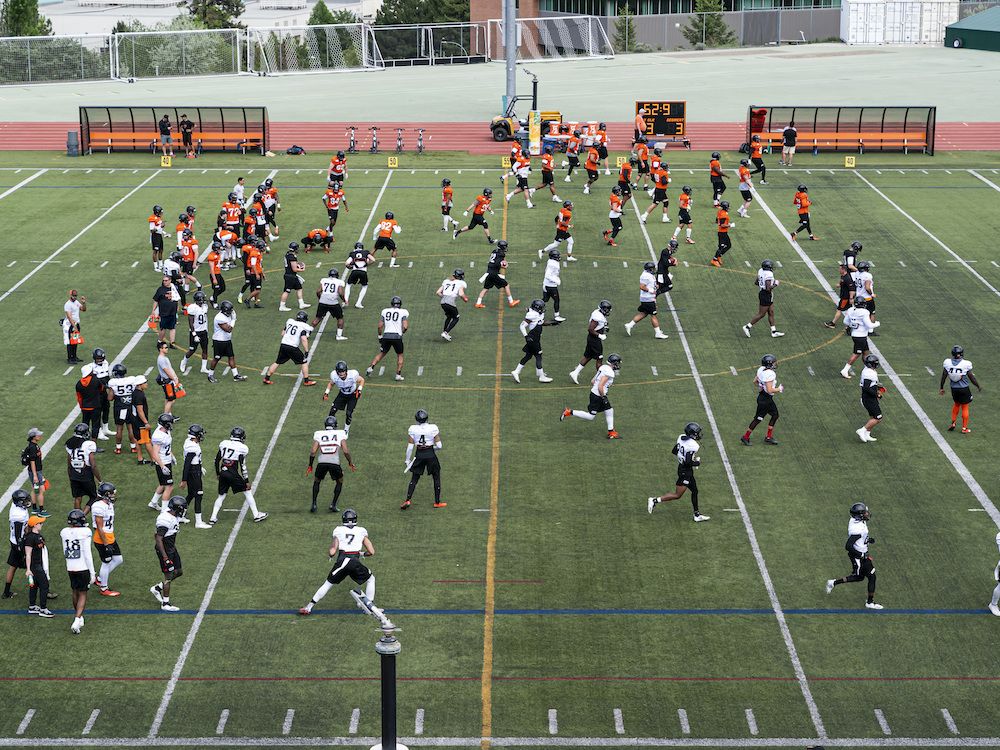 It was hurry-up-and-wait. It was hitting the refresh button time and time again on your email inbox. It was scouring Twitter for news — any news — about the current status of the collective bargaining agreement talks between the CFL and its players’ union.

And now? Now it’s ‘Go Time.’ As B.C. Lions linebacker Jordan Williams told his cadre at training camp in Kamloops on Thursday: “Vacation time is over.”

After days of intensive, oft-acrimonious, contentious and stressful negotiations, the league and the CFL Players Association agreed on the framework of a new CBA on Wednesday night, ending the first CFL players’ strike in 48 years.

The deal still needs to be ratified by the players, but with the concessions they won through their deadeye tactics, it seems almost a formality.

“We didn’t know how long (the strike) would be and we just needed to be patient,” Lions coach Rick Campbell said Thursday.

“And so we’ve flipped the switch … We gotta get out there and get going. We’ve adapted our schedule and we’re going to try to squeeze some more practices in here or there as we try to make up what we can, but there’s no question that all the teams that missed these days, there’s definitely a disadvantage.”

The league’s two teams in Alberta — which includes the Lions’ season-opening opponents, the Edmonton Elks — kept practising during the work stoppage due to the labour laws in the province requiring a 72-hour strike notice. The Lions players ran practice sessions with both the offensive and defensive units, but without the safety net of insurance coverage, kept it to light drills that wouldn’t put their health at risk. They also had access to the weight room at the local recreation centre.

Cuteness alert 🚨 B.C. Lions QB Nathan Rourke playing with kids from a nearby daycare after an informal practice this morning at Hillside Stadium. Players took time to meet the kids in #Kamloops #CFL pic.twitter.com/EW8uUPgWqL

“The biggest thing is that we were able to get some work done,” said quarterback Nathan Rourke. “Given the circumstances, we were very lucky. We had access to the weight room … we were able to have time on the field. We know that that wasn’t always the case around some of the teams around the league.

“On a day-to-day basis it was a lot of refreshing emails, refreshing Twitter … annoying (player representative) David Mackie as much as possible to try to get information.

“There was a lot of uncertainty but I was proud of the way that the guys spent it, because we spent it together for the most part. We all knew that we had a lot of time together, and we didn’t want to waste it doing nothing.”

TSN’s Farhan Lalji said the proposed seven-year CBA represented a major win for the players, as they won increases to the salary cap, access to multiple revenue streams they previously hadn’t had, better health-care coverage for current and former players, and an “opt out” clause that can be triggered after TSN’s TV deal expires in five years.

Mackie, a self-described “messenger pigeon” between his teammates and their union, had a bad taste left in his mouth by the tactics of the league’s bargaining committee, which was led by Hamilton Tiger-Cats CEO/minority owner Scott Mitchell and Winnipeg Blue Bombers president Wade Miller. Their initial offer gutted the Canadian player ratio and offered a pittance of revenue sharing, and they walked away when the players rejected it.

And while past CBA talks have always resulted in a deal before the season, with the players usually on the side giving up more, this time the CFLPA was unflinching and the players went on strike for the first time since 1974.

“The willingness in the past was never the issue. I think the issue was preparedness. And I believe we have the right guys in place and the players’ association now that made sure we were prepared to go about whatever it was that we needed to do,” said Mackie. “I feel like there’s always room for growth, but compared to where we’ve been in the past … it definitely seems like we’re moving in the right direction. I think we’re fortunate to bargain hard and this strike paid off.

“I don’t think our executive will bring it to us if they weren’t satisfied. They wouldn’t bring that to the table for us to agree upon.

“We have been searching for a relationship and a partnership with the league, I believe, for a long time. Because ultimately, if the league succeeds, then we succeed and we get paid more, and we (all) look better in the media and it’s good for everyone.”

The hottest of the molten-lava-heated hot button issues was the Canadian ratio, which the league wanted to basically eliminate. The new CBA ensures that teams start at least eight Canadians, one of which can be a nationalized Canadian — a veteran player who’s been with the same team for three years or in the league for five. A further three nationalized players can play up to 49 per cent of the snaps on offence or defence.

“There’s always going to be a concern when the ratio gets attacked. Considering the first proposal on the table was that Canadians are basically eradicated from the starting lineup, that didn’t settle well for a lot of us, and we’ve been fighting tooth and nail to protect the Canadian number,” said Mackie. “Are we going to be unhappy regardless what changes transpire? Yeah, of course, right? Unless that number goes up, I don’t think a single Canadian in the league will be happy.

“It’s just super-unfortunate that every year we have to preach to make sure that the number stays the same … If we’re going to ratify the seven-year deal, why don’t (league negotiators) just stand up and tell the players why they’re trying to get rid of Canadians?”