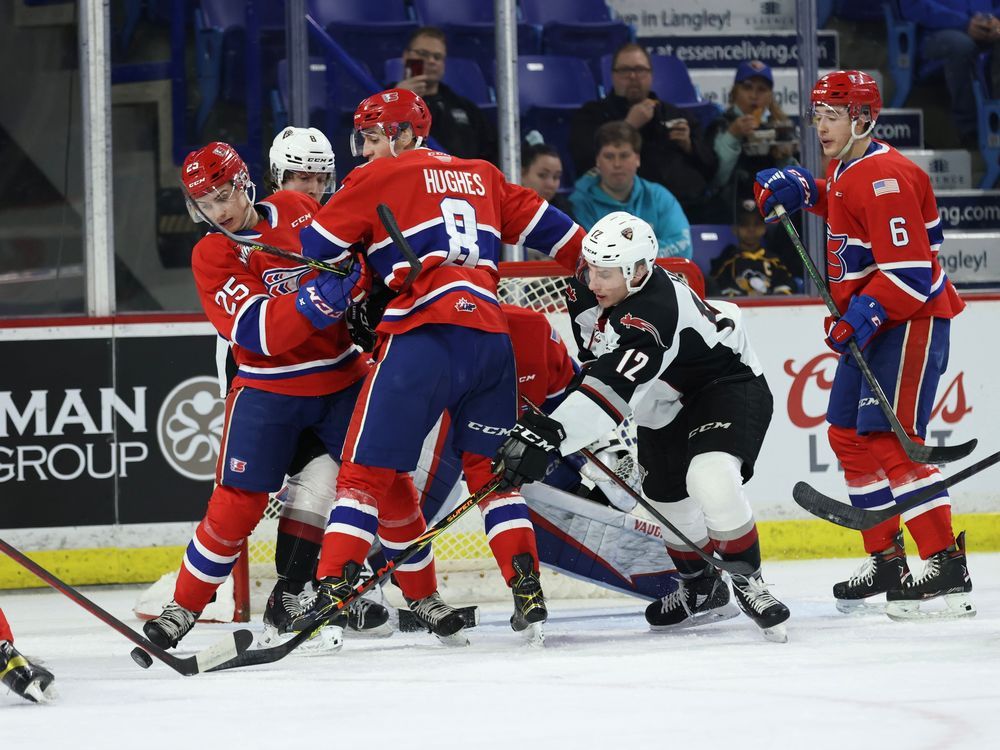 The Vancouver Giants went into this past weekend on the verge of clinching a playoff spot in the WHL’s Western Conference, they’ll head into next weekend’s action in the exact same spot.

The Giants, who could have assured themselves a post-season berth if they had taken both ends of a doubleheader from the visiting Spokane Chiefs, lost 5-2 on Saturday and 4-1 on Sunday.

The weekend losses leaves the Giants in sixth place with a 23-35-4-0 record, tied with Victoria Royals (22-36-5-1). The Giants, who have two games in hand on Victoria, have the tiebreaker with more wins.

With their weekend wins, Spokane (22-37-5-1) is one point back of Vancouver and Victoria, but one point up on the Prince George Cougars (22-37-3-1) for the eighth and final playoff spot in the West.

According to the WHL office, the Giants’ magic number to clinch a playoff spot Monday remains at eight points, meaning that any points accumulated by Vancouver and lost by Spokane totalling eight would advance Vancouver to the post-season.

The magic number could be as low five by the time Vancouver’s hits the ice again to play the third-place Portland Winterhawks (43-16-3-2) on Friday at the Langley Events Centre, depending on how Spokane and Prince George fare in midweek games.

The Giants have six games remaining. They could lose all of them and still make the playoffs if the Cougars also drop their last five. They could place anywhere between sixth and eighth. They could also miss out on the playoffs altogether.

The Giants power play, in particular, has struggled. They haven’t scored a goal on it in the past four games. They’re 3-of-27 (11 per cent) during this six-game skid.

“We have to play faster,” Dyck said. “When we play fast and get the puck on net and have bodies at the net, we create momentum. That’s what we want do. We don’t have to look for the perfect play. We need to get more pucks on net.

“We have power play guys. It’s a matter of those guys working together.”

In this current six-game stretch, the penalty kill has given up eight goals on 25 chances (68 per cent).

Vancouver has a difficult schedule remaining. After Portland, they have three games with the fifth-place Kelowna Rockets (38-19-1-5) and single games with the second-place Kamloops Blazers (46-16-2-0) and fourth-place Seattle Thunderbirds (40-18-4-2). Their last league game is April 16.

Lysell, the 19-year-old Swedish winger who was the No. 21 overall choice by the Bruins last summer, had a short-handed goal on Sunday and leads Vancouver with 54 points, including 21 goals, in 47 games.

Lysell was one of two Swedes to join the Giants this season. The other was goalie Jesper Vikman, who was a fifth-round pick of the Vegas Golden Knights in 2020. Vikman, who turned 20 last month, has been sidelined since a March 4 game with what looked like a groin or a hamstring injury. Vancouver has gone 3-9-2-0 without his services.

The Giants remain hopeful that he’ll return to action this season.