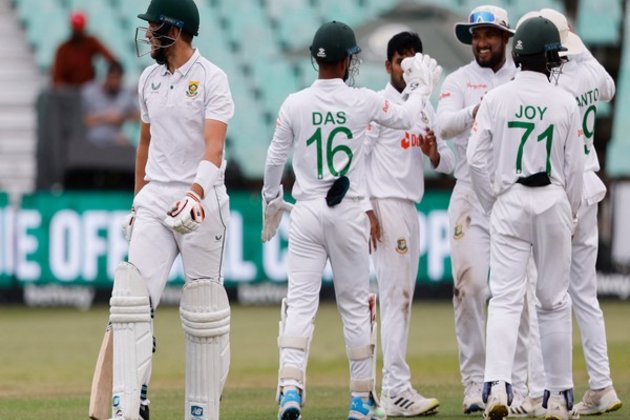 Port Elizabeth [South Africa], April 11 (ANI): After facing a Test series defeat against South Africa by 2-0, Bangladesh captain Mominul Haque expressed ‘disappointment’ and said that they did not play well as a team in the series.

South Africa defeated Bangladesh by 332-run in the final Test. On the fourth day of the second test, Bangladesh’s resistance lasted just around an hour on day four as Maharaj spun a web around the batters. The visitors were bowled out for 80 in their second innings as South Africa swept the series 2-0.

“We didn’t play well as a team in this series. South Africa played really well and congratulations to them. We are disappointed but have to move forward. We play well when everyone contributes and that’s why, first innings in Durban was good. We didn’t have any partnership with bat or ball, even with the ball we kept leaking from one end,” said Mominul Haque in a post-match presentation.

“Opposition don’t make conditions as you want and as international cricketers, we have to adapt. We can’t give excuses for that. We have to play according to our process, we lost our process in this Test match. At least we managed to win the ODI series but we wanted to end the Test series on a high as well,” he added.

Starting the day at 27/3, Bangladesh lost their veteran batters, Mushfiqur Rahim and Mominul Haque, in consecutive Maharaj overs. Yasir Ali didn’t look to hang around and went for a big shot but was holed out in the deep for a duck.

The 25-run stand between Liton Das and Mehidy Hasan Miraz was Bangladesh’s highest of the innings. But as Das looked to find the fence, he strayed out of the crease to Maharaj and was stumped – it was Maharaj’s second five-for of the series. The left-arm spinner picked two more wickets in his next over to complete his second seven-wicket haul in as many games.