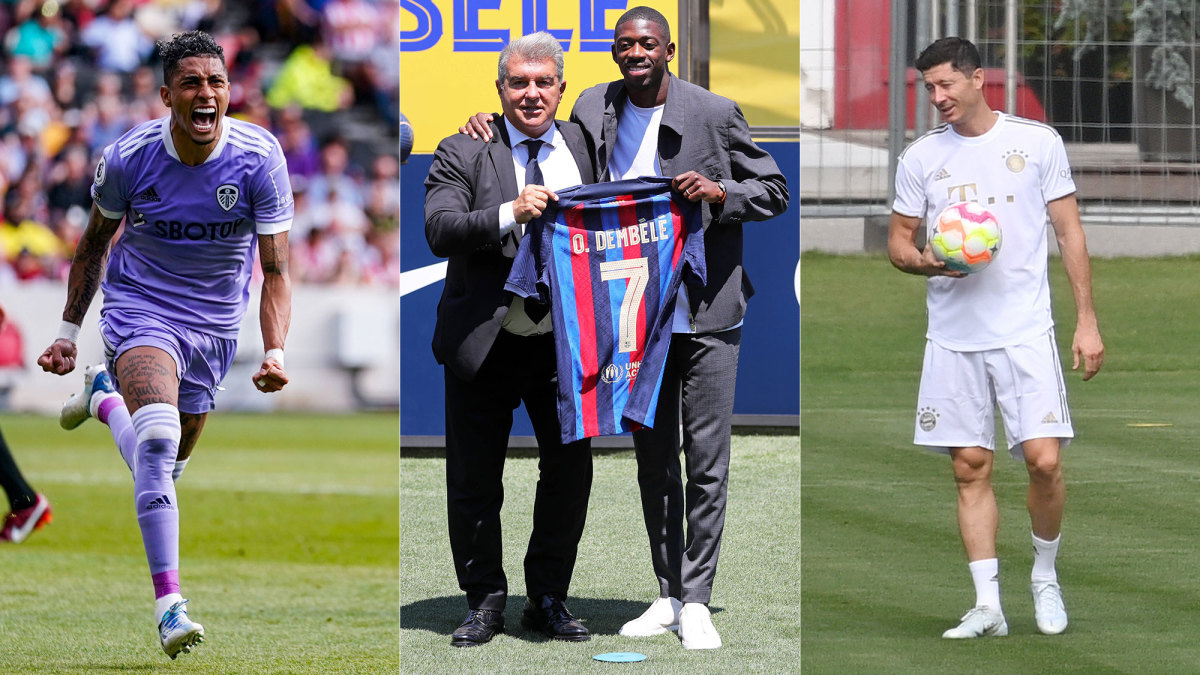 Despite all of the big buys and decisions over the last month, it’s largely been a summer so far of transfers that haven’t quite happened yet, of players being strongly linked with clubs, of terms being agreed on and then … a delay. There’s always some of that, of course, but this summer the major problem is Barcelona and the incredibly complicated state of the club’s finances.

Club president Joan Laporta, elected last year, has insisted Barcelona is back after the humiliation of losing Lionel Messi on a free transfer to Paris Saint-Germain, having allowed his contract to run down and then being unable to re-register him because of the club’s financial strife. And this summer Barcelona seems to have been in for just about every high-profile player available.

Andreas Christensen and Franck Kessié, signed on free transfers from Chelsea and AC Milan, respectively, and were both announced last week. Talks go on about the free transfer of César Azpilicueta from Chelsea, and Barcelona remains the preferred destination of Robert Lewandowski following the breakdown of his relationship with Bayern Munich. Marcos Alonso seems stuck in limbo somewhere between Chelsea and Barcelona. Then came the news on Wednesday that an agreement had been reached with Leeds United on a $58 million deal for Raphinha, apparently scuppering Chelsea’s hopes of signing the Brazilian.

But behind every deal lurks a simple question: How? How can Barcelona, still $1.3 billion in debt and hampered by La Liga’s stringent financial fair play regulations, be able to afford this? To which the answer is that it can’t, not yet. Tellingly, neither Christensen nor Kessié have been registered, because Barcelona needs to raise funds before it can even begin to comply with the economic limitations.

All of which brings further confusion. Given the need to clear the wage bill, why is Barcelona extending the contract of Ousmane Dembélé, who joined the club for an inflated fee when it had the Neymar money burning a hole in its pocket? He signed a new deal Thursday on a reduced salary that will last until 2024. Offloading a player who has started only 69 league games in the four and a half seasons since his arrival from Borussia Dortmund would appear like a relatively straightforward way to trim the budget.

Frenkie de Jong, meanwhile, is a player Barcelona seems willing to sacrifice, despite owing him a reported $20 million in back wages from the deferral he took during the pandemic. He has been warned that the club cannot pay that back in the near future and is believed to have been asked to accept a further pay cut. A deal worth $65 million, potentially rising to $85 million, has reportedly been agreed upon with Manchester United, but de Jong is evidently reluctant to leave Barcelona, even to reunite with his former Ajax manager Erik ten Hag.

Discerning any kind of plan is extremely difficult. Given Barcelona already has Dembélé, Pierre-Emerick Aubameyang, Ferran Torres, Memphis Depay and Ansu Fati, it’s not entirely clear why it needs either Raphinha or Lewandowski, especially if it has a need to operate a bit more frugally. Kessié is hardly a like-for-like replacement but at least he plays in roughly the same position as de Jong. Clément Lenglet has been loaned to Tottenham, which eases a little pressure but also leaves Barcelona short at center back, while Philippe Coutinho’s wages are finally off the books after a full, discounted transfer to Aston Villa.

In the short term, Barcelona hopes to manage its financial position by selling a 49.9% stake in the company it set up to market itself and a 25% share of television revenues over the next 25 years. Both, clearly, are extremely risky moves, sacrificing future profits for a transfer splurge now. When Torres was signed last season, he could at least, at 22, be presented as an investment for the future, a player whose value would increase. Raphinha and Kessié, at 25, perhaps just about fall into that category, but Lewandowski, at 33, manifestly does not. The gamble appears to be that buying now will get Barcelona out of its slump and the success it generates will raise revenues sufficiently for the club to reach a level of sustainability. Perhaps it can, after all, Barcelona was until recently habitually one of the richest two or three clubs in the world by revenue. But it seems like an astonishing risk, particularly when there was an obvious opportunity for gradual consolidation based around the current fleet of exceptional young players, using Xavi to return the club to its philosophical roots.

But more significant, perhaps, is the moral issue and the way de Jong has been treated. Presumably some repayment scheme will eventually be agreed upon, but it’s very hard to understand why he should suffer just because Barcelona wants to start signing big players again. And while the club works through its financial issues it feels that for many the market is jammed.