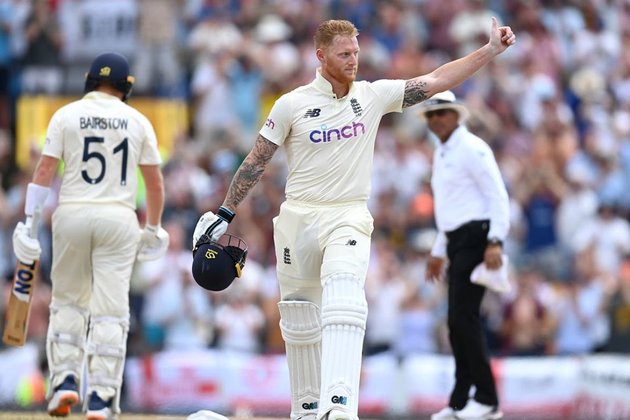 Ben Stokes brought up his century to forge England to a commanding 482 for 6 at tea on the second day of the second Test against West Indies in Barbados.

After Stokes’ morning rampage, in which he smashed 89 off just 92 balls, Kemar Roach and Jason Holder put the lid on England at the start of the second session, with Roach also claiming the important wicket of Joe Root with just two runs added to his lunch-time score.

And after Stokes had crept towards his 11th Test century after the break, he reverted to his earlier belligerence a short time later and fell in the process for 120, attempting a third consecutive six off Kraigg Brathwaite. Chris Woakes and Ben Foakes shared an unbroken stand worth 58 for the seventh wicket as England looked to consolidate an excellent innings so far.

Roach, with his first ball back into the attack and the seventh after lunch, ended Root’s innings on 153 with one that nipped back from outside off and rapped the front pad. Initially adjudged not out by umpire Nigel Duguid, the hosts reviewed and Hawk-Eye showed the ball crashing into the top of leg stump to move Roach past Sir Garry Sobers and clear into seventh on West Indies’ list of all-time wicket-takers.

Five overs had passed since the break without England finding the boundary until back-to-back fours from Jonny Bairstow, who crashed Jayden Seales down the ground and through the covers.

Stokes then brought up his ton with a scampered single after he pushed Seales to the off side. It had been well over a year-and-a-half since his previous Test century, his four-and-a-half-month absence while managing a finger injury and his mental health notwithstanding.

Bairstow holed out to Nkrumah Bonner at deep midwicket off Alzarri Joseph and with that Stokes started swinging again. He heaved Brathwaite over the fence at deep midwicket for his first boundary since lunch, some 13.2 overs after the resumption, and was very nearly out on the next ball, lofting Brathwaite to long-on, where John Campbell spilled a tough chance while stepping on the rope. Stokes came undone going big again one ball later, this time skying Brathwaite to Shamarh Brooks at long-off.

Earlier, Stokes and Root had England innings looking like London buses as they carried their side past 300. That mark had evaded them for 12 innings and more than six months, until the first Test in Antigua, when they racked up 311 and 349 for 6 declared.

Stokes twice advanced on left-arm spinner Veerasammy Permaul to launch him down the ground for six in consecutive overs, bringing up his fifty in the second instance. He later muscled Permaul over the fence at midwicket before clubbing the very next ball over cover for four.

Stokes took to Joseph in the following over with three consecutive fours, bringing up the 100-partnership with Root via a powerful drive through cover before launching him over long-off and through midwicket. But Stokes wasn’t done, passing 5000 Test runs with a mow down the ground to clear the fence by some distance.

Root passed 150 for the 12th time in his career, the most by any England batter, and shared a 129-run stand with Stokes, having put on 164 the previous day with Dan Lawrence, who contributed 91.

Valkerie Baynes is a general editor at ESPNcricinfo