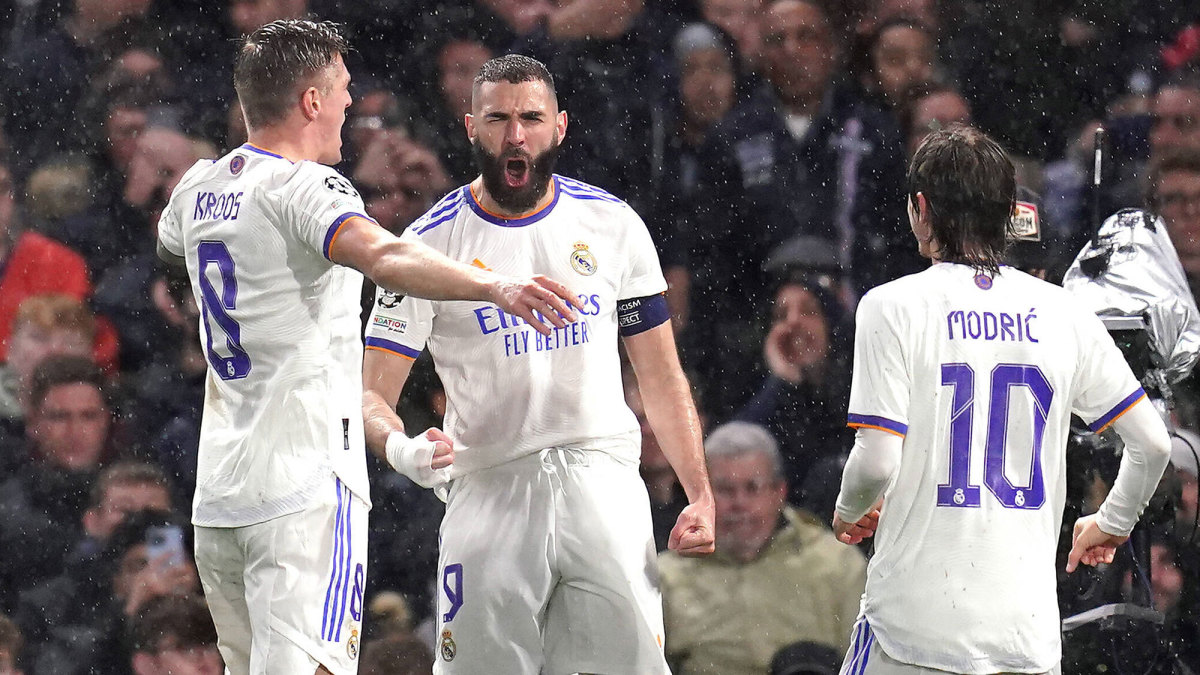 With no Cristiano Ronaldo or Lionel Messi to take the Champions League quarterfinal spotlight, Karim Benzema is basking in the glory with back-to-back hat tricks.

The Real Madrid star already stole the show in the Champions League round of 16 with his 17-minute hat trick against powerhouse PSG. In the final half hour of the second leg, Benzema singlehandedly erased a 2–0 aggregate deficit to send Messi & Co. crashing out of the Champions League.

On Wednesday against Chelsea in the Champions League quarterfinal first leg, Benzema picked up where he left off with three goals for Real over the course of 25 minutes.

The French international opened the scoring at Stamford Bridge in the 21st minute with his laser header off of Vinicius Junior’s cross—a goal that was remarkable for the fact that Benzema headed the ball from distance, just inside the line designating the penalty area.

Just three minutes later, Benzema doubled Real’s lead over the defending European champion with another header. Luka Modrić picked Benzema’s run out with a perfectly lofted ball and the forward made no mistake to adjust his balance and direct the ball back across goal.

However, Chelsea was able to pull a goal back thanks to Kai Havertz’s 40th-minute header to cut Real’s lead in half heading into the break, and Benzema missed what would have been his third goal of the half, pushing his close-range chance wide of the mark.

But Benzema wouldn’t have to wait long to secure his hat trick. In the 46th minute, Chelsea keeper Édouard Mendy misplayed a seemingly easy ball as he tried to find Antonio Rüdiger. Benzema pounced on the mistake and was as clinical as ever, coolly finishing past a sliding Mendy to extend the lead to 3–1.

The three goals give Benzema 11 in this season’s Champions League—trailing only Bayern Munich’s Robert Lewandowski (12)—and 82 for his career, which is fourth most all-time (Ronaldo, Messi, Lewandowski). It also marked the first hat trick scored against Chelsea in European competition.

Real would go on to win comfortably and will take a 3–1 lead to the Santiago Bernabéu for the second leg.