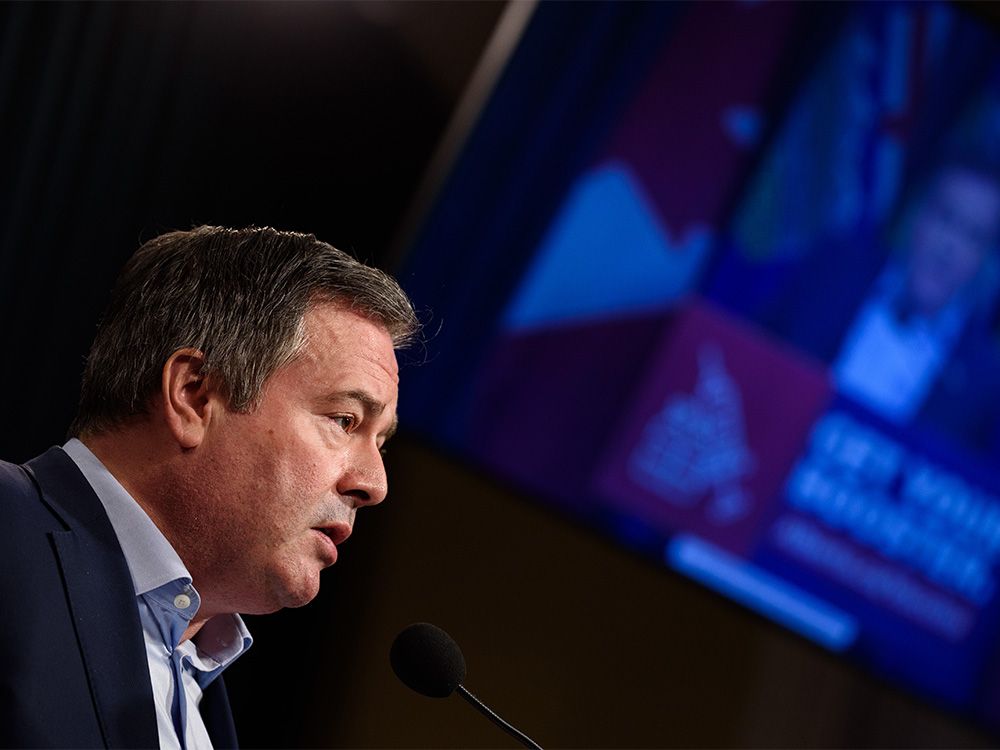 Premier Jason Kenney’s UCP opponents have been trying to force a vote on his leadership for months. In Ottawa, the federal Conservatives have worked up a ballot in what seems like minutes.

On Wednesday, federal MPs are to vote in secret. And Conservative Leader Erin O’Toole’s job really does depend on winning, because the process is federal law.

If 20 per cent of the MPs in a party caucus want a vote on the leader, it’s held. If 50 per vote against, out the leader goes.

There is no such formal process in Alberta. Kenney has faced months of opposition from his own people, often publicly, along with the most Byzantine backroom plotting in the history of modern Alberta politics.

The party still agonizes every day over rules for a leadership vote by members on April 9. Because of the sloppy, ill-defined process, discontent and mistrust boil in the party.

On Tuesday, Kenney was asked if he thinks O’Toole should be allowed to stay. As he answered he sometimes looked like he’d laugh out loud, because the parallels between him and O’Toole were so obvious.

“I’m pretty focused on a number of very difficult issues here right now. I’m not getting caught up in federal politics,” he began.

“I would just say this to my friends in the federal Conservative party — I don’t think in the long run it makes sense to change leaders after every election. I think stability and continuity are important conservative principles.

“I would also just encourage my friends in the federal Conservative party not to say or do things right in the heat of the moment that they might end up regretting, on either side of this debate. What the public expects is for the opposition to hold the government to account.

“That would be my encouragement, just to be patient with one another and seek through this difficult time to be respectful and patient with each other and not to say things they might end up regretting six months or a year down the road.”

It’s exactly the argument Kenney makes with his own MLAs, and maybe to his mirror.

But some of those MLAs slag him out loud, publish letters demanding his resignation and resist core government policies in public after they lose in private.

They’ve come to believe he never listens to them, while wielding ultimate authority over their workplace and chances for advancement.

The conflicts have shattered public faith in Kenney’s government and destroyed any hope of caucus solidarity behind his moderate policy on COVID-19.

That federal vote on O’Toole is only happening because a Conservative MP from southern Ontario, Michael Chong, pushed for years to give regular caucus members more influence over their leadership.

Perhaps motivated by his experience with Prime Minister Stephen Harper, the ultimate Iron Man of party leaders, Chong finally got the bill passed in 2015.

It was a kind of legislative miracle — the Reform Act, a law that placed the fate of the leader in the hands of his own caucus.

Such a law in Alberta might have made Kenney more alert to rising discontent in his own group. The dissidents could have blown off steam internally, knowing they could fire him directly if he didn’t listen.

One reason it has never happened, and probably never will, is that Alberta leadership contests have evolved into money-raising events for the party itself.

With membership sales and event fees, the April 9 vote will rake in a minimum of $300,000 for UCP central (although the party says it will just recover costs.)

On Tuesday, Jason Kenney almost laughed at the ironies. Briefly.