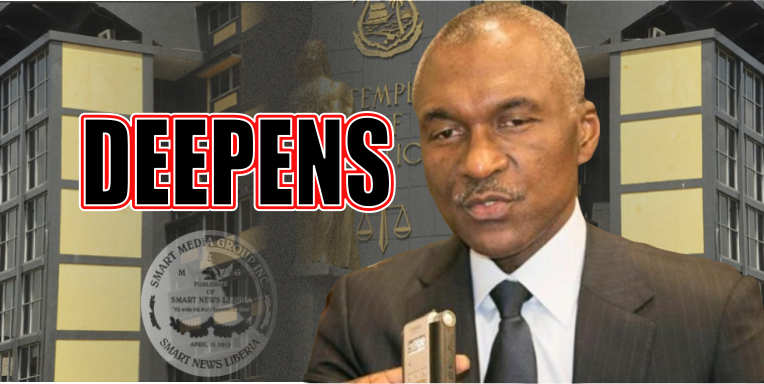 The Political leader of the Alternative National Congress (ANC), Alexander B. Cummings has commissioned a forensic investigation into allegation of the alteration of the Collaborating Political Parties (CPP) framework document despite the case being at the level Supreme Court of Liberia.

Mr. Cummings who is being prosecuted along with two other officials of his party on allegation of tempering with the CPP framework document stated on his official Facebook page that his decision is intended to protect both his reputation and integrity, at home and abroad.

Notably, the firms contacted to do the forensic investigation with the mandate to made public its findings upon the completion of their investigation include OMNIA, led by Cherie Blair CBE QC and ALACO Ltd.

However, the ANC political leader commissioning of a forensic investigation of the document followed the Monrovia City Court acceptance as evidence, a photocopy of what is to be considered the Collaborating Political Parties’ (CPP) Framework document presented by the National Elections Commission (NEC) chairperson, David Browne-Lassanah.

The NEC chairperson upon taking the witness stands stated that her presentation of that copy of the framework document to the court was on grounds that it was the exact document filed with the Commission by the opposition Collaboration.

She further informed the court that all political parties and alliances are only required to submit documents before the National Election Commission whether a photocopy or an original copy.

By now, many of you have heard that on January 3, this year, a writ of arrest was issued for me, and later, for the Chairman and Secretary-General of our political party, the Alternative National Congress (ANC). We have been falsely charged with “forgery and criminal conspiracy.”

Five (5) months later, our accusers, which include the Weah Government and the leaders of the Unity Party (UP) and the All Liberian Party (ALP), are yet to point to what “criminal conspiracy” occurred, and what “forgery” we committed. We know our accusers cannot prove their politically-motivated charges because we did not commit any crime – it is as simple as that.

What the failed Weah-led administration, and those working for them in the opposition to get Weah re-elected have actually sought to do against me and the ANC, has been to distract us, deceive the country, deny the Liberian people the democratic exercise of real choices in 2023, and smear my name to say I am like them and no different.

You the people have to make the real choices to take us forward and not backward as well as to change the direction of our country and improve the lives of the Liberian people. Unfortunately, the Weah administration and their regime collaborators have involved and are seeking to unduly entrap the courts, which should be the anchor of our cherished and hard-won democracy, into their scheme of dirty and dangerous politics to stop me, weaken the opposition and undermine the Liberian people’s true desire for real change. I am determined not to let them succeed.

For the better part of 40 years of my life, I have worked professionally in high leadership positions without a taint on my reputation or a question to my integrity. I value and will fight with everything I have been blessed to have to protect and defend my family, reputation, honor, and integrity.

In fact, these values of leadership which I cherish have emboldened me to seek the presidency so as to meaningfully fight corruption and end the mismanagement of our natural wealth for which our country is sadly so corrupt and our people are unacceptably so poor.

As a Liberian citizen, I am particularly embarrassed for our country and our courts. I feel it a sacred duty to stand up for our courts in an unfortunate attempt to abuse, undermine its integrity and involve it in the political schemes of the administration and its opposition supporters.

This, too, is why, despite the many orchestrated delays and obvious prosecutorial misconduct, including claims and counter claims between the Minister of Justice and the Solicitor General, I have diligently and faithfully obeyed the court’s orders and personally attended trial sessions.

We know that the lack of evidence necessitated the quashing of the initial writ of arrest against me but only to see it reissued, obviously in pursuit of undermining our message of change which is acceptable to the Liberian people.

The truth matters, and ultimately, the truth vindicate. I believe the truth in this case will matter to the Liberian people and the international community, as it does to me, and accordingly, will vindicate me and my colleagues.

This is why I do not fear the truth coming out openly, forensically and independently. It is also clear to me that after 5 months of the best effort to prove a misdemeanor by the Weah Ministry of Justice, with support from the leaders of the UP and the ALP, all they can muster are delays, distractions and deception – everything except the truth.

They know they have wasted the country’s scarce resources and are entrapped in a web of lies and a political conspiracy which are unhelpful to the country’s image and unhealthy for our democracy.

It is also clear to me, after 5 months of courtroom theatrics and grandstanding by the government prosecution, which is now joined by the UP lawyers that the Judiciary did not invite this on themselves and would wish not to be used to help the selfish political ends of the administration and their conniving political bedfellows.

Therefore, in a fearless commitment to protecting my reputation and integrity, both at home and abroad, and as a duty of my Liberian citizenship, I have commissioned an independent international forensic investigation of the allegations with two internationally-reputable organizations.

OMNIA, led by Cherie Blair CBE QC and ALACO Ltd, both of which have established global credibility and recognition in the conduct of such truth-finding and independent forensic investigative works.

Convinced of the facts and our innocence, I have directed that their findings be made public without reference to whether or not it supports my public claim of innocence. Liberians deserve the independent truth, as does many of my colleagues, friends and partners with whom I have had the privilege of working professionally, at home and around the world.

I hope the independent truth will not just set me and my colleagues free, because we have been falsely and maliciously accused, but also that it will help to set our country free. We need to clean up our politics and move our society from unjustly seeking the downfall of friends and foes. Politics is about lifting people and country up.

It should not be about undermining the interest of the people, destroying our democracy or putting our country down, as our accusers are doing and some have always done in our country. Politics should also never cause our courts to be weaponized against anyone who disagrees with a government so that a failed leader gets re-elected not on the account of his/her stewardship but on legal subterfuge and political deception.