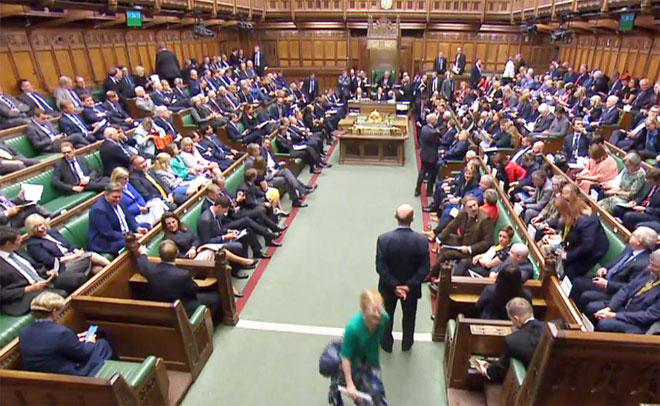 The allegation came as at least 56 MPs, including three ministers, are probed over allegations of sexual misconduct by parliament’s own complaints office. — AFP photo

LONDON (April 27): Britain’s ruling Conservative party said today that it is investigating claims one of its MPs watched pornography on his mobile phone in the House of Commons chamber.

The allegation came as at least 56 MPs, including three ministers, are probed over allegations of sexual misconduct by parliament’s own complaints office.

The Conservative party has been accused of misogyny after the Mail on Sunday last week quoted unnamed Tory MPs accusing the deputy leader of the opposition Labour party, Angela Rayner, of trying to distract Prime Minister Boris Johnson with her legs.

“The chief whip is looking into this matter,” a statement from the Conservative whips’ office, which is in charge of party discipline, said.

“This behaviour is wholly unacceptable and action will be taken.”

It was not clear whether the guilty MP was a minister or a backbencher.

Johnson was asked about the alleged sexual misconduct in parliament and said any minister found guilty would lose their job.

“Of course, sexual harassment is intolerable,” he said.

“It’s quite right that members should now have a procedure by which they can bring that to the attention of the highest authorities and I think that’s a good thing.

“And of course it’s grounds for dismissal.”

Johnson’s press secretary insisted that the Conservative party does not have a problem with sexism.

“You will have heard the PM address this explicitly in parliament today and over the last few days, saying there is absolutely no place for such behaviour and this cannot be tolerated in any workplace,” she told journalists. – AFP