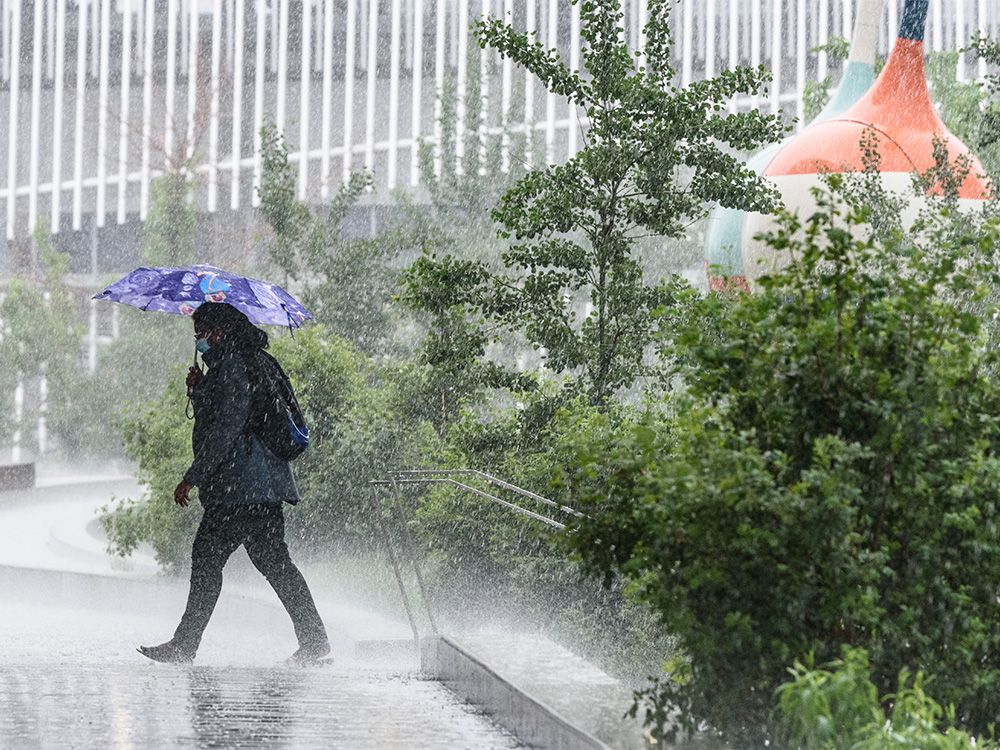 That’s according to Calgary Emergency Management Agency chief Sue Henry, who said the situation has improved overnight but that evacuation orders are still a possibility for some low-lying communities along the Bow River.

“As of this morning, things are looking a little bit more positive than they were looking yesterday,” Henry told an impromptu meeting of city council’s emergency management committee Tuesday morning.

“We are not completely out of the woods. We still have a lot of work to do. But the forecast is looking a little bit better, particularly for areas along the Bow River.”

Calgary is currently under a state of local emergency, declared Tuesday in response to heavy rainfall posing a flood risk in some parts of the city. The declaration gives the city exceptional powers to deal with emergencies, including allowing police and fire crews to go door-to-door to inform residents of evacuation orders.

After continuous rainfall overnight, Henry said CEMA is expecting to see heavy rain until about 2 p.m. Tuesday, totalling 25 to 35 mm between the morning and that time. The precipitation is then expected to gradually taper off throughout the afternoon, ending around 6 p.m.\

Meanwhile, Environment Canada has issued a wind warning for Calgary, with winds gusting up to 90 km/h forecasted beginning Tuesday afternoon and ending in the evening. The federal agency said wet ground from rainfall could increase risk of tree falls, and warned damage to roof shingles and windows is possible.

Water levels on the Elbow River are expected to crest Wednesday morning, and aren’t thought to pose any flood risk. On the Bow River, water will peak Wednesday evening, and could still result in some flooding.

An additional forecast for the Bow River is expected this afternoon, at which point the city will determine whether an evacuation order is necessary.

Calgary Police Service deputy chief Chad Tawfik said residents and businesses in Sunnyside and Bowness should be prepared to see police, search and rescue or fire officials going door-to-door to notify residents of potential evacuation orders. He added police and social agencies are talking to unhoused Calgarians in encampments near the Bow River about flood risk.

Henry said CEMA would aim to give residents a 26-hour notice before the high-water period if evacuations take place.

“We’re trying to give folks as much time as we can without causing any panic and causing the need for an evacuation to occur when it doesn’t need to,” Henry said. “We’re looking at having that additional forecast in place this afternoon and making the decision at that point in time.”

Calgary water resources director Francois Bouchart added the Bow River is “close but below the threshold” which would trigger an evacuation.

Some city flood mitigation efforts have already begun across Calgary, most notably the construction of a temporary berm on Memorial Drive. That barrier is 88 metres of clay near 3rd Street N.W. which connects to an existing berm to the west.

That temporary barrier was erected out of an abundance of caution, Bouchart said, following water flowing from that area west into Sunnyside during Calgary’s 2013 floods.

Memorial Drive is closed indefinitely between 10th Street N.W. and Edmonton Trail N.E. Officials said they are monitoring another weather system currently expected to hit Calgary June 20, which could impact their decisions on when to remove the berm and reopen the road.

Some low-lying pathways and park areas along the Bow River are also closed due to flood risk; a map of those closures can be found on the City of Calgary’s website. The city also dropped the level of the Glenmore Reservoir in anticipation of the downpour.

The city is also deploying pumps in areas including Sunnyside and Bowness as well as at a few points on the Elbow River to mitigate flood risk, including from water coming through storm sewers. Water levels in other low-lying areas like Bridgeland and Inglewood haven’t reached the threshold required to begin water pumping.

Part of the reason for a more optimistic flooding forecast locally is due to some precipitation in the Rocky Mountains falling as snow, Bouchart said.

“The fact that we have snow that fell rather than rain has meant that we’re actually looking at a better situation than what we’d anticipated,” he said.

At least two evacuations have taken place already, in houses identified as being at risk below the McHugh Bluff, between Crescent Heights and Sunnyside. The city recently closed a walking path on the bluff until at least fall 2023 due to slope stability concerns.

Calgarians are asked to call 311 to report flooding in non-emergency situations.

Elsewhere, Alberta Environment has issued numerous flood warnings, watches and advisories to the west of Calgary. Those include a flood warning on the Little Red Deer River, and a flood watch at the Bow River at Banff, Canmore and Exshaw, and on tributaries to the river upstream of Calgary. No impacts to Fish Creek are currently expected, after the province downgraded a flood warning to a high streamflow advisory.

South of Calgary in Foothills County, emergency officials say several flood warnings have been downgraded to advisories, including in the Town of High River. The area was among those hit hardest by the 2013 floods.

“I think it’s brought back some bad memories from 2013, but at the same time, I think people also know they’re better prepared than they were back then,” said Foothills County emergency services manager Darlene Roblin.

“We’re moving in the right direction at this point, so we’re thankful for that, but it’s always good to prepare for that worst-case scenario.”

Alberta’s River Forecast Centre said as of about 10:45 a.m. Tuesday, in areas of heavier precipitation, there has been 60-80 mm of rain, with local higher amounts of up to 110 mm recorded west of Calgary.