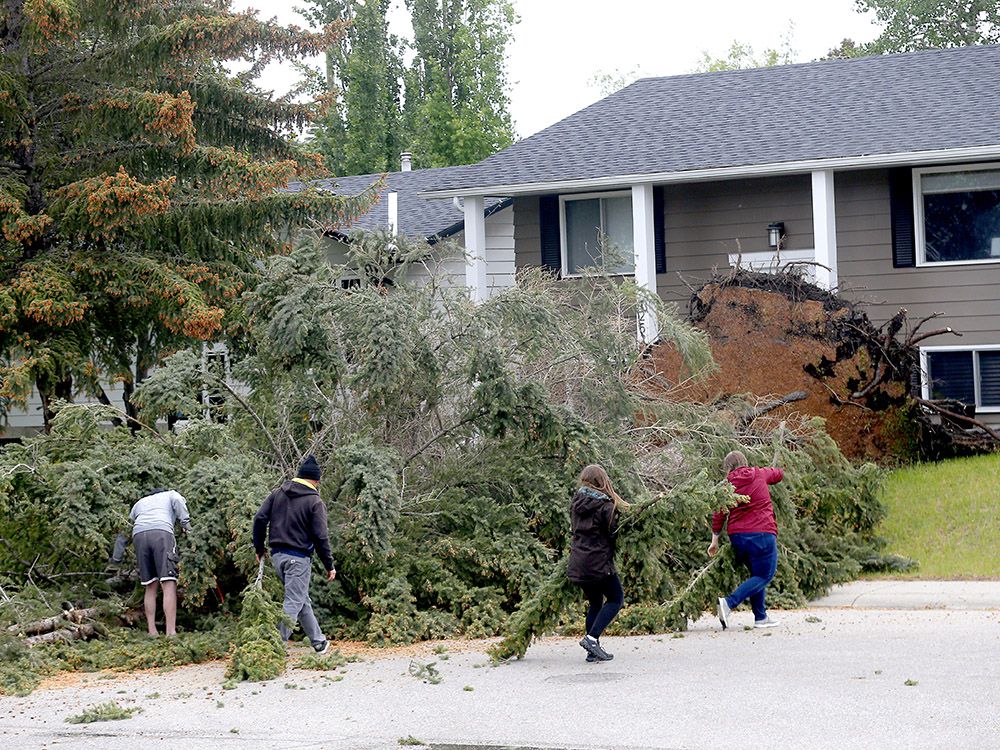 The storm system which battered Calgary over the past several days has come and gone, leaving behind a trail of power outages, downed trees and water pooling — but no overland flooding or evacuation orders.

Environment Canada ended both wind and rainfall warnings which had been in effect for Calgary Wednesday morning.

The previous 48 hours saw the city receive 70-80 mm of rainfall, with up to 100 mm falling in some localized areas. Wind gusts of more than 90 km/h tore down trees and knocked out power Tuesday, and wind blowing up to 70 km/h was forecasted for Wednesday.

It was less precipitation than city officials expected days ago, when flood worries spurred the city to declare a state of local emergency which remains in effect. That declaration allows city officials to go door-to-door to inform Calgarians of evacuation orders, and gives water crews access to property to protect critical infrastructure.

The state of local emergency was declared Monday, and will be in place for two weeks unless the city rescinds it before then.

The Elbow River has reached its peak flow, and isn’t expected to get any higher. The Bow River, meanwhile, was slated to peak Wednesday afternoon and will remain high for days and its water level is expected to fluctuate.

A boating advisory remains in effect, with Calgarians asked to keep off both rivers until water returns to safe levels.

“While we received less precipitation than expected we want to remind Calgarians to stay off the river and continue to exercise caution while the local state of emergency is in place,” Calgary Emergency Management Agency chief Sue Henry said in a news release Wednesday.

“The flood resiliency planning and mitigations undertaken since 2013 have continued to support our response to this weather event.”

Smaller rainfall counts than anticipated paired with some precipitation falling in the Rockies as snow mitigated flood impacts in Calgary, city officials said.

It was Tuesday’s windstorm, coupled with ground softened from the continuous rainfall, which caused the most damage across the city.

Cathy Guenther was at work Tuesday afternoon when she got a text from a neighbour that a tree in her front yard had fallen down.

The tree landed on the road where her car would have been, and blocked off the street at Lake Sylvan Drive S.E.

Fire crews weren’t immediately able to remove the tree due to a heavy volume of calls elsewhere, so friends and neighbours on the street set to work cutting branches and hauling them off the road. Guenther said it showed how quickly Calgarians will come together to help one another.

“Within 20 minutes, there were a dozen people out helping us. Some friends came over and helped, but most of them were neighbours, some who we hadn’t met before,” she said. “I think we’ve got some friends out of this that we never had before, so it was pretty cool.”

The Calgary Fire Department responded to more than 200 calls related to the weather between Tuesday and Wednesday morning.

That included 115 calls for wind-related hazards — mostly downed trees which blocked roadways, but also construction materials blown off buildings and other hazards on the roads.

Fire crews alongside Enmax responded to 91 electrical hazards. Some of these were separate incidents where trees fell onto power lines, while others involved downed lines. There were also five calls related to lightning strikes.

“Our first priority is always immediate scene safety, safety for the public, and we assume that any electrical wires that are involved in the incident are energized,” said fire public information officer Carol Henke.

The city closed several of its low-lying parks due to flood threat: Rideau Park, Bowness Park, St. Patrick’s Island and Prince’s Island Park. There’s no timeline for when those may reopen.

The River Cafe, located on Prince’s Island Park, shut down Monday and moved some perishables and equipment out of the restaurant in preparation of possible floods. The popular eatery sustained flood damage in 2005 and 2013, and owner Sal Howell said those actions, plus the creation of a tiger dam outside the building, represented a proactive approach.

“I don’t regret any of the steps we took, because we just can’t move quickly. If it had gone differently, we really could have been caught off guard, so I’m really happy to put the work in to move everything and mitigate that,” Howell said.

Enmax shut down power to River Cafe early Wednesday, and Howell said she’s now waiting to get the clear to get to work on reopening, which could happen as early as Saturday.

The 88-metre clay barrier is in place near 3rd Street N.W. and connects to an existing berm to the west. The road closure could remain in place into next week, after officials said Tuesday they are monitoring another weather system expected to hit Calgary on Monday which could impact their decisions on when to remove the berm.