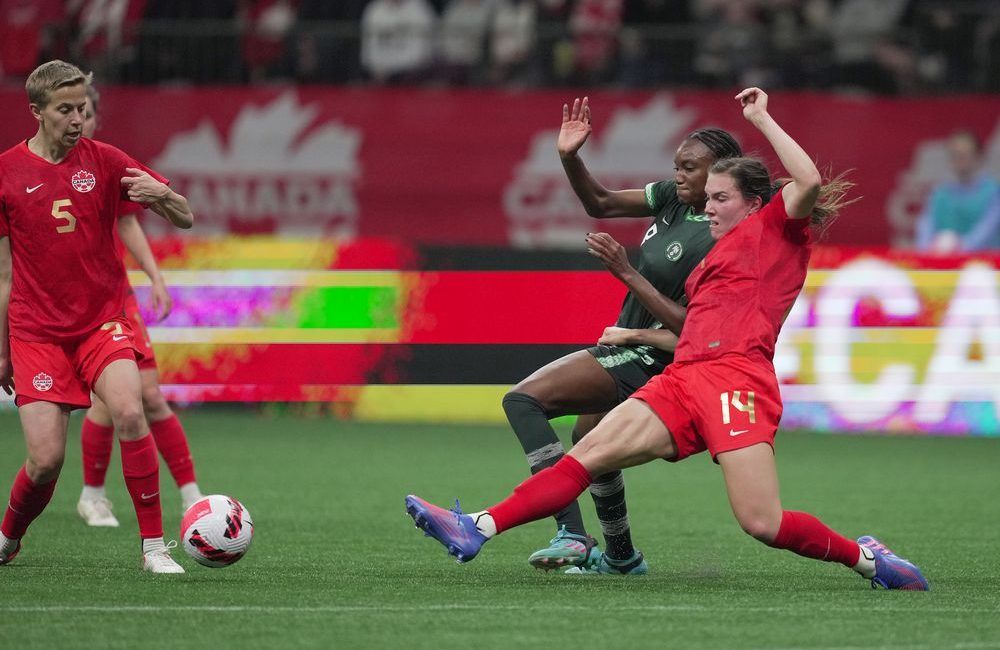 The jerseys were all different colours: royal purple, sunflower yellow, neon green and jet black. But the pink headbands they wore and the named stitched on the back were all the same: Labbé.

Stephanie Labbé’s family and friends, including fiancee Georgia Simmerling, were all kitted out in the goalkeeper’s jersey, and took up nearly a section to themselves at Friday night’s Canada-Nigeria women’s game, in what could be her final appearance wearing the Maple Leaf.

But there was a sea of red surrounding them, the 20,601 spectators the biggest crowd for a soccer game at B.C. Place this year, all came to pay homage to Labbé and her Olympic gold medal-winning teammates in the continuance of their Celebration Tour.

The result of the exhibition game with Nigeria was nearly immaterial to those who had assembled to watch as they were there to celebrate the gold, bid farewell to the retiring Labbé, and recognize the greatness of hometown hero Christine Sinclair, the all-time leading international goal-scorer in history.

But the team wasn’t about to let their stars have their moment blemished by a loss to Nigeria, the 39th-ranked team in the world, and they cruised to a 2-0 victory.

While this two-game series — which continues Monday in Langford at Starlight Stadium — is mean to be a commemorative moment, it’s also a much-needed tuneup for Team Canada as they head into Olympic and World Cup qualifying in a few months.

“We know that both the World Cup and this summer you don’t always play top 10 teams. Particularly, World Cups are very different to Olympics. So we have to be able to change gears,” head coach Bev Priestman said this week.

“And in many ways, this team historically struggled against not weaker opponents, just different opponents. (Those teams) asked different problems.

“We’ve got to get better at turning over these teams. These can be like the banana skins of a World Cup group or this summer as a World Cup qualification. It can be a Haiti, it can be a Jamaica, the difficult teams to play, so it’s all part of us learning moving forward and preparing for the big moments that have to come.”

There were plenty of big moments in the first half Friday, but no goals. Janine Beckie nearly connected with Sinclair twice, but they were thwarted first by goalkeeper Oluehi Tochukwu, then by a cross a few inches too long.

Canada dominated the chances in the opening 45, but Labbé was called upon once again the the 28th minute, when she stretched to push away a laser beam from Onumonu Ifeoma Chukwufunaya. Labbé, who retired from the pro game in January and is retiring after this series, subbed off to a standing ovation just a minute into the second half.

She watched from the bench as Deanne Rose set up Jessie Fleming for a clinical one-touch finish between defenders to open the scoring in the 51st minute.

Fleming, who plays for Chelsea in the women’s Premier League, dashed to the bench and leapt into her teammates’ arms in celebration.

Chilliwack’s Jordyn Huitema a few minutes after almost put Canada up 2-0 — or would have if the assistant referee had caught her goal-mouth scramble shot crossing the line before bouncing back out off Payne Nicole Oyeyemisi’s knee.

They got the second goal in the 72nd minute, with centreback Vannessa Gilles elevating above a crowd to smash a header home.

There was no score from Sinclair, though she came within a few inches of the 3-0 goal before subbing off in the 78th minute to, again, a standing ovation.

In the end the game played out as expected with the sixth-ranked Canadians outclassing the perennial African powers, who only had 13 players in camp on Wednesday. Four more arrived on Thursday, but the reinforcements didn’t make a difference.

Canada finished the game with 60 per cent possession and outshot Nigeria 23-6 (14-4 on target), stifling the Super Falcons and harassing them into just 71 per cent pass completion.

Nigeria’s two scoring chances — Chukwufunaya’s first-half shot and a curling effort labelled for the corner that Labbe’s replacement, Kailen Sheridan, masterfully pushed aside — both came from outside the box with Canada’s stout defensive play.

But it was exactly the kind of performance Priestman wanted to see as her team gets ready for this summer.

July’s CONCACAF Championship in Monterrey, Mexico doubles as both the qualification route for the FIFA Women’s 2023 World Cup in Australia and New Zealand as well as for the Paris 2024 Olympic Games. The women’s team swept the Kiwis in their exhibition games last year, then followed it up with a 1-1-1 record at the Arnold Cup where they tied England 1-1, lost 1-0 to Spain and posted their first-ever shutout victory of Germany with a 1-0 decision.