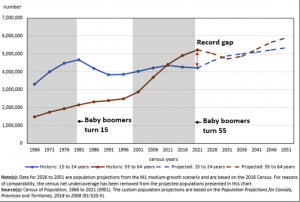 Canada’s population is growing older and is expected to keep aging rapidly in the years to come, according to the latest census data from Statistics Canada.

The 2021 national census shows seniors over the age of 85 make up one of the country’s fastest growing demographics. The population of that age group is expected to triple over the next 25 years.

The number of people over 85 has more than doubled since the 2001 census.

“Older Canadians are a growing economic and politically influential group,” says Statistics Canada. “They are staying healthier, active, and involved for longer.”

Bonnie-Jeanne MacDonald with the National Institute on Ageing says the impact could be particularly devastating because Canada’s future elders have not had as many children as previous generations.

The latest data also highlights the aging Canadian labour force with the working age population across the country now the oldest it has ever been.

The working age group is outlined as individuals between 15 and 64 and the data shows a growing number of that group is nearing retirement. More than 20 per cent of the working age population is now between the age of 55 and 64.

The number of people who are 65 and older grew 18 per cent since the last census data in 2016. That group represents nearly 1 in 5 Canadians, compared to only 16.9 per cent five year ago.

Canada is the first country to collect data on gender diversity in the form of a national census.

The latest census included a new question on gender and introduced an “at birth” precision to the sex question.

The 2021 data shows approximately 1 out of every 300 Canadians who are older than 15 identify as transgender or non-binary.

The figures will not only help shape government policy, but ensure non-binary populations are recognized where still ignored, said El Chenier, a history professor at Simon Fraser University in British Columbia who focuses on the historical treatment of homosexuality.

“When a government body like Statistics Canada says, ‘we’re gonna collect data on this,’ it literally says, ‘this exists and this is real,’ and people to this day continue to deny that trans people exist and that non-binary people exist,” Chenier said.