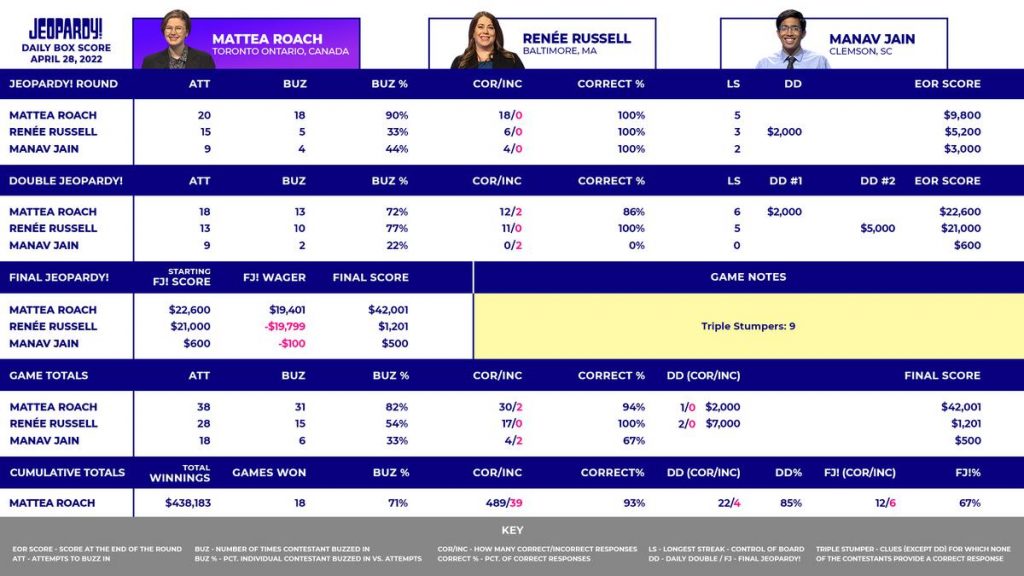 It allows the 23-year-old to face another pair of challengers Friday, when victory would move her up the ranking for top consecutive wins.

She currently has the eighth-longest win streak in the program’s history but one more puts her into a three-way tie with 2005’s David Madden and 2019’s Jason Zuffranieri.

The win cements an exhilarating star turn by the affable Canuck in edge-of-your-seat play.

That has included a recent nail-biting episode in which Roach squeezed out a victory by just US$1 – a reminder that it takes far more than just trivia smarts to dominate the game, according to former Canadian contestants.

Roach’s 17th win Wednesday came down to some careful wagering in the final clue about Irish poet William Butler Yeats.

After Roach’s third-placed competitor got the clue wrong, her second-placed rival bet his entire $13,600 bounty and won – tying him with the Toronto-based law tutor.

Roach, who spent part of her childhood in Halifax, also answered correctly but only bet $1, vaulting her by the slimmest of margins while netting $27,201 on top of her previous winnings of $368,981.

Brock University business professor Eric Dolansky, who filmed three episodes in February 2006 and won about $46,000, says a healthy lead can be blown by an ill-planned final round – even if you get the clue right.

The problem there is the only way the second-placed contestant could win is if they get the clue right and the leader gets it wrong.

“If I don’t bet everything knowing that you as the leader are going to bet enough to cover me, if we both get it wrong, I could still win. And so there’s a bit of game theory in there about how to wager final Jeopardy.”

Former “Jeopardy!” contestant Emma Badame, who won $15,000 over the course of two games that aired in March 2019, also recognizes “a kind of science behind wagering and betting” on the show.

“I didn’t read up on any of that stuff before I went and I kind of enjoyed watching Mattea because she seems to have a similar style,” chuckled Badame, a Toronto-based digital producer and marketing strategist.

“There’s whole chat groups and stuff on online that are dedicated to what people should wager and how they should have wagered.”

She points to single-game winnings champ James Holzhauer as a notable player to figure out how to maximize not just the final round but the mid-game wagers.

The 2019 champ famously dominated with big bets that paid off, and holds all 10 spots on the game show’s Top 10 list of single-game winnings.

Holzhauer also ranks second on the Top 10 list of highest winnings in regular-season play, with $2,462,216 collected over his 32-game streak. He’s second only to Ken Jennings who earned $2,520,700 but had a streak that ran twice as long at 74 consecutive games.

Dolansky says he finds that most contestants don’t bet enough on their “daily doubles,” noting it is “an opportunity to have a clue all to yourself.”

“One thing that first frustrates me to no end watching the show is that people do not bet enough,” he says.

“Remembering that most contestants will get most of the clues right given the chance, you have an opportunity to really separate yourself from the pack. And we saw this of course with James Holzhauer, who would make incredibly large bets.”

Dolansky argues that not wagering big could keep a contender from victory. That’s because heading into the final round with less than half the cash than the leader is futile, he notes.

“There’s no way to win. So you need to build that up and potentially risk ending up with even less,” he says, noting the second and third place finishers take home a flat rate regardless of their final tally.

“There’s a certain amount that they get to take home so you might as well go for it.”