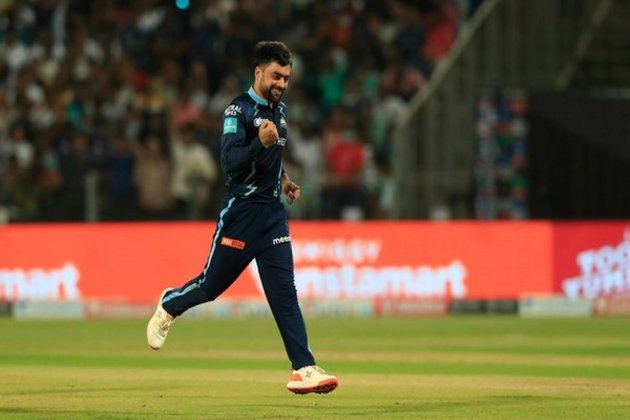 Pune (Maharashtra) [India], May 11 (ANI): Gujarat Titans spinner Rashid Khan, whose four-wicket haul helped his side clinch victory against Lucknow Super Giants, said that he cannot afford to lose his line and length.

Gujarat Titans became the first team to qualify for Play-offs this season as they beat Lucknow Super Giants by 62 runs at MCA Stadium in Pune. GT bowled out LSG for 82 in just 13.5 overs in a low-scoring match in which they had scored 144/4 in 20 overs.

“Those couple of games which did not go well was all about my line and length. That was something I was missing in those games. The pace I bowl and action I have, I cannot afford to lose my line and length, it was about focusing on hitting the right area. The wicket was helping today with bounce and turn, but overall it was about bowling in the right areas. They (the pacers) have given us a platform where we can come and put the pressure,” said Rashid Khan in a post-match presentation.

Rashid further said that the team’s entire focus will now be on playing good cricket and enjoying themselves at the moment.

“In a chase like 140-145 you need to have a good powerplay and the seamers gave us that. This is a very crucial part of the competition, it is all about the process whether we win or lose, we should keep the same process. We have to get better day by day and have to keep doing good things. Now the focus should be on playing good cricket and enjoying ourselves,” he added.

Earlier, it was Shubman Gill’s knock of 63 runs which helped GT post a defendable target of 145 runs. Apart from Rashid, Sai Kishore and Yash Dayal scalped two wickets each and bundled out LSG at 82.

GT have 18 points with nine wins out of 12 IPL matches they have played. GT have made it to the playoffs in their first outing in IPL. (ANI)