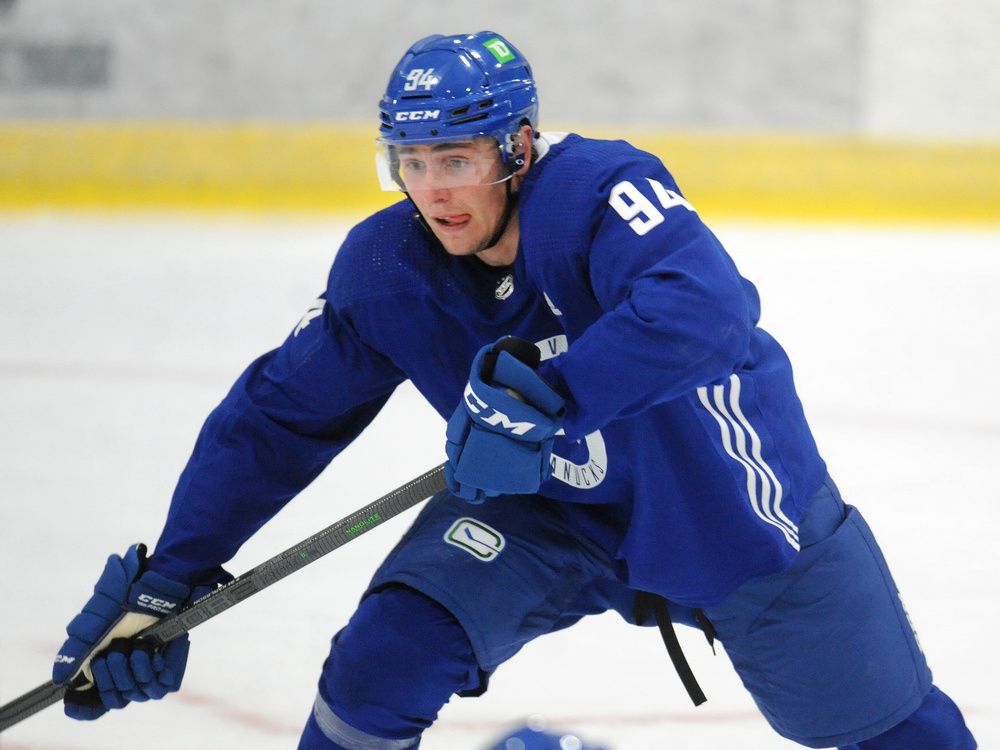 Linus Karlsson’s pre-pandemic experience could have sent the hotshot off the rails.

The Vancouver Canucks prospect was not only acquired in a notable 2019 trade that sent Jonathan Dahlen to the San Jose Sharks, his first development camp experience here lasted half a session because of a knee injury sustained just before his arrival.

No first chance to strut his stuff, grasp instruction and systems, bond with future teammates and acclimate to a new city, country and North American ice surface. And with COVID-19 shutting down the development camp the past two years, getting a read on Karlsson meant emailed instructions and critiques and dissecting video clips to chart his two-way game progress.

Fast forward and the 22-year-old Karlsson is in a much different and satisfying place.

He’s brimming with confidence after a sensational rookie season with Skelleftea of the Swedish Hockey League — seven goals in his first 12 games and eclipsing Elias Pettersson’s first year mark with 26 goals in 52 games — the winger also finished with 46 points to claim top rookie honours.

Karlsson is destined for Abbotsford of the American Hockey League, but he plans to make an impact at the Canucks main camp.

The irony of all this is not lost on anybody watching that 2019 trade progress.

Dahlen is now an unrestricted free agent after he wasn’t qualified by the Sharks on Monday after the winger had 12 goals and 22 points in 61 games last season. New general manager Mike Grier wants to go in a different direction and told reporters: “There’s a certain type of profile to mold this team and he doesn’t really fit.”

Meanwhile, Karlsson wanted to be at this camp and the Canucks want the 6-foot-1, 180 pound Karlsson to eventually become a top-six NHL roster staple.

“Mature kid, smart kid,” Canucks director of player development Ryan Johnson told Postmedia on the eve of this camp. “He has earned everything he’s got, but he’s going to have to learn the North American game and keep working on his skating. He’s got some great attributes and he’s going to be fine.

“He’s coming into this camp hoping to surprise some people and that’s what we want.”

Karlsson was a 2018 third-round by the Sharks and on the Canucks’ radar. But they chose centre Tyler Madden 68th overall and San Jose responded with Karlsson with the 87th pick. His methodical assent through the Swedish junior and pro ranks was a hint of what was to come. In the 2020-21 season, he had 51 points (20-31) in 52 games with Bofors IK of the Allsvenskan.

“It hasn’t been easy at all,” said Karlsson. “I played in the Swedish second league for three years and last year was in the highest league. It’s been a tough way, but I’m proud of that way, and I still have a bit to go. I want to play in the NHL. I’m going to try to do everything better.”

Karlsson knows improving his skating is a matter of technique and strength, and it will help him on the walls and get to the net better. But you can’t teach what he did last season to surpass Pettersson’s SHL record.

“I’m not surprised,” he said of the feat. “I know I’ve got it in me. Maybe I did better than everybody thought, but it was fun. I’ve played against men for a long time, so it was not new for me. Of course, it’s different to play in the SHL than the Allsvenskan. Everything is going faster and players are better. It was a step.

“I’m going to fight for a spot on the NHL roster and we’ll see what happens.”

Karlsson signed a two-year, entry-level contract to beat the June 1 deadline to retain his rights and part of the progress was adding penalty killing to his arsenal.

The right-shot winger was deadly on the left side of Skelleftea’s league-leading power play last season (28.5 per cent at one point) and he added a penalty-kill presence to round out his game and make him more valuable at the pro level.

It’s no different than what Pettersson did last season to negate power plays and become a short-handed scoring threat.

“Elias is such a complete player,” marvelled Karlsson. “I want to play as much as I can and the PK really developed me. I haven’t played that much before, but the coach believed in me and I improved that in my game. Hopefully, I’ll play the PP and PK over here, too.”

The bottom line is developing a multi-dimensional game to transfer to the NHL level. However, scoring has always been at the forefront for Karlsson and he aims to please, first in the AHL and then the NHL.

“I feel pretty comfortable,” he said. “I feel good out there and I’ll build on the camp and try to do better every day. I will score goals and take the puck to the net and stuff like that.”

And celebrate by leaping into the boards.

“I love to score and hopefully I’ll so some nice celebrations over here, too,” he laughed.

All the stuff you want to hear and hope to see.”