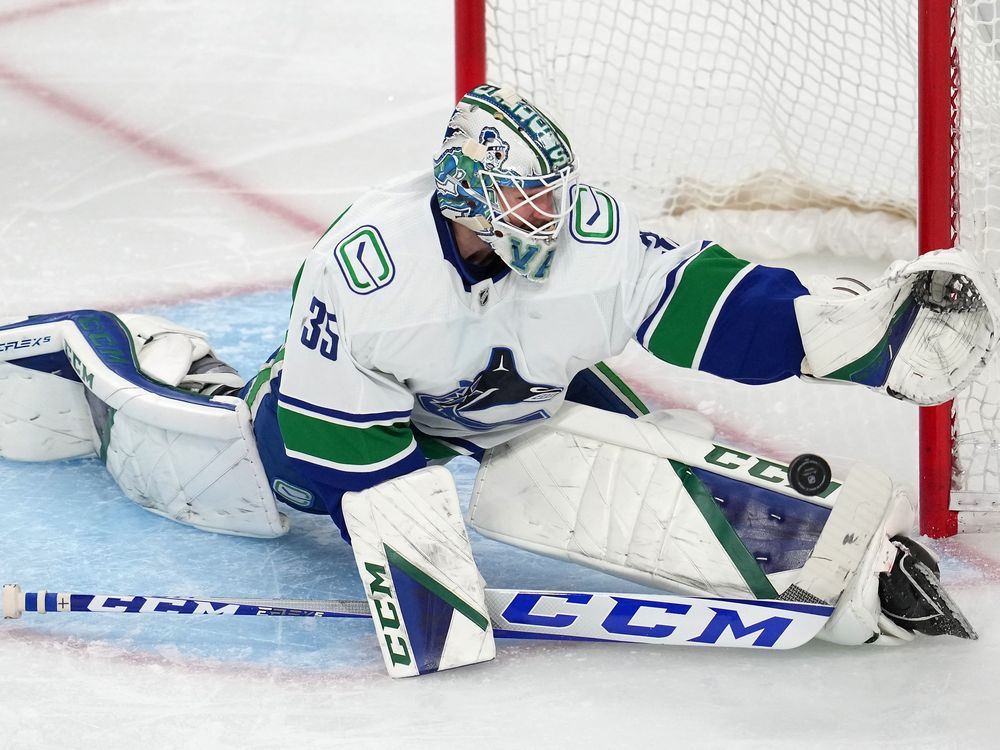 There are just 10 games left in the Vancouver Canucks’ season.

According to HockeyViz.com, they still have a three per cent chance at making the National Hockey League playoffs. Their impressive late-March road trip — wins over Colorado and Dallas, a gutsy overtime loss to Minnesota — had driven their playoff chances close to 20 per cent, but then two losses to the Blues and a home loss to Vegas sent their chances tumbling again.

Even so, they’re not entirely done.

Let’s take a look at some numbers behind this still-living playoff ambition.

On Feb. 27, the Canucks beat the New York Rangers in the Big Apple to launch a big four-game road trip. It was their third win in a row, the third of what would be six wins in seven games.

That sixth victory came March 9 at home against Montreal. That run put their playoff chances at 28.6 per cent, according to HockeyViz.com.

The Canucks had played very well in that stretch, but they couldn’t afford to let up at all if they were going to make the post-season.

And that’s why they have just a flicker of a chance at the playoffs.

The biggest reason for the Canucks’ fall-off since March 10 has been their five-on-five offence. They’ve scored on just 7.4 per cent of their shots, putting them in the bottom third of the NHL.

But their goaltending remains outstanding, having posted a 93.7 save percentage in that time, fourth best in the league.

Thatcher Demko’s importance to this team is no surprise.

If the Canucks win all of their remaining 10 games, they’ll have 98 points. They have a good chance of playoff qualification if they manage to run the table.

Even if they lose once and land on 96 points, they may still miss out.

They’re chasing three teams who are currently in playoff spots.

The Edmonton Oilers sit in second spot in the Pacific Division. They have 10 games left to play but already have 89 points. They have a tough schedule to finish the season, including games against Nashville, Dallas, Minnesota, Vegas and two against Colorado. Winning just five games would get the Oilers to 99 points, keeping them ahead of the Canucks.

The Los Angeles Kings sit in third spot in the Pacific Division. With nine games left, they have 82 points. If they end the season tied on points with the Canucks, the Canucks would need to have won more two games in regulation time than Los Angeles over these remaining 10 games to leap ahead in the standings. But L.A. has one more regulation win (29) than Vancouver (28).

The second wild-card spot is currently held by the Dallas Stars, who have 82 points and 12 games left to play. However, they have two fewer regulation wins so it’s tricky for them if they find themselves in a tie on points at the end of the season with the Canucks. They need to keep winning.

Also chasing Edmonton, L.A. and Dallas are the Vegas Golden Knights. Vegas also have just 10 games left, but they have 82 points and three more regulation wins than Vancouver. Six wins in their last 10 games would keep them ahead of Vancouver no matter what the Canucks do.

Early in the season, the Canucks’ penalty kill was setting historic lows. In November, they dropped as low as 60 per cent on the PK. If they had finished the season that low, it would have been the worst penalty kill in the 45 years the NHL has tracked penalty-killing success rates.

There was an early resurgence in the penalty kill after Bruce Boudreau took over as head coach and installed Scott Walker in charge of the PK units, but it regressed again in February. Brad Shaw took over the PK after Walker had to take time away from the team because of vertigo and the unit has become outstanding, due in large part to the work put in by both coaches.

The Canucks have killed off 85.7 per cent of their penalties since the beginning of March.

In that same time frame, the power play has been among the league’s best.

It has scored on one-third of the team’s man-advantage opportunities.

Even as they’ve struggled to string together wins, the Canucks’ special teams turnaround has given them a chance.

Tanner Pearson’s shot-attempts percentage since the March 21 trade deadline is an impressive 60 per cent. He’s mostly been stapled to J.T. Miller’s wing over the past two months and has been a positive contributor.

The Canucks’ best forwards have continued to dominate play. Just look at how many points Miller, Elias Pettersson and Bo Horvat continue to pile up.

At the other end of the dial is Juho Lammikko. The Canucks have controlled just 37 per cent of shot attempts with him on the ice since the league trade deadline. Think he misses wingers Matt Highmore (upper-body injury) and Tyler Motte (traded to the Rangers)?

Lammikko’s line had been putting in solid two-way efforts and contributing, too, so their loss is a quiet factor in how the Canucks haven’t been as consistent over the past three weeks.

Nic Petan has played 12 games since being called up from the American Hockey League’s Abbotsford Canucks on March 15. He’s been used as a fourth liner, and has one assist.

And even though he hasn’t been able to produce, Petan hasn’t seemed like a defensive liability.

Part of that is real, as the Canucks have taken 54.2 per cent of the shot attempts with him on the ice, a nice number for a player whose main job is to keep bad things from happening while the top players are getting a rest on the bench.

But some of that is also luck: Canucks goalies have saved 98.2 per cent of the shots taken against them while Petan has been on the ice.

That’s not going to continue, nor will his on-ice shooting percentage with the Canucks having scored on just 1.7 per cent of the shots taken with him on the ice. Usually it would be four or five times higher.

As well as the likes of Pettersson, Miller and Horvat are playing, some depth goals will be needed in this final stretch if the Canucks are to go 10-for-10.