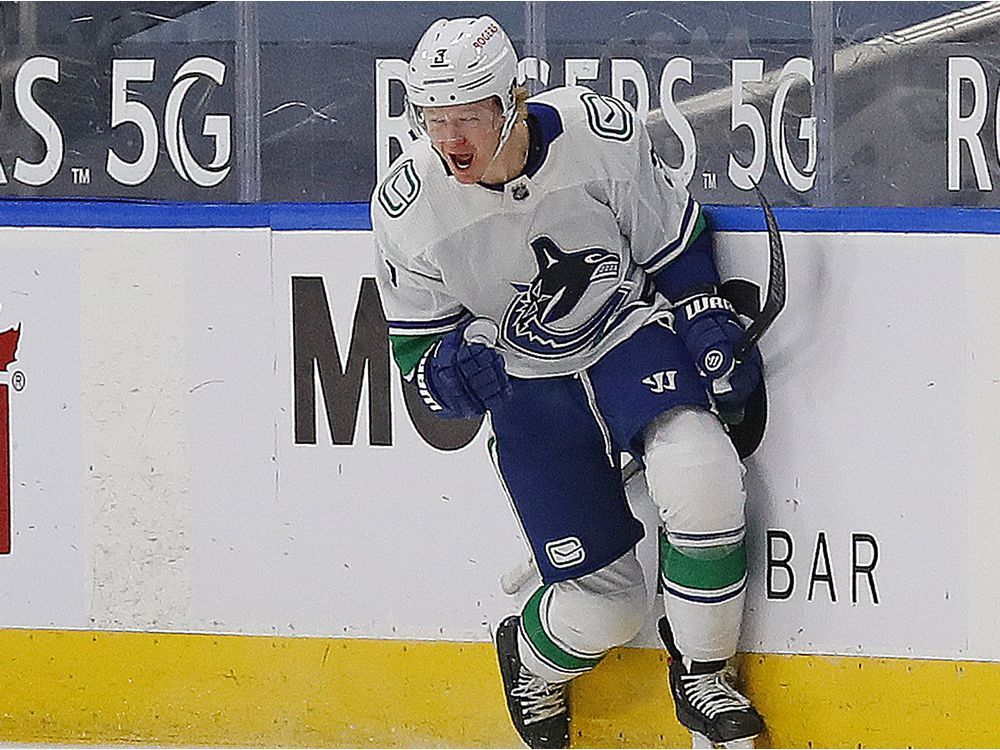 Jack Rathbone is a prime prospect for the Vancouver Canucks.

He’s expected to be a third-pairing fit next season and that would comfort a National Hockey League club in dire need of propping up its back end for the long term through better drafting and development.

Rathbone, 23, was a 2017 fourth-round selection, who turned injury patience into performance this season with the American Hockey League affiliate in Abbotsford. He quickly exited the zone without a map, jumped into the play and piled up 40 regular-season points (10-30) in just 39 games.

His 1.03 points per game and 19 power-play assists were fifth among league defenders, and he was also named to the AHL all-rookie team. It screams future NHL second power-play unit quarterback.

The bad news is that there isn’t another defensive prospect on the horizon. Among top 10 considerations, Viktor Persson had a solid rookie Western Hockey League season but went from No. 9 to No. 10, Jett Woo slipped from No. 4 to No. 8 while Joni Jurmo remained at No. 6. Jacob Truscott didn’t make the cut and Toni Utunen wasn’t signed.

There’s no quick fix to bolstering the back end with the 15th overall pick in the 2022 draft. When the Canucks’ new hockey operations department steps to the podium on July 7 in Montreal, a trio of defencemen should pique their interest.

Pavel Mintyukov of Saginaw (OHL), Kevin Korchinski of Seattle (WHL) and Owen Pickering of Swift Current (WHL) bring different dimensions. And if they’re still on the draft board, they merit consideration as the best player available who can also fill a pressing need.

Long-serving NHL prospects scout Shane Malloy is author of ‘The Art of Scouting’ and is working toward a PhD in inter-disciplinary development studies. He believes the Canucks should stockpile defenceman. Especially without a second-round pick (47th overall) that went to Arizona in last summer’s Oliver Ekman-Larsson trade and was then transferred to Minnesota.

“The biggest need is defence and, honestly, it’s not even close,” Malloy said Wednesday. “If I was running the draft for Vancouver and if there’s a grouping (of players), I’m taking the defenceman first and every time. And because they don’t have that second-round pick, I would seriously be looking at Russian and European defenceman and those going to college in the third, fourth, fifth, sixth and seventh rounds.

“Those players may have warts and things to work on and you need a longer time for them to develop They can’t be in the American Hockey League at age 20. You don’t want that. Regardless of how talented they are, it’s baptism by fire and really challenging. At the earliest, it’s 21 or 22 for the AHL.

“You have to be patient with your draft model. They (Canucks) have no choice. If they expect these draft classes to be ready in two or three years, they’re kidding themselves. It’s not going to happen.”

The Canucks have some level of interest in left-winger Liam Omgren, who can also play centre and had 58 points (33-25) in 30 games this season for Djursgardens of the Swedish junior loop. They also may like centre Marco Kasper, who split last season between Rogle BK Junior and Rogle BK Angelholm of the Swedish Hockey League. He had a combined 24 points (13-11) in 58 games.

However, Malloy measures long-term value of a player who projects as a No. 3 defenceman over one who may develop as a second-line centre.

“I’m taking the defenceman every day, stressed Malloy. “Look how much it costs to trade for a No. 3 defenceman or get one in free agency? It costs you an arm and a leg, so to get one in the draft you don’t even think twice.”

Korchinski is a 6-foot-2, 185-pound left shot. The Saskatoon native is calm, makes the smart play, with tape-to-tape transition passes spawned by good edge work. He had 65 points (4-61) in 67 games this season with the Thunderbirds.

Pickering is a 6-foot-5, 179-pound left-shot project who moves well and uses reach and range to transfer over into good offensive instincts. He managed 33 points (9-24) in 62 games this season with the struggling Broncos.

“Would I take Pickering in the first round? Yes, I would,” said Malloy. “But the other two have a greater potential upside. The floor for all three is around the same, but the ceiling for Mintyukov and Korchinski is higher because of their offensive potential.

“Mintyukov could go back to Russia and play a couple of pro years before coming over. So there’s a greater potential runway in his development.

“With Pickering, you have to weigh the value of a good player on a bad team and having to face the top lines all the time and not having insulation from the forward group. That’s what you have with players coming out of the U.S. National Team Development Program like (draft prospects) defencemen Ryan Chesney and Seamus Casey playing with two of the top lines in all of the USHL.

“You have that forward insulation and it’s not that those players are defensive, they’re offensive and always have the puck. Pickering doesn’t have that at the same level. You have to change the metrics of how you value that.”

Read our Canucks Under the Microscope series