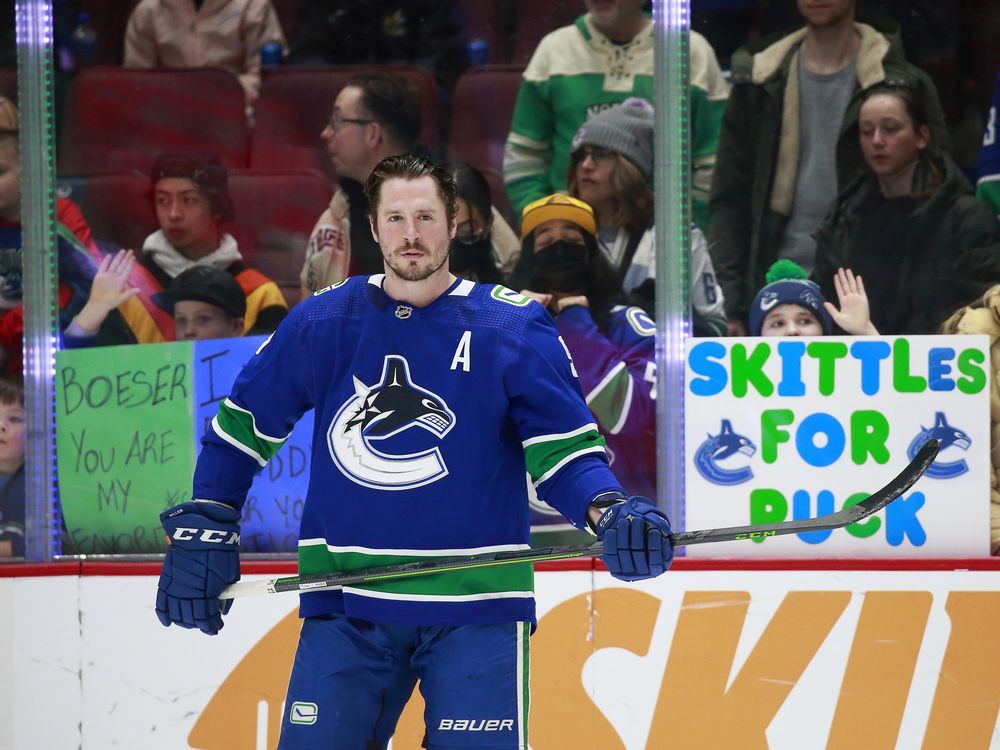 J.T. Miller is a pied piper.

By the dictionary definition, it means he induces others to follow or imitate, especially by means of extravagant promises.

What the Vancouver Canucks centre provides in pace, push, production and pride is difficult to duplicate. He promised that the club would and could play with a chip on its shoulder in this roller-coaster National Hockey League season to advance to the post-season.

“I definitely feel more hungry now than I’ve ever felt in my career,” Miller told Postmedia in the off-season.

He talked the talk and is walking the walk, but the odds to erase a three-point deficit in that playoff pursuit are daunting.

The Canucks need an 11-3-0 run in their final 14 games, must pass three teams of which two have games in hand, just to reach the required 95 points to secure the final wild-card berth.

For Miller, that target has always been reachable because this has been a season of reckoning and resilience on personal and team-oriented performance and culture levels.

The high-risk, high-reward forward will do something spectacular or stupid on any given night, but the relentless drive the 29-year-old has demonstrated during a highlight-reel career season has seldom waned and will eventually pay off in a lucrative contract extension.

“He’s a much better player than I thought he was,” Canucks coach Bruce Boudreau said a month after taking over the bench from the fired Travis Green. “He’s got so much pride, and when he doesn’t do well he knows it and gets angry about it, which I don’t have a problem with.

“I would take him on my team any time, any day.”

Boudreau did make an “unacceptable” claim when Miller was miffed at a non-call in overtime that contributed to the Canucks dropping a 1-0 decision in Calgary on Jan. 29. He dangled into the slot on a toe-drag attempt and absorbed a slash to the hands from Elias Lindholm.

Miller didn’t get his stick, get to the bench or get back to avoid an odd-man rush that resulted in Johnny Gaudreau’s winner.

And on Thursday in Minnesota, Miller was slow in overtime retreat after ringing a shot off the post in a 3-2 loss. But all that is like saying you don’t quite like the curve of Mona Lisa’s smile. Small stuff in the big picture.

Miller’s long-term value was painted Monday by some mea-culpa strokes in at 4-1 loss at St. Louis.

Instead of leaning on the convenient crutch of cliches — a 17-9 shot advantage in the second period and opportunity to close the gap in the third period — he owned his rare uneven performance. It was punctuated by a coverage gaffe on the third goal as the Canucks played their fourth game in six nights.

“I wasn’t as engaged as I needed to be for some reason — maybe a little tired — but I definitely have to take the onus to lead a little bit better,” said Miller. “It’s being mentally tough and whoever wants it more, typically wins the game.”

Miller has another year left at a bargain $5.25-million salary cap hit and $4.5 million actual salary (all figures are in U.S dollars). It’s part of what attracted trade deadline suitors earlier this month — especially the New York Rangers, who could have coughed up several assets to bring Miller back to Madison Square Garden.

The Canucks know they can’t allow their catalyst on the ice, on the bench and in the room explore free agency. He has 34 points (12-32) in his last 20 games and is on pace for a career-high 34 goals and 99 points. He’s 11th in league scoring and tied for the lead with three overtime goals.

Miller also tops the Canucks with six game-winners, has won 53.4 percentage of his faceoff draws and is a special-teams staple with seven power-play goals.

Creating cap space to sign Miller to an annual average value of $8 million over five or six years — the going money and term rate against comparables like Tomas Hertl and Mika Zibanejad — is vital because Miller has outperformed the duo the last three seasons and is more important to his club on a game-by-game basis.

What does that mean for the Canucks?

They will need to get creative because there’s restricted free-agent Brock Boeser and that $7.5 million qualifying offer, plus Bo Horvat’s extension that expires after next season and carries a current $5.5 million annual cap hit.

To find $5 million incrementally to retain the trio means getting $3.6 million of dead money back next year, having the cap ceiling go up by $1 million this year and another $1 million the following year.

That could mean Miller fitting into a six-year extension as an $8.5 million annual commitment, Horvat getting seven years and a $7 million annual value and offering Boeser $6 million annually and shorter term, or trading the right-winger.