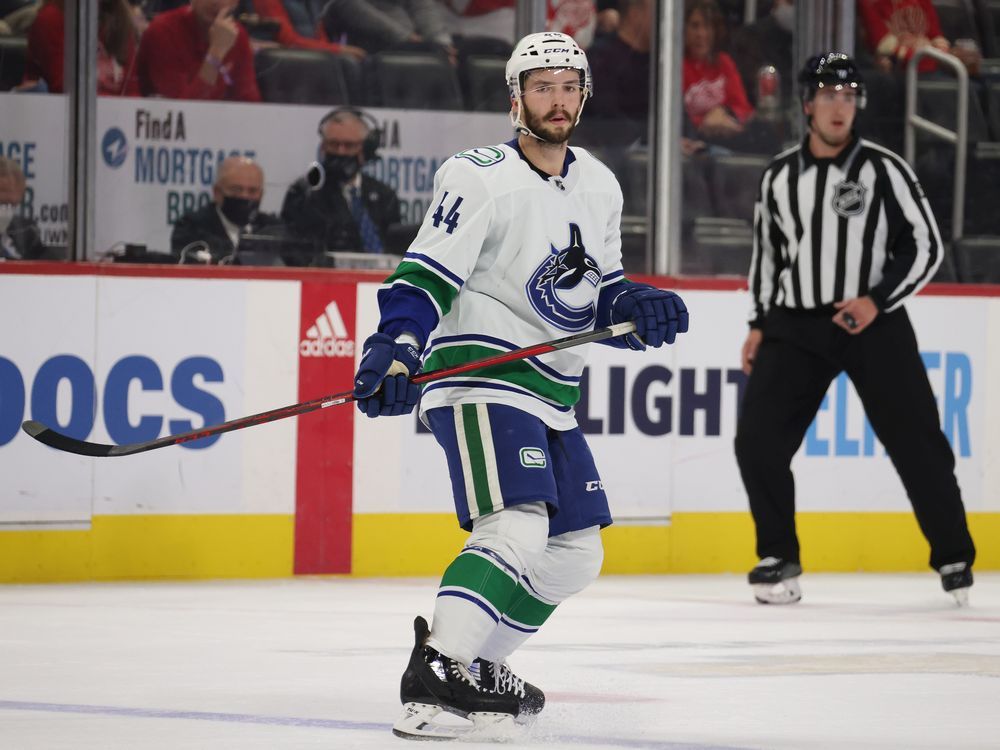 Communication is crucial in any defensive pairing, and Kyle Burroughs couldn’t ask for a better vocal alignment should he play Wednesday in Las Vegas.

The Vancouver Canucks defenceman, who missed 19 games with broken ribs after being run hard into the end boards on his first shift Feb. 19 by Anaheim Ducks enforcer Nicolas Deslauriers, was paired with talkative veteran Brad Hunt in practice Tuesday.

The trickle-down effect of Quinn Hughes missing with a non-COVID illness had Travis Dermott lining up with Tyler Myers and Oliver Ekman-Larsson with Luke Schenn. That left Vancouver native Burroughs, 26, with always-enthusiastic Maple Ridge product Hunt, 33, who has never had a bad day.

“I’ve known Brad for a little while and the one thing about him is that he’s a talker and easy to play with,” said Burroughs. “He’s a real reliable guy and awesome to play with. It’s super easy for me because with a guy like that you always know where he is because you can always hear him.

“He’s a good guy for me to be around right now, to see the ups and downs because he’s had them all. He’s a good role model.”

Burroughs went from lineup option to a staple this season and what that means long term remains to be seen. A new hockey operations department has new views on the long journey to improve, and the back end is one of its first priorities.

Burroughs has another year left on his two-way deal that pays US $750,000 at the NHL level and US $500,000 in the AHL. He knows getting over the rib injury was one thing, but impressing down the stretch is more important.

“It was a hard hit and hurt a bit and just kind of an everyday play that happens a lot in games and, unfortunately, I took the worst of it,” he recalled. “I knew right away that something wasn’t right, and it wasn’t the worst-case scenario, but it wasn’t good either. It took time to heal and that was the frustrating part.

“I just want to be an energy guy and help lift the team up.”

Canucks coach Bruce Boudreau has had a long enough look at Burroughs to believe that there’s always roster room for what the seventh-round pick of the New York Islanders in 2013 is willing to provide. He has five points (1-4) in 36 games this season and an edge.

“Before he was hurt, he was playing very well,” said Boudreau. “He was aggressive and played with energy and enthusiasm. He plays a simple game.”

As for facing the Golden Knights on Wednesday, getting to a club that has won five straight and seven of its last 10 won’t be easy.

“If we play 60 minutes, we’ve got a good chance and the last two periods (Sunday) they had maybe three or four scoring chances and we should have won in regulation,” reasoned Boudreau.

OVERTIME — With Hughes questionable for Wednesday’s game — Boudreau said if the star blueliner felt better Wednesday he would fly commercial and join up with the team — the Canucks called up Jack Rathbone from the AHL Abbotsford Canucks under emergency conditions. … The Canucks announced Tuesday that, in light of changes in provincial health guidelines, fans and employees will no longer have to show proof of vaccination to attend games at Rogers Arena and Abbotsford Centre.