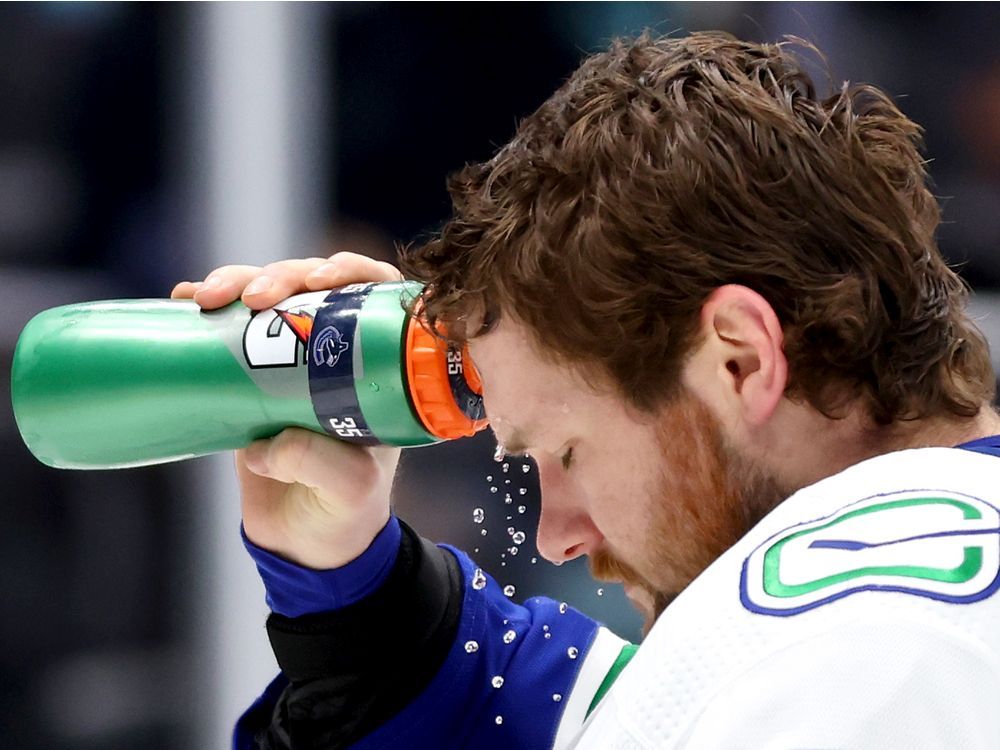 As the last line of defence, the ability to advance technically and not lose your way mentally in an unforgiving position — especially in the Vancouver fishbowl of ongoing scrutiny — is why Thatcher Demko’s seasons stands out on several levels.

And had there been 2022 Winter Olympics participation by the NHL, he would have been a Team USA lock.

The stellar Canucks stopper not only embodies Masterton attributes of perseverance, sportsmanship and dedication, he has taken preparation, performance and humility to higher levels. It has kept his club in the playoff chase conversation, but as much as the numbers tell one story, the man behind the mask tells another.

Vancouver chapter members of the Professional Hockey Writers will submit top-three selections for the Masterton on Monday. There are several deserving candidates and my podium is Demko, Bo Horvat and Quinn Hughes.

When Demko hit the 30-win plateau for the first time Saturday with an impressive 36-save outing to backstop a 4-2 win over the San Jose Sharks, the post-game celebration was muted because he was having treatment.

He could have spoken about how Roberto Luongo was the last franchise stopper to hit that mark with 31 wins in 2011-12 — he did it six-consecutive times here — or how Dan Cloutier, Kirk McLean, Alex Auld and Gary Smith also had 30 wins with the Canucks.

For Demko, it would probably beat talking about himself, even though his current 2.64 goals-against average and .917 saves percentage are career bests in the NHL. They rank eighth and seventh respectively among those with at least 45 starts. Demko is also third in shots faced and saved.

To achieve this requires pre-practice dedication with goalie coach Ian Clark, and a creature-of-habits focus that must make mandated days off from practice seem like a trip to the dentist for a root canal.

When Demko doused doubters with a career-best, 51-save showing in 3-2 win Feb. 12 over the Toronto Maple Leafs on Hockey Night in Canada, he could have boasted about the achievement.

“I still think there is some stuff I can clean up,” he said. “As I get my reps, that should sharpen itself out.”

It was a short and telling response by the 26-year-old San Diego native. He often has to address mundane and repetitive queries about shots that beat him — the last thing any stopper wants to dwell upon.

We observe Demko’s quick stutter steps to adjust positioning and tracking, his rapid post-to-post movements to seal up the short side and remarkable flexibility and rebound recovery.

We see what we see, but do we really understand it all?

“We’re all adults and have ceilings on our physical capacities, and with the mental side of things, there’s no ceiling with the capacity to keep building in that regard,” Demko said in early January after a torrid 7-1-0 record in December that featured a 1.72 GAA, an eye-popping .946 saves percentage, one shutout and a career-high, seven-game win streak. “Great goalies in the league, that’s what they’re always preaching.

“Especially when things aren’t going great and you (media) guys are asking us silly questions, it would be easy to get frustrated. Anyone doing interviews, you’ve got to have some poise about you. You have to be able to settle yourself down and handle certain situations.”

It hasn’t been all gravy for Demko.

There have been too many nights where the Canucks coughed up the first goal and chased games. However, in a season of resiliency, and knowing another clash with the Vegas Golden Knights on Tuesday at Rogers Arena is just the latest must-win meeting, there has always been the ability to be the difference-maker.

Clark still marvels at Demko’s continuous quest to ensure the odd quirk in any performance doesn’t mess with the mindset and become a bad habit.

OVERTIME — Brock Boeser (arm) and Tanner Pearson (upper body) were scheduled to skate Sunday during a team day off to test their recovery from injuries sustained April 3 and Thursday respectively.