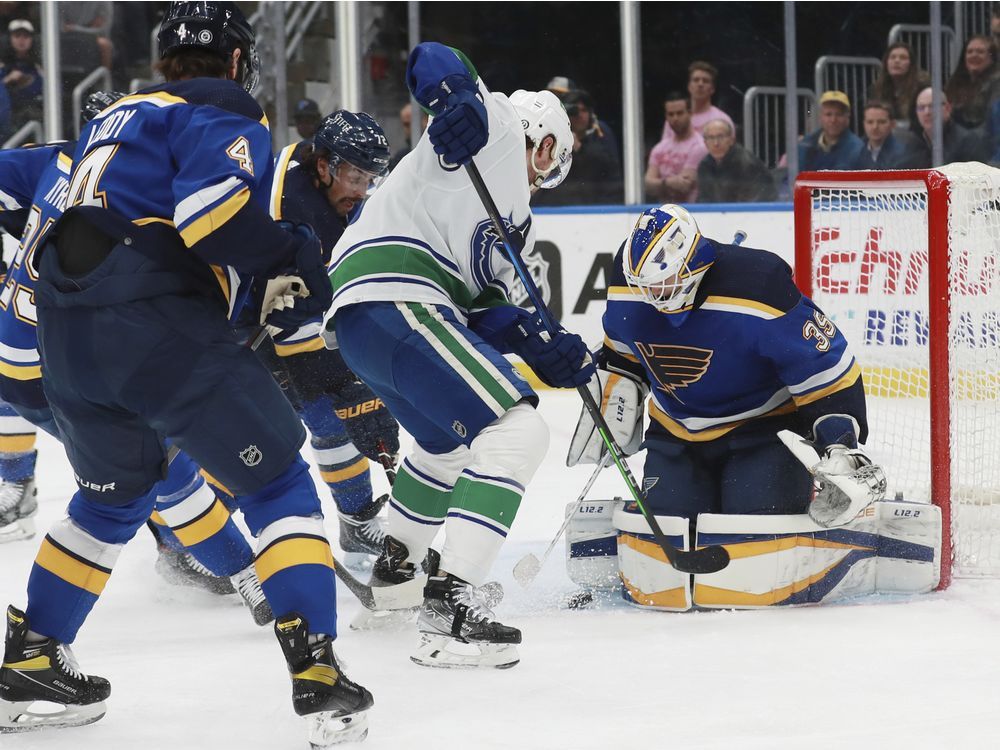 It’s ‘Game 2’ Wednesday night in this Canucks-Blues series, and Vancouver must play a less than gracious host by getting to the dirty areas around the St. Louis net and creating havoc

Can Canucks put on big-boy pants, get to net?

Two losses and just two goals against the Blues in the last two months are adding up to big trouble for the Canucks in pursuit of a playoff position. They made struggling stopper Ville Husso look like a Vezina Trophy candidate Monday in a 4-1 road loss by firing 36 shots — including 17 in the second period — mostly from the perimeter and hitting his crest. That can’t happen Wednesday. The Canucks butter their offensive bread at even strength by forechecking relentlessly, creating turnovers and scoring from the paint. That’s a tall order against the bruising Blues.

THREE THINGS ABOUT THE BLUES

• No doubting Thomas: Robert Thomas had a pair of assists Monday and the second-line centre has upped his helper count to 40, which is a career high. That’s significant. Only 37 players have hit that plateau this season, and among pivots Thomas is tied for 12th overall. Teammate Jordan Kyrou also has 40 assists.

• Leading by example: The Blues are 20-8-5 when scoring first and 17-1-3 when leading after the first period. They opened the scoring Monday, and after a 3-6-3 slide in which they gave up the first goal on nine occasions, finally found some early and needed mojo. “You feed off that,” said coach Craig Berube.