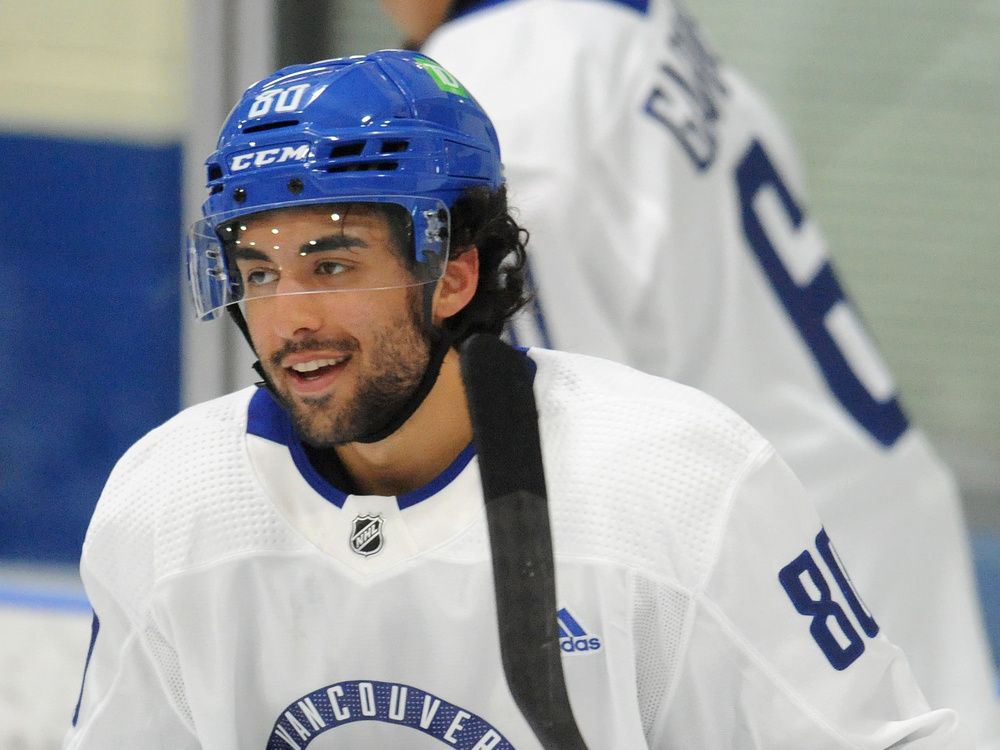 Pulling on a Vancouver Canucks jersey was a dream come true for one of the club’s newest prospects.

Skating on the same ice as Henrik and Daniel Sedin at the team’s development camp on Monday was something else entirely.

“That’s something I can’t even put into words,” Arshdeep Bains said of skating with the twins and former Canucks stars who now work in player development for Vancouver. “They’re my idols and having them on the ice telling me what to do, I’ll listen to anything they say.”

Bains, who’s from Surrey, grew up watching the Sedins play. He signed an entry-level deal with the Canucks last March at the end of a breakout season with the Red Deer Rebels of the Western Hockey League.

The 21-year-old left-winger led the WHL in scoring with 112 points (43 goals and 69 assists) in 68 regular-season games. He added four goals and six assists in 10 playoff appearances.

“I just want to go out there and just play my game,” the six-foot-one, 186-pound forward said of his season.

“Honestly, it’s not really about what I do on the scoresheet or stuff like that. It’s about what I do best and going out there and performing every night, I think. I tried to give myself the best chance to become a pro hockey player.”

Bains is one of 37 Canucks prospects skating at the team’s week-long development camp, where players took the ice for the first time on Monday.

He’s not the only one who idolizes the Sedins, however.

Elias Pettersson — a defenceman from Vasteras, Sweden, who Vancouver picked 80th overall in the NHL draft last week — is also a big fan of the twins.

“I always watched them as a kid. They have been the stars out in the world,” he said. “And now being here with them and having them as a coach, it’s awesome.”

There’s a large Swedish contingent at the Canucks’ camp.

Lekkerimaki turned heads at the 2022 Under-18 World Championship, leading Sweden to gold with 15 points (five goals, 10 assists) in six games. Pettersson also played for Sweden in the tournament.

Having friends on the ice has helped ease the transition to life in Canada, Lekkerimaki said.

“It’s been nice to have some Swedes and speak Swedish,” he said.

“It’s one of my favourite weeks of the year, just based off of getting these guys in. You see the whites of the eyes, you get to know them and make it very clear to them there’s a balance of education versus evaluation here,” Johnson said.

The camp is a chance for prospects to get a taste of the organization and for the club to see the up-and-coming talent compete, he said.

“We want to see them battle and hold each other accountable to the level each day,” he said. “They get better when they’re pushed.”

The prospects come into the camp highly motivated, including Bains, who’s looking to earn a spot on a roster this fall.

“I want to be the best player on the ice, obviously,” he said of his approach. “And I want to go out there and kind of showcase that I was the right choice and every night I’m trying to prove myself.

“So I’m trying to soak up as much as I can, learn from all the coaches, what they have to teach me. But at the end of the day, I have to go out there and work my butt off.”