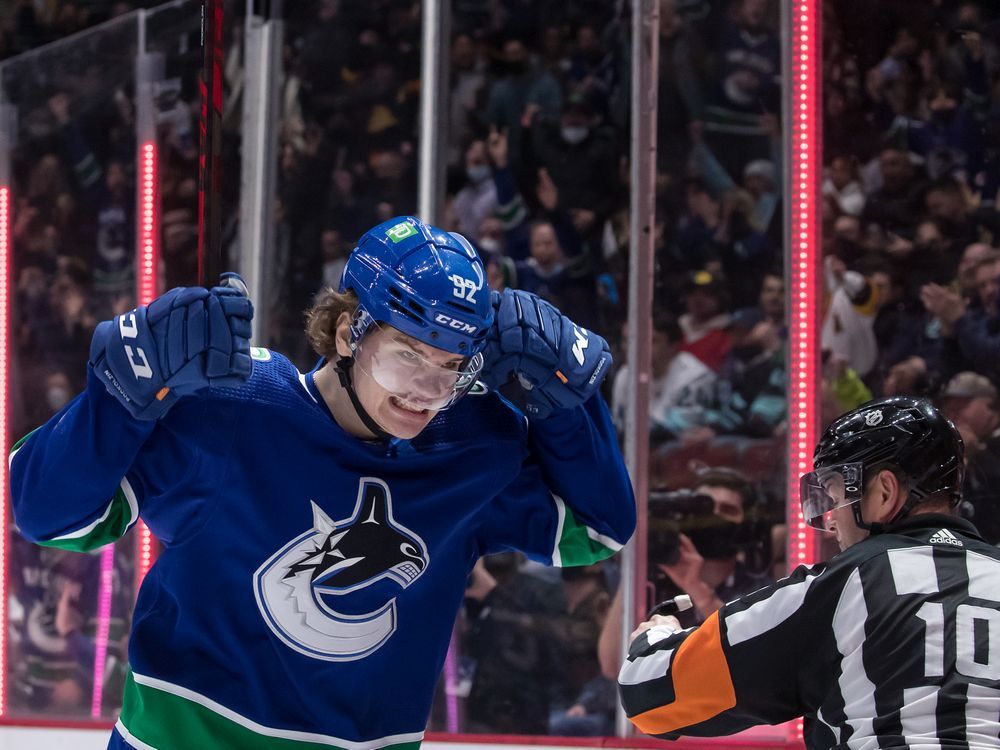 In a season that has seen many twists and turns, including a coaching and management change, a remarkable turnaround in team play and star turns from a number of top players, one quietly consistent item has been Vasily Podkolzin being first on the ice for practice.

“Because I’m a young player,” the Russian rookie told reporters on Thursday, his first time speaking publicly since training camp and his first time without a translator.

“Work some little thing. Like maybe some shots. That’s just good for me.”

Head coach Bruce Boudreau has had to chase the 20-year-old Podkolzin off the ice more than once, something the veteran coach has mentioned.

The work ethic Podkolzin has displayed all season will take him a long way, the coach said. A desire for hard work in a young power forward is something he’s seen before: When Boudreau took over as Washington Capitals bench boss early in the 2007-08 season, a 21-year-old Alex Ovechkin was on his way to a 65-goal campaign in his third NHL season.

“I remember when I meet with Ovechkin, he said to me that Bruce can help me in my career as a player and as a person, too,” Podkolzin said. “He’s a great coach. I’m happy to work with him and I hope we will work with him next season.”

The Ovechkin-Boudreau dynamic brought a smile to Podkolzin’s face.

“Bruce told me something like stories of Ovechkin, and that’s fun to see,” he said.

Podkolzin admitted he was struggling a little with his confidence in his early days in the NHL. He was a new player on a team that wasn’t doing very well.

“I didn’t know nothing,” he said. He was starting to find his confidence in the weeks before the early December firing of coach Travis Green.

“My first NHL coach, I just want to say thank you to him.”

Podkolzin seemed to mesh quickly with Boudreau, though. He has played in 77 of the Canucks’ 80 games heading into the club’s final two games of the 2021-22 campaign, scoring 14 goals and adding 12 assists for 26 points.

Boudreau, for his part, has raved about the work ethic of the 10th overall pick in the 2019 NHL Entry Draft, the Canucks’ most recent first rounder.

“I have to rein him in or he’d be out there on a game day skate for an hour, an hour plus. He just loves to play. He loves to learn,” Boudreau said of Podkolzin. “When he makes a mistake, he’s really hard on himself. He wants to be perfect. So you can see, if you fast forward this three years from now, you’re going to have a really good player that cares about the game and cares about how he plays.

The Moscow-born Podkolzin has massively improved his English. He had a English teacher in Russia, but speaking the language daily in his new home and workplace has made him feel even more comfortable expressing himself.

“I think I began to feel better like after the New Year,” he said. “I began to understand coaches, the guys, teammates, and that’s really fun when I can understand, that’s easiest for me.”

Arturs Silovs, on emergency recall from AHL Abbotsford because of injuries to goalies Thatcher Demko and Jaroslav Halák, is Latvian but also speaks Russian and helped Podkolzin understand a few questions, but Podkolzin gave all his answers in English.

Podkolzin has been the captain on teams in the past, and with his work ethic Boudreau can see why.

“I could see him, once his English gets better and his understanding gets better, (plus) he feels more comfortable about his own game, then I think I could see some leadership qualities coming out,” said Boudreau.

Asked what part of his game that he’s improved upon that he’s most proud of, Podkolzin pointed to how he’s got better at winning the puck back on the forecheck and in board battles.

“The old guys talk with me every day about it,” he said.

The cultural adjustment has been hard, of course. There are no other Russians on the team, he pointed out. But he and his wife Sasha, whom he married last summer, have been able to make some friends around town.

OVERTIME —  Boudreau didn’t rule out the possibility of starting Silovs on Friday in Edmonton. The 2019 sixth-round draft pick (156th overall) has split the season between AHL Abbotsford and Trois-Rivières of the ECHL. “We watched video on him when he was in Trois-Rivières. He played really good. I’ve had a lot of goalies that have played in the ‘Coast’ and it’s a great way to learn your craft and he’s a big goalie, practises hard, so I wouldn’t have any problems putting him in.”