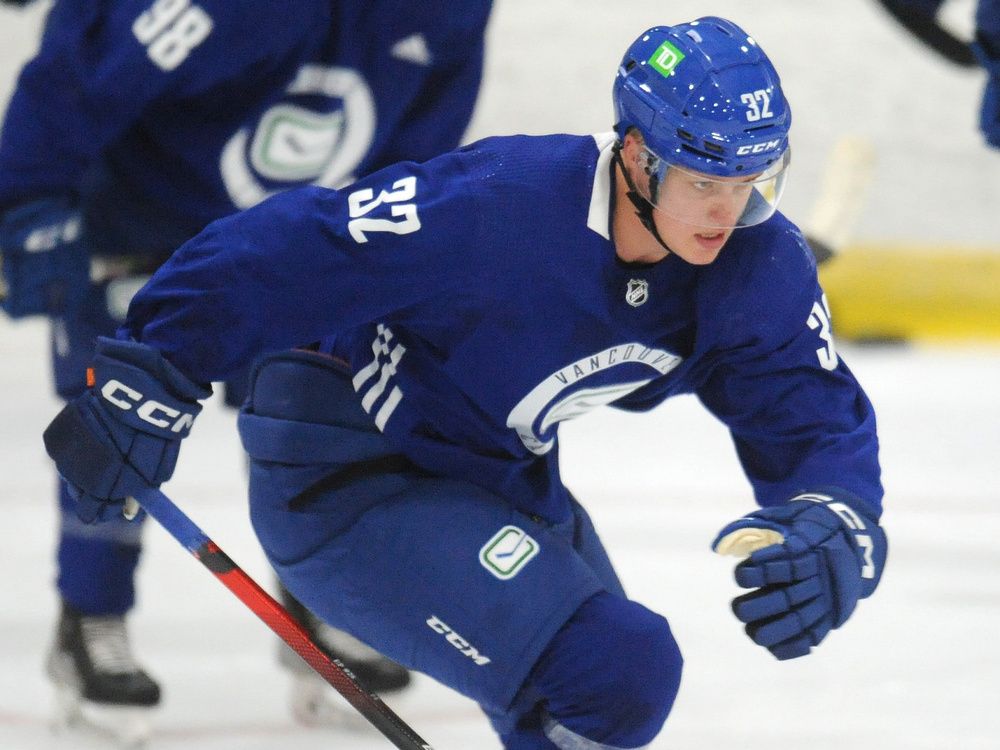 For the record, the new kid on the local hockey block said the preferred pronunciation of his name is ‘Uh-Lie-Us Pettersoon’.

For the future, the manner in which this other Elias Pettersson — a third-round draft choice Friday in the National Hockey League Draft — handled opening day of the Vancouver Canucks’ development, will make him more than a Twitter meme or the subject of comparison monikers to his more famous Swedish countryman.

They have yet to speak, but the Canucks’ star did post a congratulatory ‘Spider-Man versus Spider-Man’ duelling Twitter meme following the draft.

“I said thank you for the welcome,” the younger Pettersson chuckled Monday following the first day of camp at UBC. “It was fun.”

So, forget Pettersson 2.0 or Petey Light or what may pop up next on Twitter. What we saw on the ice was Pettersson right.

He excelled in technical drills to address proper stance and skating and then showed why the mobile 6-foot-2, 185 pounder was considered one of the best defenders in the 2022 draft class.

On a one-on-one drill, Pettersson could have taken the easy out as a forward raced into the offensive zone and cut into the high slot. Pettersson could have pivoted and reached out with his stick to help negate the play. However, he not only angled off the forward smartly, he physically erased the foray and then crashed heavily into the end boards.

Pettersson got up slowly and was wincing but didn’t miss a beat. And with the Canucks pining for prospects who can take care of their own end as a deterrent, the play was easily the best of the day. Especially in adapting to the smaller North American ice surface.

“Everything is fine,” Pettersson said of slamming the wall. “I just got a little hit on the knee. That was good training to get in new areas against new guys and it was fun.”

Fun? That’s quite the quick and satisfying summation because he moves well and hits hard.

“My skating is my biggest strength and so is my size,” added Pettersson. “If you’re going to make it to the NHL, you need to work on everything and this is a really good camp. I’m going to develop as much as I can.”

Pettersson looks up to towering countryman Victor Hedman of the Tampa Bay Lightning as a role model and a player he hopes to eventually emulate by playing well at both ends of the ice. Hedman is a two-time Stanley Cup champion (2020, 2021) and has won the Norris Trophy (2018) and Conn Smythe (2020).

“He such a good player — one of the best,” said the left-shot Pettersson. “I’m trying to be tough and play hard out there and that’s also one of my strengths, so I’m trying to use that. Last year, I was playing in the SHL (Swedish Hockey League) with big guys and my coach told me I need to be hard out there.

“I learned so much last year to be tough and stand up for myself. It will take some time, but of course, my goal is to play in the NHL. And I’m going to fight for that.”

None of this surprises Canucks senior director of player development Ryan Johnson.

“Those are things we’re addressing right out of the gate — his angling and we’ve got details to our week — and we’re not just out here running drills,” he stressed. “To see that on Day 1 and execute is something we’ve been showing on video and discussing. We’ll keep building on that.”

Pettersson split last season between Orebro HK U20 and its SHL entry. He had 18 points (10-8) in 37 U20 games and added 10 points (2-8) in six playoff games. He also logged 17 games with the organization’s SHL entry and had an assist in 17 games of limited ice time.

Pettersson will return to the SHL next season and is under contract through 2024-25, which is the option year. He also represented Sweden in the Under-18 world tournament this past spring.

Pettersson also got a good look Monday at two Hockey Hall of Fame inductees in Henrik and Daniel Sedin. Lending their on-ice expertise at this camp almost left Pettersson at a loss for words.

“They are icons in Sweden and all over the world,” Pettersson said. “I always watched them as a kid and they’ve always been stars. And now being here on the ice with them is awesome.”

Pettersson may get another look at the fitness-fanatic twins Friday. The camp concludes with a legendary vertical trek.

“I heard about it, but I don’t know exactly what it is and I’m not sure what we’re going to do — I think we’re going to walk up on the hill,” said Pettersson.

The demanding Grouse Grind in North Vancouver awaits and the Sedins have raced up the steep climb in an eye-popping 32 minutes. Will they lace them up Friday?

“My bet would be yes,” chuckled Johnson.

As for Monday, the on-ice grind got the better of 2022 third-round pick Jackson Dorrington. The USHL defenceman was absolutely gassed after several drills and often looked spent. A rough introduction to a gruelling week.

“It was a pretty high pace, especially for July,” said Dorrington. “But it was good. Everybody was pushing each other.”

OVERTIME — The Canucks have extended a qualifying offer to goalie Michael DiPietro but not to forwards Justin Bailey, Matthew Highmore and Juho Lammikko.