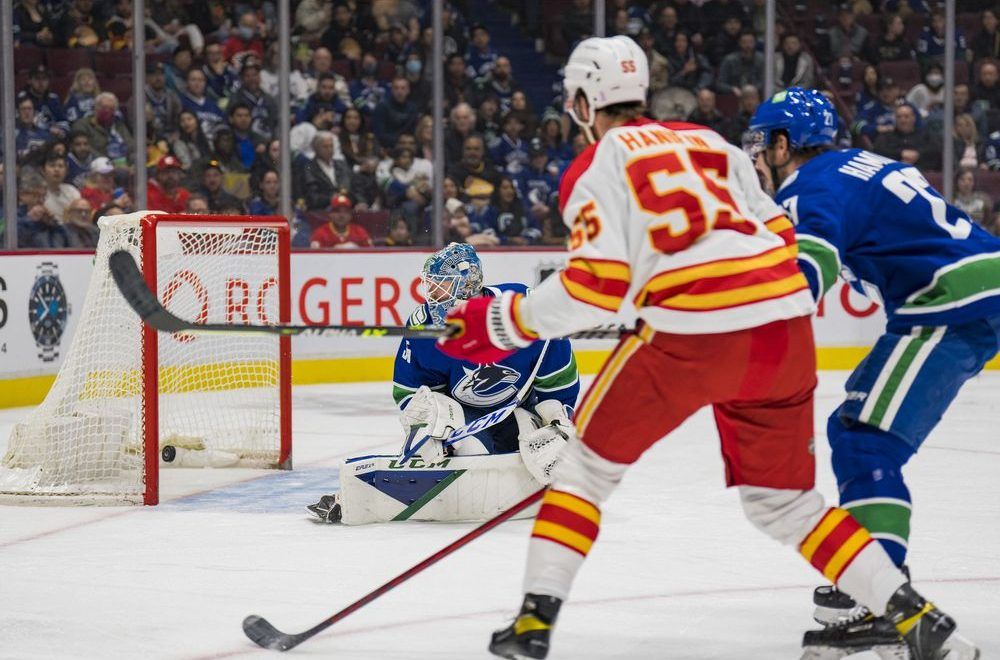 What are we even doing here?

All season the Vancouver Canucks’ players have talked about needing to start better.

The Canucks struggling out of the gate has ceased to be a surprise.

It was no different on Saturday night at Rogers Arena as the visiting Calgary Flames scored early and often in the first period on the way to a 5-2 win over the Canucks.

The Flames had played Friday in Calgary, losing 1-0 in overtime to the Buffalo Sabres but looked fresh coming out of the gates.

They scored twice in the opening 7:46 and outshot the home team 9-3. The Canucks ended the period on just four shots, all four coming from defencemen.

Canucks head coach Bruce Boudreau was steaming after Thursday’s 1-0 loss to the Detroit Red Wings, calling his team’s first period effort that night the worst of the season.

This period was surely worse.

“I can’t understand it. It’s not like it’s a surprise to them that another team that we had just beat 7-1 and who lost last night is going to come out, they’re going to be coming out flying and I told them in warm up again, I said they looked very serious,” Boudreau said after Saturday’s dispiriting loss.

“I’ve been doing this for a long time and you change things up in warm up, maybe you change the pregame ritual but I think quite frankly, in the end, it’s on the self, of getting ready for the game and understanding how hard you have to play and we didn’t play hard enough in the first period.”

He said he’s never coached a team that’s struggled as much as they have with their starts, especially after his team had been working so hard for so long.

“The last five games is the first time we’ve gone into a spin like this in 3.5 months since I’ve been here,” Boudreau said. “So trying to get a handle on it but at this time of year, it’s definitely not the way you want to play. We’ve been fighting for our lives for 3.5 months and now all of a sudden sort of make it easy for the opposition, whether it was Detroit, whether it’s whoever we’ve played, Washington, has come out in the first period and really taken it to us. I mean, that’s self readiness.”

The Canucks’ loss dropped their playoff chances, according to HockeyViz.com, to about 12 per cent, which seems high given the Canucks can only afford five  losses in their remaining 19 games.

Here’s what we learned…

To get no shots from your forwards in the opening period is shocking.

“I don’t know, what do you want to me to say? You know how I feel. I mean, without using a couple F-bombs out here …  it’s horrible,” Boudreau said. “At this time of year. This is stuff that just cannot happen.”

One of the early chances against saw the Flames blow into the zone and create a 2-0 against Thatcher Demko, who managed to anticipate the pass and shot and make a difficult save look effortless.

The Flames entered the Canucks’ zone with abandon most of the night, the home team doing very little to slow them up — no recipe for success.

Boudreau’s Canucks have done well defending the neutral zone, but they’ve had issues at times.

“We can’t handle the speed, first of all. Calgary came out and they were so much faster than us. And so when you can’t handle the speed it’s difficult to maintain, your gaps become really bad,” Boudreau said. “So instead of being aggressive in the neutral zone, you’re afraid that they’re going to beat you so you back way up. And then what happens is you don’t make contact till the top of the circles and then they’re already ready for a grade-A shot, which they had tons of in the first period.”

Noah Hanifin’s opening goal came on a rush but the shot was from the outside and you’d figure starting goalie Thatcher Demko would want it back.

He’s been so steady this year so giving up a goal from the outside is a sign of a goalie who is feeling tired.

And the Canucks have leaned on Demko a lot this season. Saturday was his eighth start in a row.

Every even-strength goal by the Flames came off a terrible defensive breakdown by the Canucks.

Matthew Tkachuk picked up the second goal, firing the puck home from dead in the slot.

Oliver Ekman-Larsson had been covering him, but lost his man and Tkachuk had time to fire home past Demko.

The third goal, scored by Rasmus Andersson, came seconds after the Flames broke up a 2-on-1 at the other end and then quickly counter-attacked.

Anderson rushed ahead and was the third Flame into the zone. He was left totally uncovered and fired a wrist shot over Demko’s shoulder

The fourth goal was another defensive miscue, this time by Ekman-Larsson’s partner Tyler Myers, who coughed up the puck under pressure from Milan Lucic in the neutral zone.

Tyler Toffoli pounced on the loose puck and fed it to Elias Lindholm, who took a quick shot and beat Demko.

The goal was even more painful because the Canucks had opened the period on a hot run of possession, at one point trapping the Flames in their own end for nearly four minutes straight.

With the game looking out of reach, Jaro Halák came into goal in the third period, making his first appearance since a disastrous start in New Jersey Feb. 28.

The veteran netminder didn’t look pleased that he got called upon when Boudreau told him at the end of the second period that he’d be playing in the third as a television camera caught the exchange on the Canucks’ bench.

Boudreau didn’t have a comment about the exchange post-game.

He said he hadn’t made a decision about who was going to start Sunday against the Buffalo Sabres, but that he made the change to give Demko a break from the lack of protection his teammates were affording him.

“I wanted to save Demmer,” Boudreau said. “The poor bugger’s in there and facing breakaway after breakaways and he didn’t deserve it. He doesn’t deserve that. He’s been too good for us.”

It was expected that the Canucks would start Demko in both games this weekend, such was the importance of the games for their faint playoff hopes.

So bringing in Halák made some sense, giving Demko a chance to start resting early ahead of Sunday’s home game versus the Buffalo Sabres.

Halák gave up the game’s fifth goal, failing to catch a shot from his right side by Johnny Gaudreau on a third-period power play.

It was not a good night for the Canucks’ checking line of Tyler Motte, Juho Lammikko and Matthew Highmore.

They were badly outshot when they were on the ice, though only the fourth goal happened with any of them on the ice: Highmore and Motte.

They did managed to get the Canucks’ one tally of the game, Highmore tipping a high shot past Flames goalie Dan Vladar.

Vladar didn’t have to work too hard on the night but will be happy with how the game went beyond just the win, as he came in on relief for Jacob Markström in the Flames’ last visit to Vancouver, a 7-1 win for the Canucks on Feb. 24.

In that game, Markström was forced from the Calgary net late in the second period because of a broken skate blade. Vladar had to go into the net cold in the midst of a five-goal outburst by the Canucks.

That game was night and day compared to Saturday.

The Canucks were handed a power play early in the second period.

Down 4-0 it prompted a question: would it be worth it to just pull the goalie and create a 6-4?

The logic of such a move seems sound, as getting the game to 4-1 is obviously very important, and given how good NHL teams are defending leads, trailing 4-0 or 5-0 wouldn’t seem to matter much.

The Canucks didn’t pull their goalie in this case and they didn’t score.

They did score on a third-period power play, Brock Boeser tallying his 18th of the season.

One other pull-the-goalie question: If you’re on a 5-on-3, should you always pull the goalie and make it a 6-on-3? What are the chances the other team ever even wins the puck back, let alone gets a chance to shoot the puck on the empty net?