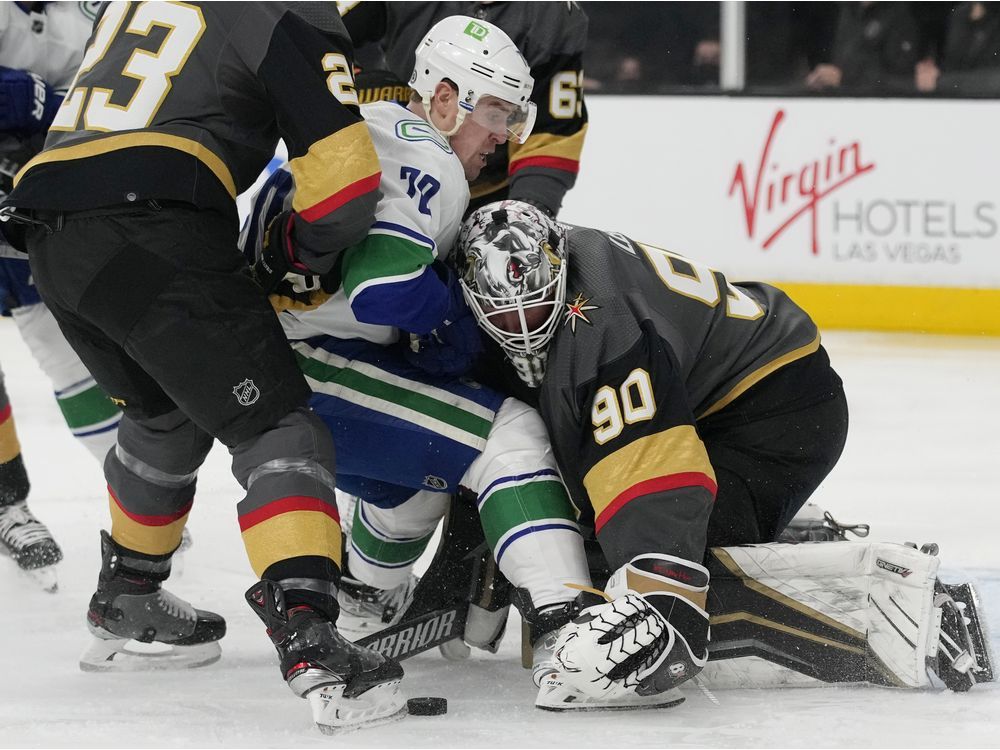 It had become a bridge too far.

An inability to break smartly from the gate and cross over to the second period without falling into a goal hole has always threatened to keep the Vancouver Canucks from a playoff position.

With a league low 43 opening-period goals — and without a regulation time, regular-season victory in their history of meetings with the Vegas Golden Knights — the Canucks were already hurting before they hit Sin City on Wednesday.

Add the absence of Quinn Hughes to a stomach bug, and Brock Boeser to an arm injury that was still being evaluated, and the Canucks could have had better odds at the casino instead of T-Mobile Arena. Especially with three losses in their last 10 games and the Golden Knights having had a 10-0-2 run of domination against Vancouver.

However, the Canucks were resilient and rallied from a 1-0 deficit in the first period with goals by Bo Horvat and Brad Richardson in a span of 17 seconds en route to an impressive 5-1 victory that featured the fourth four-point night of Elias Pettersson’s career and a 33-save performance by Thatcher Demko.

“For the time of year and what we needed, it was a pretty good all-round game,” said Canucks coach Bruce Boudreau. “The goalie had to be great, but the players in front of him were pretty good, too. We started on time and when they play 60 minutes, it’s a tough team to beat because we’re usually pretty good when we play with the lead.

“It could have been Pettersson’s best game, he was all around the puck and made real intelligent plays. He knows where to go and playing on the right, he sees the ice so well that when he turns he’s got everything on his forehand. If you look at history, guys like (Alex) Ovechkin who have played their off-wing have been very good and Pettersson has that same kind of vision.”

A full performance pull, including two power-play goals and another perfect night for the vastly improved penalty kill, helped cut the deficit to the final wild-card playoff spot to seven points. Missing key players also helped the Canucks get back to basics and play more simple and direct.

“If anything, it made them more in tune that they had to play their best game because we were missing two top players,” added Boudreau. “The senses are heightened and they just played a better game and followed the game plan.”

Of course, it won’t mean much if the Canucks don’t follow up with a win Thursday in Glendale, Ariz. It’s why Boudreau said he had a goalie decision to make because of the importance of staying within playoff striking range. Normally, Jaroslav Halak would get the start in the second half of back-to-backs.

“Our sense of urgency can’t have a letdown and we come down to earth, we’ve got to play the same way,” he warned.

Here’s what we learned as Tanner Pearson also scored for the Canucks scored while Jack Eichel replied for the Golden Knights:

The left-shot Pettersson looked comfortable at right wing where he played in the Swedish Hockey League and knew he would get good looks with J.T. Miller. Two goals and two assists emphasized that point.

After drawing a pair of assists, the slick Swede showed off his improving scoring touch by using smarts and speed to provide the Canucks with a 4-1 lead. He sped past Jack Eichel behind the Golden Knights net and worked his way into position to redirect an Oliver Ekman-Larsson pass from the point.

The four unanswered goals helped overcome Eichel’s early marker. He was robbed by Demko on his first attempt and there was a second save before the puck popped out to Eichel for his fifth goal in six games.

Demko then stood his ground with the Canucks up 2-1 by denying Jonathan Marchessault from the slot, but Pettersson wasn’t done.

On a third-period power play, he deftly knocked down a short-handed clearing attempt by Alec Martinez and the puck bounced to Alex Chiasson, who spun and fed an open Pettersson, who now has six goals in his last five games.

Demko then stopped Shea Theodore and Mattias Janmark twice in the third period with the Golden Knights trying to close a four-goal deficit. He then denied Chandler Stephenson on a 5-on-3 advantage.

“I’m really happy with the way we played,” said Pettersson. “Today, was a really good game from us for 60 minutes and that’s what we need to bring every game. It’s easy to say I was (feeling it) tonight but my teammates were setting me up. We had to play within our standards and we’re aware of the situation that we’re in and basically have to win every game.

“We had to make sure we got pucks deep. Last game, we had too many turnovers in the neutral zone and that feeds into the game they want to play. Our skating and forecheck were big and we defended well.”

Said defenceman Tyler Myers: “I thought it was Petey’s best game of the year. He has played a lot of good hockey the last couple of months but the way he was engaged — and never mind the points — he’s a special player and he played special tonight. We get him to play like that more often and he’s going to be a great player for us for a long time.”

Bo Horvat has endured an energy-zapping COVID-19 diagnosis, a stomach bug and plenty of scrutiny this season.

It comes with the territory when you’re captain of the Canucks and critics expect you to wear a cape along with the ‘C’. It hasn’t been easy and the centre has been harder on himself than anybody with a Twitter account.

Getting over the virus in January took longer than expected and just three points in eight games after a U.S. quarantine weighed on Horvat. Getting over vomiting last week was no picnic. But he has six goals in his last eight games and 14 in his last 20 and the boo-birds have gone silent.

Horvat got the Canucks going Wednesday on the power play with his career-high 28th goal to erase a 1-0 first-period deficit.

After he shot wide from the bumper spot in the slot, he got to the net to provide a screen on an Ekman-Larsson point shot. He established position to bang home the rebound. In the second period, he was sent in by Vasily Podkolzin and had his shot go off Robin Lehner’s arm.

“Guys really stepped up tonight,” said Myers. “It was one of our better team games in a while. We’re at our best when we play above the puck, and when we don’t, we’re pretty average out there. When we do, we’re tough to play against and we have to do it more consistently.”

Richardson admitted he wasn’t feeling quite right Wednesday after missing a game with that stomach bug that circulated around the club.

“A rough couple of days and the stomach still isn’t back where I’d like it and it’s getting better,” he said before puck drop. “Not ideal timing when you’re fighting for your lives, but we’ve got to suck it up and find a way.”

Richardson found a way to give the Canucks the lead after Horvat’s effort. He worked his way into the slot and pounced on a loose puck for his first goal in six games since being claimed off waivers from Calgary, where he had two goals in 27 outings.

Earlier in the opening period, Richardson set up Conor Garland and the hard-luck winger, who now hasn’t scored in 18 games, clanged one off the post.

“He has balanced out our lineup very nicely and we knew what kind of player he was when he came in,” Myers said of Richardson. “Especially for defencemen. We like playing with guys like him because he’s always in the right spot and talks to you all over the ice. He makes your life a little bit easier out there.”

IT MUST BUG HUGHES

It’s enough to make you sick.

The irony of a stomach bug possibly quashing Hughes’ quest to eclipse a long-standing, single-season team record is not lost on anybody charting the pursuit.

The durable and dutiful defenceman has already passed the 50-point plateau for the second time in his three-year career with 53 points in 66 games. He had also been on pace to eclipse Doug Lidster’s elusive excellence of 63 points (12-51) in the 1986-87 season that set the performance bar for blueliners.

However, an illness sidelined Hughes on Wednesday and likely Thursday, which means he’s running out of minutes to make history. If Hughes plays Saturday against San Jose, he’ll have 10 games to amass 11 points to surpass Lidster. It’s doable. Hughes also has 48 assists, which is eight shy of surpassing Dennis Kearns’ single-season record set in 1976-77.

Before being blanked in his last three outings, Hughes had a dozen points (1-11) in 12 games. And in a stretch of 10 games between Nov. 29 and Dec. 29, he collected 12 assists, including a career-high four against in Ottawa on Dec. 1. But points haven’t been the point this season. Hughes wanted to also kill penalties and improve a poor plus-minus rating that now stands at a pleasing plus-8.

“I usually have goals and I want to be up there with the best defencemen, but with how last year went (minus-24), I was motivated and focused on trying to have a good overall game,” Hughes told Postmedia last month. “I was just taking it 10 games at a time and never really looked at a number — I just played and that’s just how the year has been.”