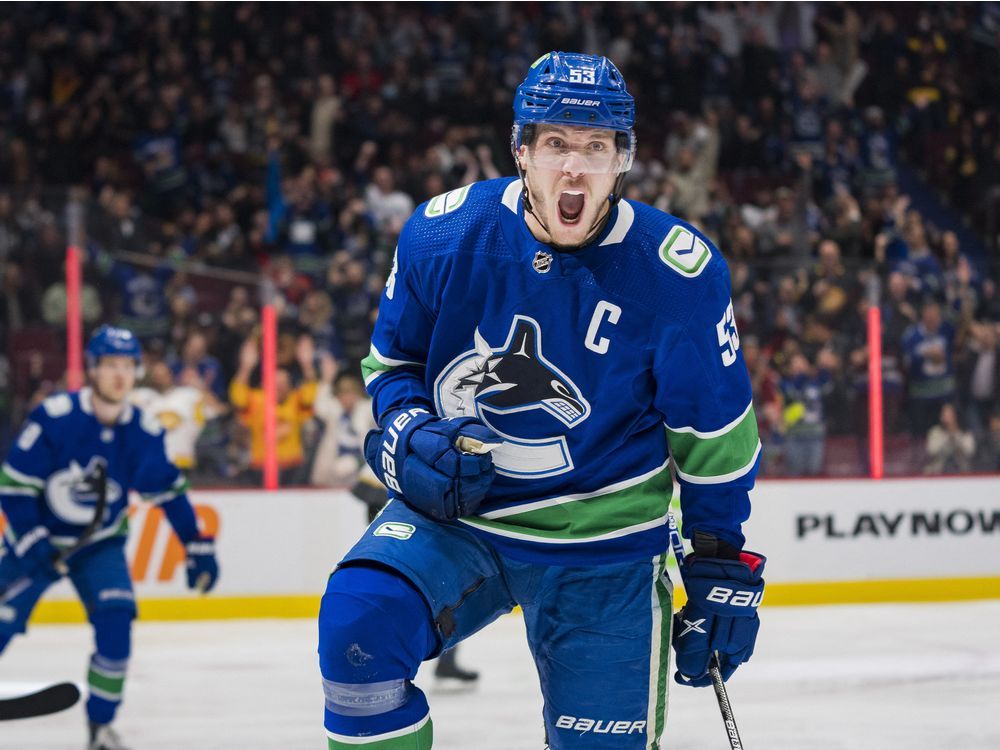 Bruce Boudreau searched for the right reference to reflect the magnitude of the moment Tuesday.

The Vancouver Canucks coach knew a matchup with major playoff-chase implications — the latest and greatest must-win game — called for something special; something to acknowledge what his club would face in the healthy and roster wealthy Vegas Golden Knights.

“Herb Brooks said if you play them 10 in a row, they might win nine, but they might not necessarily win them all,” said Boudreau. “It’s very capable that if we play our best, good things can happen.”

We assume he was talking about the ‘Miracle on Ice’ stunner during the medal round of the 1980 Winter Olympics at Lake Placid, N.Y. The U.S. defeated the dominant defending gold medallist Soviet Union 4-3.

“There isn’t an athlete in the world who doesn’t want to be the underdog,” Boudreau continued. “I tell the guys the best feeling in the world is doing something others don’t think you can. We’re playing a great team, and if we can beat this team, we can beat anybody is what I tell them.”

The message was received in the best possible way. Without injured top-six forwards Brock Boeser and Tanner Pearson, they found a way once again to get it done in a wild 5-4 overtime decision.

The Canucks scored early, and after Shea Theodore got the visitors within a goal early in the third period, they couldn’t hang on as Theodore struck again with 41.4 second remaining in regulation. However, in the extra session, it was Quinn Hughes pouncing on a rebound off a Conor Garland shot just 51 seconds into overtime to seal the deal with the puck at his feet.

“I was just surprised,” said Hughes, who had gone five games without a point. “At first, I saw Bo coming down the middle and I was going to drop it (puck) and then I just kept on going. It happened so quickly. It’s a big goal and hopefully more to come.

“There has been no quit in the group the whole year and the only thing I was nervous about is our overtimes haven’t been great recently. That was the only thing I was thinking — to have a good shift. We have eight games left and we’re excited because we wanted to be in it (playoff chase) and it’s hard with the way we started (the season).

“But with Demmer (Demko) playing the way he is, and other guys stepping up, it’s been huge and it (playoffs) feels like something we could do and we have a lot of games we have to win. But belief is the word we keep saying.”

Hughes sounded hoarse, and in missing two games last week with a bug that circulated through the club, he also had to deal with a fever.

“I feel fine, it’s just whatever is going on with my throat I couldn’t tell you,” he added. “Before I got sick, it was the best I felt in my career stamina-wise. I’m gearing myself back up.”

It was also the Canucks’ fourth-straight win and Thatcher Demko finished with 41 saves. It put the Canucks within three points of the Golden Knights and still six back of the Dallas Stars, who hold down the final wild-card spot.

“It was a great lesson to be learned, quite frankly,” Boudreau said post game. “Our second period was great but our third period, when you’re playing a good team you can’t sit back. Usually, that lesson costs you and it didn’t tonight. We found a way in overtime and it just goes to show you how important that first face-off is.

“Getting control of the puck and I was thinking let’s just keep it for five minutes and take our luck in the shootout. But I was happy to see Hughes score. He needs to do that. He needs to jump up into the play. He’s great passer, but that would make his game even better.”

PETTERSSON IS A HIT

When the centre-turned-winger landed two heavy offensive-zone hits along the end boards early in first period — and then hustled back to break up a couple of scoring chances — it was a sign of how dialed in he was to make a difference with and without the puck.

Early in the second period, Horvat was denied from the slot before Pettersson wired a shot off the post and Podkolzin was present to bang home the rebound.

“He was really good,” said Boudreau. “His confidence and him and Chiasson as big bodies are really working the boards. Pods could have had a couple of more (goals).”

Pettersson was then credited with his 26th goal on a shot that went off Zach Whitecloud’s skate, crossed up Lehner, and appeared to sneak across the goal line. A video view confirmed the goal to make it 3-1.

On a 2-on-1 break with Richardson, he gave Lehner a look like he might shoot to freeze the stopper and slipped a cross-ice feed for a 4-2 lead after Amadio had cut the deficit to 3-2. Setting up the Richardson tally was made possible because Pettersson was good again defensively in breaking up a play at his blueline.

“They had a 4-on-3 and I heard their bench screaming and I knew I had a guy behind me and kind of guessed he would pass and just read the play,” said Pettersson. “It bounced off my helmet and I had the 2-on-1 with Richardson.”

Said Boudreau: “He anticipates so well and proving he’s stronger than he looks with the hits. It’s a great time for good players to be great.”

It was more than just the three points that upped Pettersson’s output to 16 points (8-8) in the last 10 games. And in the dying minutes, he was denied again on the doorstep.

“We wanted that third period back, but we found a way to win,” said Pettersson. “It’s maybe my best hockey now but I’m just trying to play my best every shift, create and play hard. And lately, I’ve been scoring points and that comes from hard work from me and my teammates.”

It also comes from being engaged and willing to hit, take a hit and break up plays.

“It’s what we talk about in the room,” he said. “Coming out fast and play the body. I’m not the heaviest hitter, but I’m trying to do the best that I can do.”

HORVAT ON A HIGH

The Canucks captain was asked earlier this week if we’re seeing the best version of the centre, who’s on a points streak with 11 (9-2) in his last 11 games, including a career-high 31 goals.

Of course, Horvat did the expected. He didn’t want to put a ceiling on his capability to lead by example on the ice and be a voice of reason in the room. The drive showed in the opening two minutes when he opened scoring from what has become his power play sweet spot.

He manoeuvred into the bumper position, took an Alex Chiasson feed from beside the net, and snapped a quick wrist shot past Lehner.

Big games often bring big drama — both on and off the ice — and the Golden Knights didn’t disappoint.

Their pre-game salary cap acrobatics to remove captain Mark Stone from long-term injury reserve in his return from a Feb. 8 back injury rivalled the Cirque du Soleil show across from Rogers Arena.

After all, the Golden Knights now have a record seven players on LTIR to be cap compliant. They challenged the Canucks with a third line that had Chandler Stephenson between the recently-returned Max Pacioretty and Stone. That’s depth.

“We’re right where we want to be,” Golden Knights coach Pete DeBoer said following the morning skate. “We’re getting bodies back and we’re in a good spot. In 14 years in the league, I haven’t dealt with this many injuries for this long to that many key people, A credit to our group and our depth. We still have a pulse.