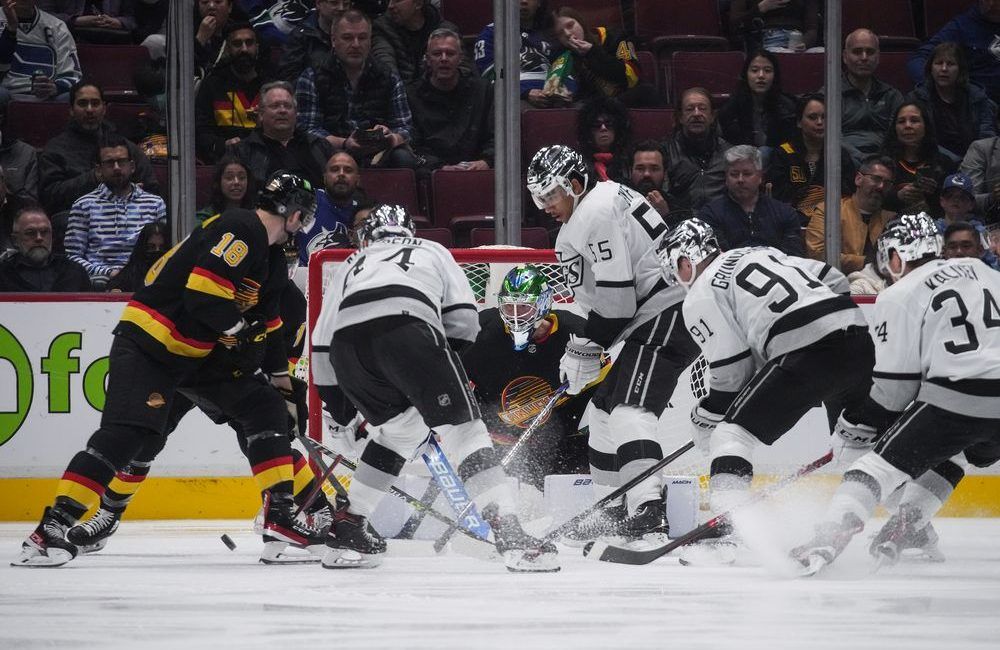 The challenge for the Vancouver Canucks’ leading scorer and moral compass was to avoid being a mentally exhausted no-show in a meaningless regular-season home finale and lead his club in the wrong direction.

However, Miller was like his teammates and often had difficulty sustaining pressure before the Canucks  finally forced overtime where the visitors struck two posts before Brock Boeser scored his second goal of the night on his third crack at the puck in a 3-2 victory over the Los Angeles Kings.

“We’ve battled so hard all year and for us to play a team that’s in the playoffs, we take a lot of pride in that and it still meant a lot to a lot of us to show what our team is capable of,” said Boeser. “It’s pretty amazing where we are compared to the beginning the year.

As for his winner, Boeser wasn’t sure how the play developed but knew he had to get to the net.

“I don’t really know what happened. I got the puck in the corner and didn’t really know where everyone went,” said Boeser, who finished with five shots and nine attempts. “Petey was screening and I tried shooting and Petey got it back and looked for me backdoor and it took me a few tries and I finally put it home.”

Boeser missed five games earlier this month with a hyperextended right elbow and was also sidelined by COVID-19 this season to keep the restricted free agent from chasing 30 goals. He has four goals in his last six games.

“I wanted to finish the year strong and we’ve been showing what we can do the last 50 games.”

The Canucks had dug a two-goal hole and often appeared listless before finding some third-period life. They were being outshot 24-8 at one point of the second period, but did cut it to 27-15 with the odd offensive-zone flurry.

Boeser then scored on a third-period power play to cut the deficit and Miller drew an assist to climb to 98 points. Alex Chiasson then got a great Quinn Hughes pass, got to the net, got to a rebound to draw the club even on a night when it looked like that wouldn’t be possible.

Vasily Podkolzin hit the post late in the third period to set the stage for some unexpected drama and a satisfying victory.

“I told them I was so proud of them,” said Boudreau. “It would have been easy for the last two games to just fold the tent after fighting so hard for so long to get to where you want to be and you don’t get there. It’s like the air out of a balloon.

“These guys keep fighting. I haven’t seen any quit in them.”

It wasn’t surprising that the start was slow before the resolve kicked in.

The club had gone so hard for so long in an incredible 31-15-5 run under Boudreau before being mathematically eliminated from the post-season that they were often running on fumes in a failed pursuit of a wild-card position.

On Thursday, it looked like there was simply nothing left in the tank — mentally or physically — no matter how hard the coach tried to pump them up before puck drop, or how hard Miller kept battling for pucks along the walls.

“I wasn’t trying to get him 100 points, I was just playing my best player a lot,” Boudreau said of Miller logging 24:10 and contributing to a perfect penalty kill night. “We’d love to see him get it (100 points) and hopefully he does, but whether or not, it’s not going to take away from the great year he had.”

A first-period bench minor for too many men on the ice was a sign of not being sharp because short shifts and quick line changes are a staple for the way Boudreau wants his bunch to play. And maybe that’s why he had a lot to say before the game.

“There’s always something to play for,” he insisted. “We want to catch Vegas. We want 40 wins. We want go 6-0-2 in the last eight home games. It’s a great indicator to a coach when the games don’t theoretically mean anything in the standings, to see what kind of effort you get.

“That goes to character. So, we’ll be seeing a lot of that.”

Well, we didn’t see enough until the third period when the Canucks refused to quit.

Miller entered the night 10th overall in National Hockey League scoring and is now two points shy of the 100-point plateau — Henrik Sedin was the last franchise player to hit the century mark in 2010-11 with 104 points — and there was a standard he wanted to uphold to keep creating the culture.

He put a shot over the crossbar in one foray to the net but kept battling along the walls and in the circle. He finished with three shots and eight attempts and won 65 per cent of his draws.

If anything, the final result was another reminder of what it’s not like to be playing in May.

For Miller, it has always been about making the playoffs because he knows how hard it is to get there and how bitter the taste of post-season defeat can be. It can linger for years.

Here’s what we learned as the Canucks ended their home-ice schedule:

THEY SHOOT, THEY SCORE

The were getting their chances but couldn’t find the net.

There was a third-period power play in which Miller double-clutched and couldn’t get a shot away and Elias Pettersson shooting wide. And with a 5-on-3 advantage for 39 seconds, Boeser shot wide from a sharp angle and another Pettersson effort was blocked.

Boeser finally connected from the high slot with a quick release for his 22nd goal of the season.

Sheldon Dries drove to the net early, lost an edge and then hit the post and it wasn’t looking good. Boeser was then foiled on a 2-on-1 break when fed a perfect cross-ice pass by Pettersson.

“We got the result we wanted, but the first two periods were made a little off from our side,” said Pettersson, who had two assists, three shots and eight attempts. “In the third, we played the way we wanted and got ourselves a win.”

Spencer Martin had to have a laser focus Thursday because this wasn’t an easy game to play.

On a personal level, there was the opportunity to prove that he’s more than capable of backing up the injured Thatcher Demko next season.

When Tyler Myers took a four-minute, high-sticking minor in the second period, he made a pad save off Sean Durzi and then foiled Alex Iaffalo from the slot. Martin denied Iaffalo again from the slot before Gabriel Vilardi open scoring with a short-side shot in which Martin was screened by defenceman Travis Dermott.

However, late in the second period, Adrian Kempe was allowed to skate untouched through the neutral zone and get into the high slot before picking the short side.

But Martin made a great overtime save and would bend but not break in another litmus test.

“He has earned it (contract),” said Boudreau. “I keep waiting for it (effort) to fall off and it would have been easy after playing so well in three games (January) to come up and have a little down time. He has taken off from where he left off and that really bodes well for the future.”

OVERTIME —  In fan balloting for team awards, Luke Schenn was named unsung hero, Quinn Hughes top defenceman, Miller most exciting player and Demko the MVP.  Rookie winger Will Lockwood, who is eligible for the AHL post-season, was injured in practice Monday and appeared to re-aggravate an old injury. “Everything is fine as far as structure,” said Boudreau.