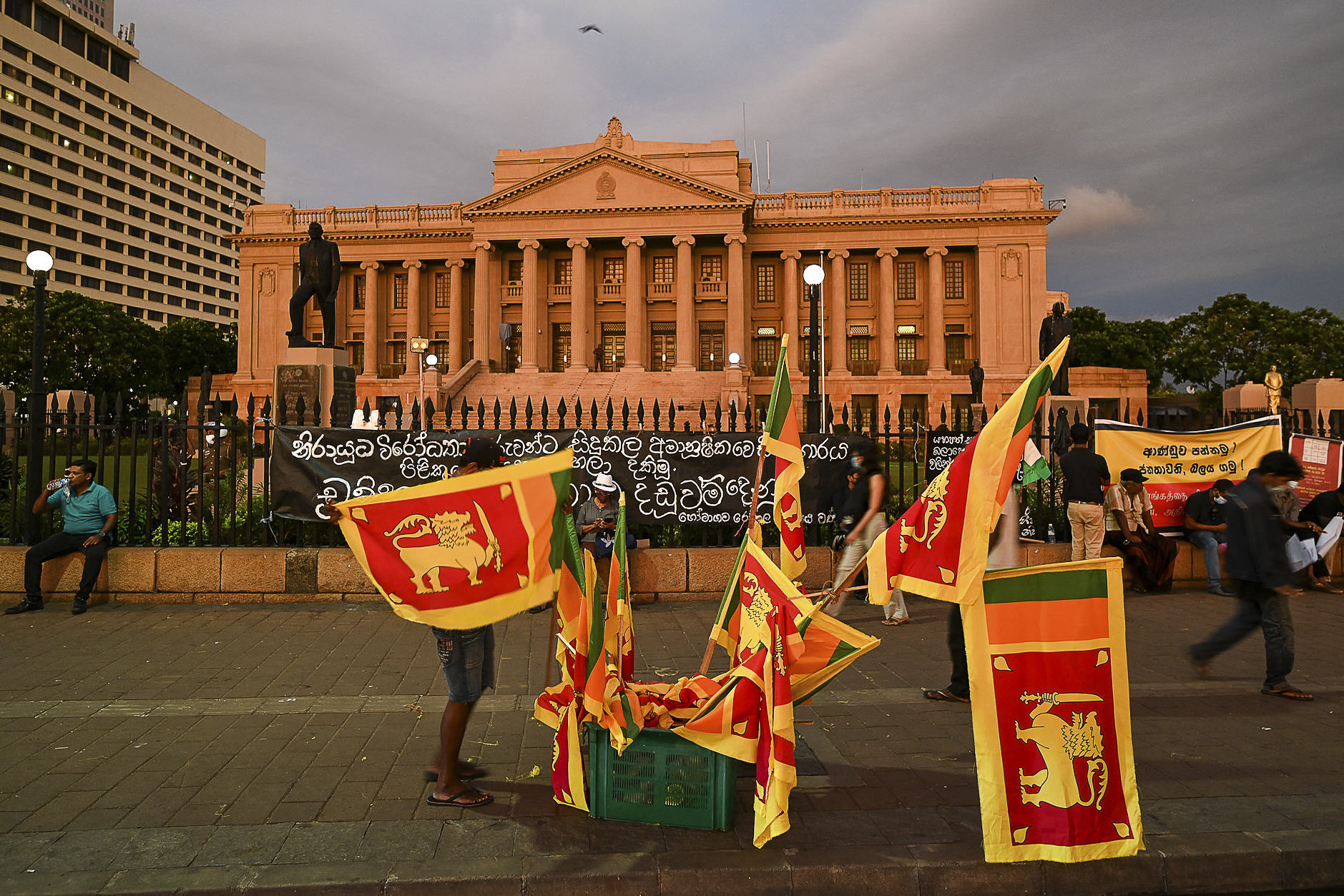 A vendor selling flags of Sri Lanka waits for customers during an ongoing anti-government demonstration near the president’s office in Colombo on April 26, 2022, demanding President Gotabaya Rajapaksas resignation over the country’s crippling economic crisis. — AFP photo

COLOMBO (April 28): Cash-strapped Sri Lanka announced on Tuesday it would sell long-term visas to attract desperately needed foreign currency after the island nation ran out of dollars to pay even for food and fuel.

Foreigners who deposit a minimum of US$100,000 locally will be granted permission to live and work in Sri Lanka for 10 years under the “Golden Paradise Visa Program”, the government said.

But any income from the scheme is likely to be dwarfed by the scale of the current crisis, with acute shortages of food, fuel and medicines that have triggered widespread protests.

Trading at the Colombo Stock Exchange was halted three times Tuesday as prices plunged, with the blue-chip S&P index closing down 9.75 per cent.

That came on top of a near-13 per cent drop on Monday, the first day of trading since a two-week break during which the government hiked interest rates and defaulted on its US$51 billion foreign debt.

Equities have shed 47 per cent of their value since January, with the local currency falling by about 40 per cent against the greenback in the past month.

Fuel prices have almost doubled since December and the government on Tuesday announced an 81 per cent increase in the price of cooking gas.

Cement, soap and detergents went up on Monday by between 17 and 100 per cent.

The latest price increases came as the main opposition launched a six-day protest march from the central city of Kandy to the capital, a distance of 115km.

Under the programme, the money payable will need to be deposited in a local bank account for the duration of the visa, the government said in a statement.

“This scheme will help Sri Lanka at a time when we are facing the worst financial crisis since our independence,” media minister Nalaka Godahewa told reporters in Colombo.

The government also approved the granting of five-year visas to any foreigner spending a minimum of US$75,000 to buy an apartment on the island.

With the crisis worsening, the government also said it was ready to consider political reforms, including constitutional amendments that could reduce the authority of the president.

Gotabaya Rajapaksa gave himself sweeping powers to appoint and sack ministers, judges and public servants after his 2019 election.

His government also rolled back democratic reforms that had given statutory independence to the police, civil service, election commission and the judiciary.

Sri Lanka’s economic collapse began to be felt after the coronavirus pandemic torpedoed vital revenue from tourism and remittances.

Utilities unable to pay for fuel imports have imposed lengthy daily blackouts to ration power, while long lines snake around service stations as people queue for petrol and kerosene.

Hospitals are short of vital medicines, the government has appealed to citizens abroad for donations and record inflation has added to everyday hardships.