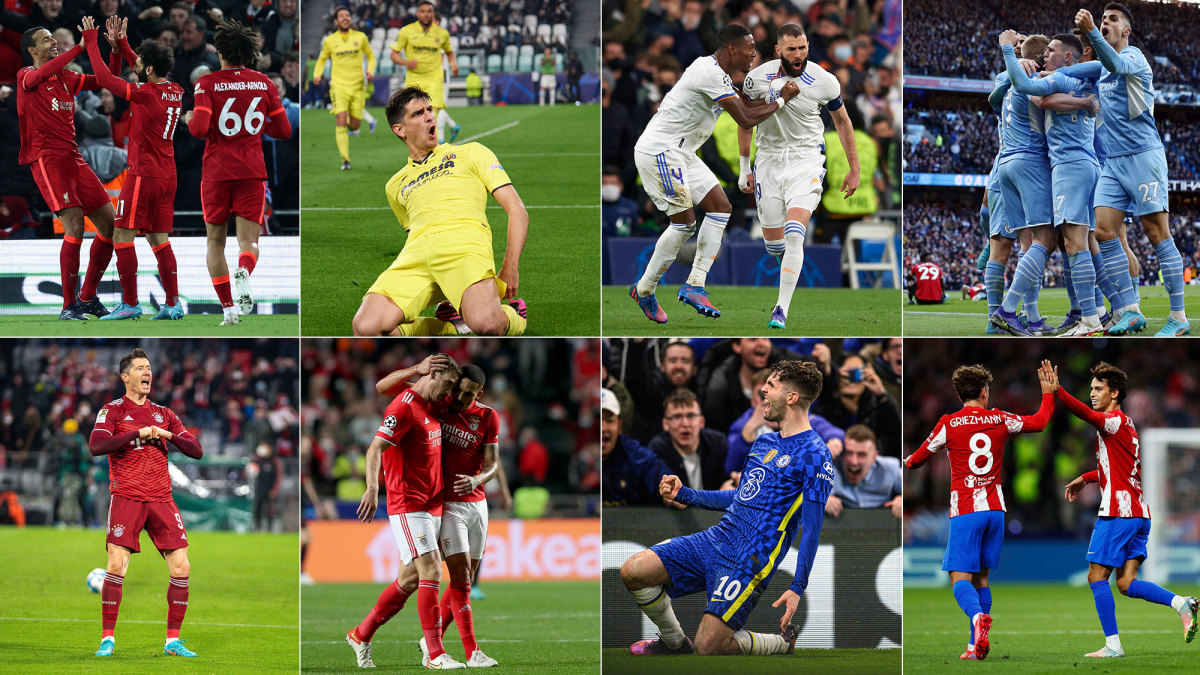 For once, the UEFA Champions League draw seemed to deliver a balanced quarterfinals that still has the potential for fireworks.

After all, the two best remaining teams from the group stage who went undefeated (Liverpool and Bayern Munich) ended up with what most would call the easiest draw for the upcoming round. Yet they could both be caught looking ahead at the other in a mouthwatering semifinal that is sure to entertain.

Meanwhile, both of last year’s finalists, Manchester City and Chelsea, face more difficult matchups with the giants of Madrid, who might both like their chances of advancing beyond their English foes after overcoming tough round-of-16 matchups.

So how do the remaining eight clubs stack up? We’ve ranked the quarterfinal field, with an eye on which teams have the clearest path to lifting the trophy in Paris on May 28:

While it’s difficult to determine which team has the clearest advantage from the Champions League quarterfinals on, what is certain is one part of the bracket has a more direct path than the other. Liverpool and Bayern appear destined for a titanic semifinal matchup after drawing Benfica and Villarreal, respectively. It’s not to say that the two underdogs can’t pull off something spectacular, it’s just that they drew the wrong teams against which to try to do so.

Liverpool has won 16 of last 17 games in all competitions (the only loss came in the round of 16 second leg vs. Inter Milan), has kept 10 clean sheets in its last 13 and is pushing Man City for the Premier League title. Sandwiched between the two quarterfinal legs is a trip to City on Sunday, but a strong showing in Portugal on Tuesday would go a long way toward easing some pressure. And given Liverpool’s form of late and its depth, that should be the expectation.

The only reason that Bayern is in the second spot and not the first is that Villarreal seems to be a slightly tougher draw than Benfica, with whom Bayern shared its group.  Bayern is coming off consecutive four-goal performances in the Bundesliga and has its eyes set on a 10th straight league title, given its nine-point lead atop the table with eight games to go.

After its shocking 3–0 win over Juventus in the round of 16, Villarreal has put the continent on notice, and Bayern won’t be one to be taking its foe lightly. It would be easy to get caught looking ahead to a potential showdown with Jürgen Klopp’s Liverpool in the semifinals, but this Bayern team is too experienced and balanced, especially in his high-octane attack. Led by a Robert Lewandowski hat trick, the German giants crushed RB Salzburg in the round of 16 second leg, 7–1, as part of their 22-goal run in the last seven games.

The next part of the bracket is where things get very interesting. Man City appears to be the most complete team in the competition on paper, but Pep Guardiola tends to crumple up that paper in big games. When asked Monday whether he tends to overthink big games, Guardiola gave a tongue-in-cheek response: “We play with 12 tomorrow.” And if there’s one coach and team you don’t want to overthink against, it’s Diego Simeone’s Atlético Madrid.

Still, Man City has lost only two games since the end of October (a span of 29 matches), and there’s a reason for that. City cruised to a 5–0 win in the first leg of the round of 16 against Sporting after surviving a tough group with PSG. And after losing the final to Chelsea last season, there is a greater sense of hunger in this team as it looks for its first Champions League title. The journey is difficult with Atlético potentially followed by a semifinal against Real Madrid or Chelsea. And if it gets past them, then Liverpool and Bayern could await in the final. On top of that, there’s a fight atop the Premier League with Liverpool. But if there’s a team that can stand up to such a challenge, it’s this Man City side—as long as it isn’t tinkered with too much.

Chelsea is still the reigning European champion and should be feared as such, but it seems to have the toughest route to lifting Ol’ Big Ears on May 28. First up is its quarterfinal against a Real Madrid side that turned the tables on PSG in the final half-hour of the tie. If Chelsea eliminates Real for the second straight year, the winner of Man City–Atlético, both of which Chelsea eliminated last season, awaits in the semifinal. And, as we know, Liverpool and Bayern are favored to reach the final.

But let’s start with the Real matchup. Last season in the semifinal, Chelsea used the second leg at home to its advantage with a 2–0 (3–1 agg. victory). This time around, Chelsea hosts Real first at home after cruising past French champion Lille in the round of 16. Funnily enough, Sergio Ramos is the only absentee of the 22 players who started in the clubs’ last meeting nearly a year ago. A 4–1 league loss over the weekend to Brentford should give the Blues some concern. But under Thomas Tuchel, Chelsea has been impeccable in the Champions League to the tune of 10 clean sheets in 15 matches. Look for defense to win out again.

Real Madrid, and particularly Karim Benzema, made the most noise in the round of 16 when it came back from a 2–0 aggregate deficit in the final 30 minutes of the tie vs. PSG. Benzema’s 17-minute hat trick showed that no lead is safe from Real’s experience and tenacity, also proving that no team wants to face Real Madrid when it is facing Champions League elimination.

However, Real Madrid has never beaten Chelsea in European competition, which includes last season’s two semifinal games. While Real seems to have a sturdy lead atop La Liga’s table, its recent 4–0 defeat to Barcelona leads to plenty of concerns about its defensive setup. And in a tie that should be very close (and very entertaining), a lockdown defense is usually what provides the difference.

The good thing for Simeone is that he is comfortable, if not thrilled, about the fact that his bigger/stronger/faster opponent is the one with everything to lose. Somehow, Atlético always seems to be playing with house money, and that always seems to be O.K. with him. And after leading Atlético to his second La Liga title, Simeone will surely go all in on taking down the giants of the European stage in search of the club’s first Champions League title.

However, to win the title may be one of the biggest feats in Champions League history. After a nail-biting last-16 tie with Manchester United, Atlético must now head to the more formidable Manchester side in Guardiola’s City, where it definitely cannot look ahead to meeting Chelsea/Real in the semifinal and then potentially Liverpool or Bayern Munich. But is it out of the question? Never, not with El Cholo at the helm.

There is a lot to celebrate about the Yellow Submarine over the last year, starting with their stunning penalty-shootout win in the Europa League final last season. Without that win over Manchester United, Villarreal would have never found itself in the Champions League this season, let alone in the quarterfinals after upsetting Juventus. Its trip to Turin last month was more than just an upset—it was a stunning show of force.

Wednesday’s home match against Bayern will be manager Unai Emery’s first Champions League quarterfinal of his career, and the club’s first since 2009. The one thing Villarreal has going for it is a raucous home crowd from the get-go, and an early goal would go a long way on multiple fronts. Can it be done? Maybe, but probably not. Just don’t try to say that to this resilient side.

Unfortunately for Benfica, the Portuguese side was the club that everyone wanted to draw in the quarterfinal. Benfica squeezed past Ajax in an entertaining round-of-16 matchup and survived a group with Bayern (despite being destroyed on two occasions by the German giants). And while it would have preferred Villarreal or maybe even Atlético, Benfica will have to face one of the most in-form teams in the world.

Historically speaking, Liverpool is a relatively familiar opponent for Benfica, with the two having met each other eight times in European competition. Liverpool has lost each of its last three games vs. Benfica, although 12 years have passed since the most recent instance. Benfica must hope that Liverpool is looking ahead to Sunday’s Premier League showdown against Man City if it wants to stun the 2019 winners in the opening leg. And even then, Liverpool has a second leg at Anfield to look forward to as a failsafe.