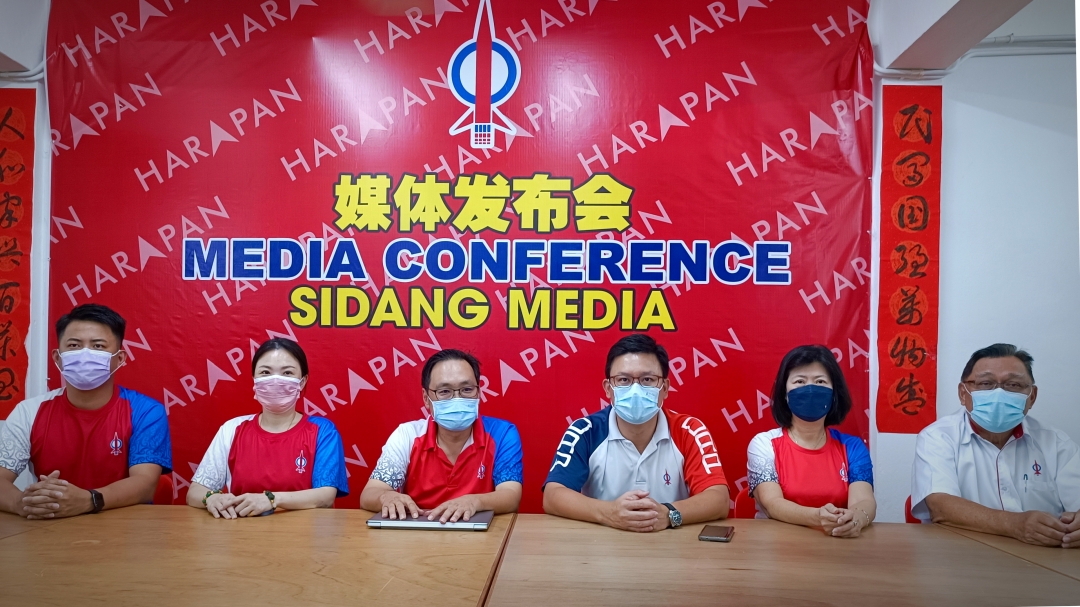 Chong (fourth right), with (from right) Chiew, Irene, Ling, Lau and Wong at the press conference. – Photo by Peter Boon

SIBU (May 7): Democratic Action Party (DAP) Sarawak chairman Chong Chieng Jen said capturing as many seats as possible from the Gabungan Parti Sarawak (GPS) in the coming 15th General Election (GE15) is the basis and foundation of negotiation between his party and Parti Sarawak Bersatu (PSB).

He told a press conference today that the goal of DAP Sarawak and PSB was to capture as many seats as they can from GPS’ 18 parliamentary seats in Sarawak.

“I think this is important because one seat to GPS is one seat to Umno. So I think that is our main goal for the negotiation of seats so that we can gather all our strength and capture as many as possible – the 18 seats which GPS is holding, which they have proven to be supportive of Umno, regardless of situation.

“I think that forms the foundation of the whole negotiation and (DAP Sarawak deputy chairperson) Alice (Lau) is heading that negotiation, and we will have another round of negotiation with PSB and the other parties,” said Chong.

Asked if there is a timeframe to conclude the negotiation, he said they hope it would be as soon as possible.

“We hope to conclude as soon as possible, time is running (short). Is very important that out of 18 (GPS’ parliamentary) seats, we have to capture as many as possible.

“Is not an easy task, even if the oppositions work together. You need time to build up. So the focus is on the 18 seats because one seat to GPS, is one seat to Umno.

On a related topic, Chong said a national party is needed to face-off against Umno at the national level politics.

He said this was because any local party will just be swept away by the huge flow of national politics.

“As a local party, a state party, no matter how strong GPS or any local party, they cannot provide check-and-balance against Umno.

“That is the political reality because of the bottlenecks of their political strength. At most, they are only strong in one state. On the contrary, you need a national party to take on Umno.

“From the Sheraton Move and all past history, it has been proven that GPS will continue to support Umno to be their ‘bed fellow’.

“So if GPS gets stronger, it will mean that Umno is stronger and that is no good for Sarawak to regain its rights and special position within this Federation of Malaysia.

Chong also dwelled on the dialogue session between the DAP state committee and grassroot members in Sibu.

He pointed out that this was part of the programme for the statewide visit by the party state committee, after the new committee was formed earlier this year.

He said the discussion basically dwelled on what role do Sarawakians play in the national politics especially in the impending general election.

Additionally, dialogue also provided their members on the history of splits within Umno.

“As Sarawakians, do not give Umno a second life in national politics and that we should continue to create a situation – the political environment, whereby Umno will continue its splits.

“Basically, this is what we had in our dialogue with our members today,” he said.