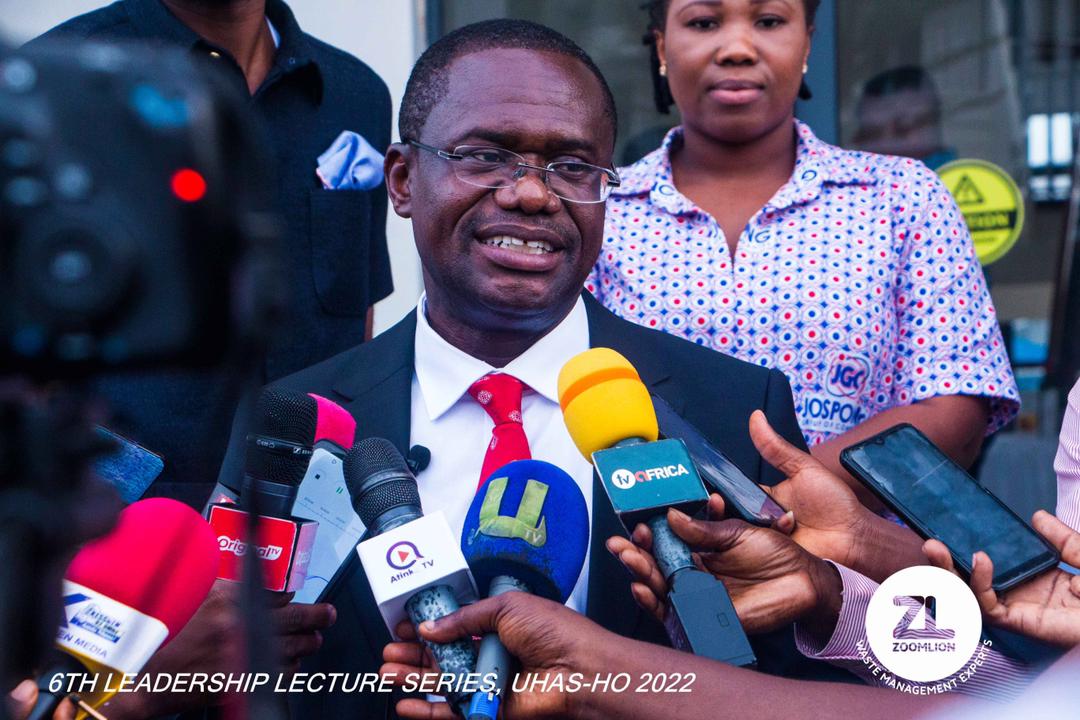 Business magnate, Dr. Joseph Siaw Agyepong, has advocated continuity in governance irrespective of which party was elected into power.

He explained that such an approach will help put the country on a sustainable development path which benefits and gains will inure to the citizenry.

Delivering a lecture to commemorate the 6th University of Health and Allied Sciences (UHAS) Leadership Lecture Series in memory of late President John Evans Fiifi Atta Mills at Ho in the Volta Region on Friday, April 8, 2022, Dr. Siaw Agyepong, who is the Executive Chairman of the Jospong Group of Companies (JGC), stated that this system will also help a great deal to sustain and further improve upon the gains made in the sanitation environmental space.

He said the practice where “our governments truncate and in some cases abolish completely national development projects” was not helping the development course of this nation.

“This practice is rather retarding the progress of our country which obviously is not in our best interest,” he bemoaned.

He spoke on the topic “Sustaining Environmental Sanitation Gains Through Specialised Education.”
The public lecture was chaired by the Vice Chancellor of UHAS, Professor John Owusu Gyapong,

Key personalities such as the UHAS Council Chair, His Lordship Justice Jones M. Doste, Justice of the Supreme Court; the Volta Regional Minister, Hon. Dr. Archibald Yao Letsa the Member of Parliament for North Tongu, Hon. Samuel Okudzeto-Ablakwa; and some leading NDC members and MPs in the region were present at the lecture.

The UHAS leadership lecture was instituted by the university in 2016 in memory of the late President Prof. Mills due to his instrumentality in the establishment of the UHAS and his general leadership qualities.

Among its goals are to inculcate leadership skills into the university community, build mentorship, develop the capacities of health professionals, stir intellectual debate and innovation.

He admitted that societal and organisational perception of waste has always informed policies and investments in the waste management space.

However, he said in recent times that appears to be changing, adding that “society is progressively moving away from simply considering waste as an end-product for disposal toward considering it as a resource.”

This, he noted, has shifted the paradigm of carting waste for burning to the use of simple modern collection processes to dumping at landfill sites.

“The establishment of UHAS is, therefore, timely and critical in improving healthcare delivery in Ghana. Health is understandably the core of all aspects of human development. And it is my hope that UHAS sticks to this focus, especially since the health delivery system is being comprehensively expanded, thanks to AGENDA 111,” he said.

Dr. Siaw Agyepong was full of praise for what he described as “significant strides” made
by UHAS in the last decade.

“I must say that I have been very pleased with the impressive works done so far. In the short years of its establishment, I am very impressed that UHAS is making significant strides at the national, continental, and global levels,” he said.

While commending UHAS for organising the lecture, the executive chairman of JGC eulogised Prof. Mills, describing him as a President “whose leadership philosophy cohered strongly around humility and service to the people.”

The Vice Chancellor of the UHAS, Professor John Owusu Gyapong, said it was most unfortunate that people with good ideas turn to sit on them.

He stressed the need for people with ideas to be up and doing, calling on them to make use of what they have and can do.

He said success was tied to initiative, stating that “we are all potential leaders.”