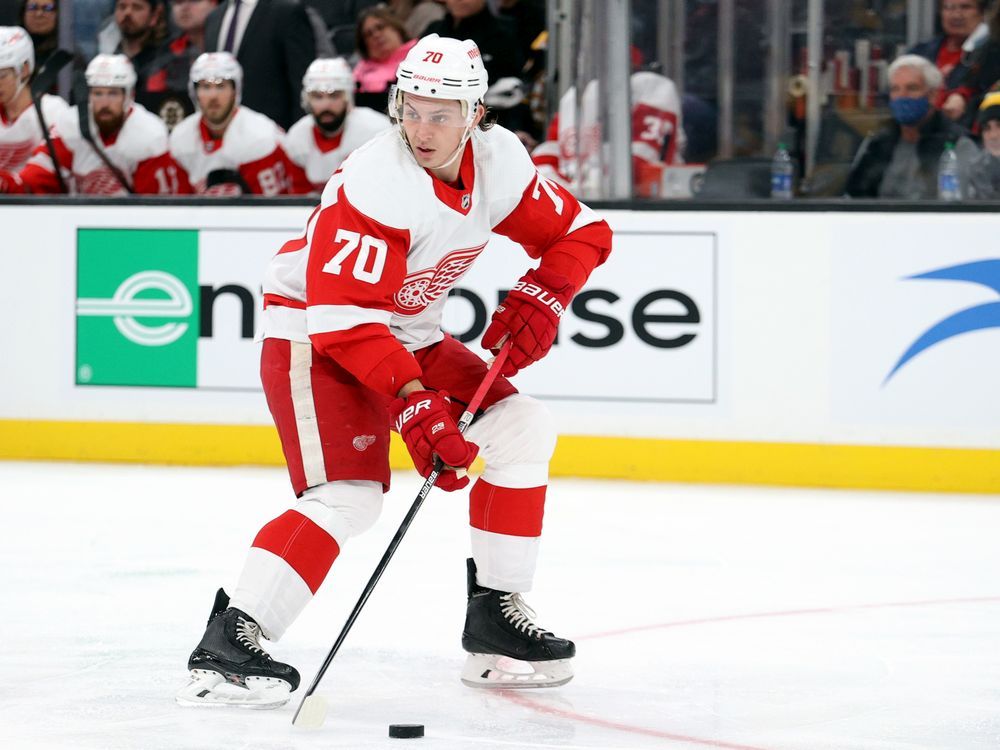 A little levity can go a long way to address adversity and uncertainty.

Troy Stecher and Brock Boeser are not only former teammates and best friends — it dates back to their bond in a 2016 NCAA championship run with the University of North Dakota — and that can cut through any angst. Whether sidelined by wrist surgeries or the looming National Hockey League trade deadline Monday, there’s constant support and a good sense of humour.

Deep down, you know Stecher is stoked to play his first game as a visitor in Rogers Arena on Thursday night after not having his contract extended by the Vancouver Canucks following the 2019-20 season.

He agreed to a two-year, US $3.4-million deal with the Detroit Red Wings, but wrist surgery in early November after being hurt in practice limited the Richmond native to 14 games this season.

“It’s exciting,” said Stecher. “Obviously, growing up here and going to games and then playing, I have a ton of memories. The guys and the people that you meet around the organization and how the city treats you as a player.

“Everybody was very supportive, whether there were highs or lows, and they always had your back. It will be a bit different tonight. I’ll be a little nervous, but I’m excited for the challenge.”

Boeser took the edge off by tossing a barb at his buddy following the game-day skate.

Stecher and Boeser, who both play the game with dogged determination, are also … well, dog owners. Boeser can still boast about his pooches, Milo and Coolie, finishing first and second, respectively, in the Canucks’ annual dog race last month.

Stecher owns a fan-favourite big Bernese mountain dog named Phoebe, and if she was in that field Boeser didn’t like the chances of being a contender.

“Phoebes probably would have got last, so it doesn’t matter,” said Boeser with a laugh. “We talk about everything in general and we stay in touch, We FaceTime a lot and it’s just being there for him and talking every day.”

Stecher laughed at the dog shot because he knows deep down that Boeser is cut from a caring cloth. He’s never too far away to talk about getting through family challenges with their fathers, the good-old days at North Dakota and reliving championship memories.

“He’s just a real good human,” Stecher said of Boeser, who had wrist surgery in college.

Stecher knows you can get in a comfort zone when playing professionally in your hometown, so relocating to Detroit was a dramatic shift for Stecher. He joined an Original Six franchise that is going through a transition with exciting rookies like Lucas Raymond and Mortiz Seider.

“A different opportunity and experience, and you take it as you go,” reasoned Stecher.

Where that could take him at the trade deadline or in the off-season is the big unknown. Stecher, who will become an unrestricted free agent this summer, turns 28 on April 7 and could be dealt or play elsewhere. However, his health has been the biggest concern, so he’s not consumed by trade speculation.

“I got hurt at the beginning of this year after working out all summer and it’s a mental and physical grind being away from the team because I was on a separate schedule and not travelling,” said Stecher. “I focused on getting healthy and when I returned (Feb. 12), I wanted to make sure it was at the highest level possible.”

What Red Wings coach Jeff Blashill knows for sure is that the person is as good as the player because Stecher has helped mentor younger defencemen while continuing to play his own smart game.

“He competes like crazy and brings our team competitiveness up a level,” said Blashill. “He keeps it pretty simple with the puck and does a good job of getting it out of our zone. He doesn’t try to make something out of nothing to live another day. That’s when he’s at his best.

“We’ve had a lot of guys go through long-term injury situations and he’s right up there with the best in how hard he has worked to get back. Guys take notice of that. He’s been a real good piece in our room the last couple of years — no doubt about that.”

If Brad Hunt is having a bad day — not that it’s likely — you’re not going to hear about it.

The upbeat depth defenceman delivered another rousing reminder Thursday that he has never taken a day for granted.

The 33-year-old Maple Ridge native has been a reliable third-pairing fit for Canucks coach Bruce Boudreau. The enthusiasm that comes with playing 30 games is helping to stoke a playoff drive.

“I love hockey so much that I’m not going to let not playing ruin the experience for me,” said Hunt, who sat out 11 straight games from Nov. 17 to Dec. 8 and never whispered a word of discontent.

“I feel like I need to be there for my teammates, no matter what. That’s how a team is built. It’s how you show up to the rink, no matter what position you’re put in.”