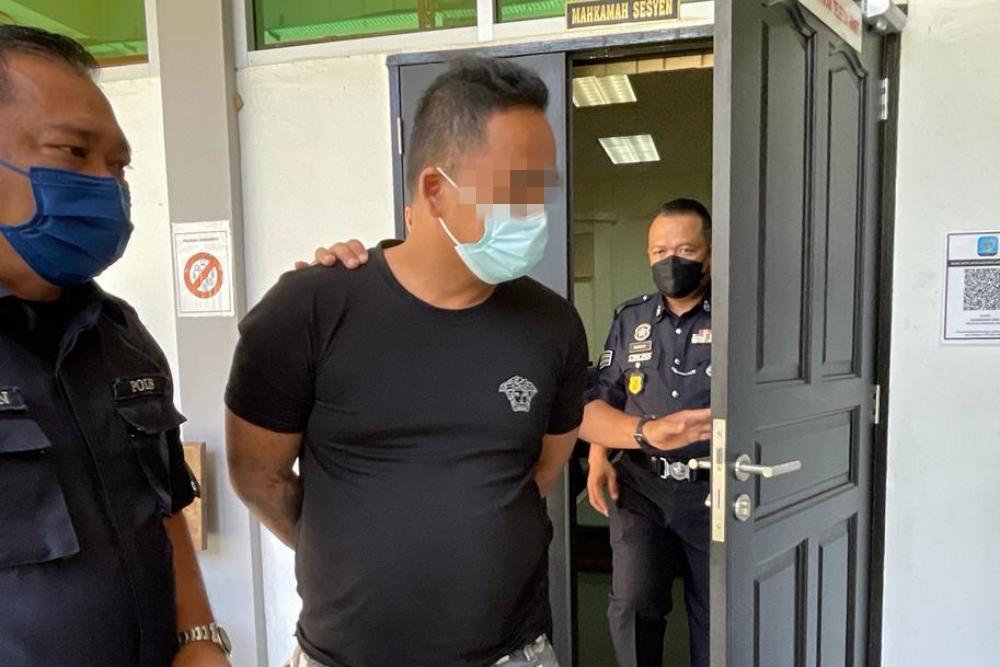 The ex-serviceman being led out of the courtroom.

SIBU (April 28): A former soldier was sentenced to 18 years in prison and 34 strokes of whipping by the Sessions Court today after he pleaded guilty to raping and sexually assaulted his own daughter.

The Section provides for an imprisonment term for a term not less than eight years and not more than thirty years and shall be also liable to whipping of not less than 10 strokes upon conviction.

For each charge, he was sentenced to 18 years imprisonment and 10 strokes of whipping.

He also faced four counts of sexually assault under Section 14(a) of the Sexual Offences Against Children Act 2017 which carries with an imprisonment term not exceeding 20 years and shall also be liable to whipping.

For the offences, he was sentenced to three years imprisonment and one stroke of whipping for each charge.

Sessions Court judge Marutin Pagan ordered that all sentences run from the date of arrest on April 21.

According to the fact of the case, on April 12 at about 1.20pm the victim told her teacher (complainant) at her boarding school that she had been raped by her father at their house.

In his mitigation, the accused who was unrepresented prayed for lenient sentences. He promised the court that he would not commit the same offence in the future.

He also said that he would be a good father and a good husband to his family.

Deputy Public Prosecutor (DPP) Rex Heng Yi Min prayed for a deterrent sentence in view of the accused being a former soldier.

He said the deterrent sentence would reflect the stiffness of the law in Malaysia to safeguard the interest of minor sexual victim.

“The prosecution believes that the accused had pensioned the spirit of safeguarding the society and his own family should still be in him.

“This is a case whereby the accused have clearly took advantage of his dominant position as a biological father of the victim to commit the sexual assault and rape on the victim. This is a clear abuse of trust,” he said.

Marutin accepted the guilty plea of the accused.

He convicted him after considering the brief facts, guilty plea, plea in mitigation, and the public interest.