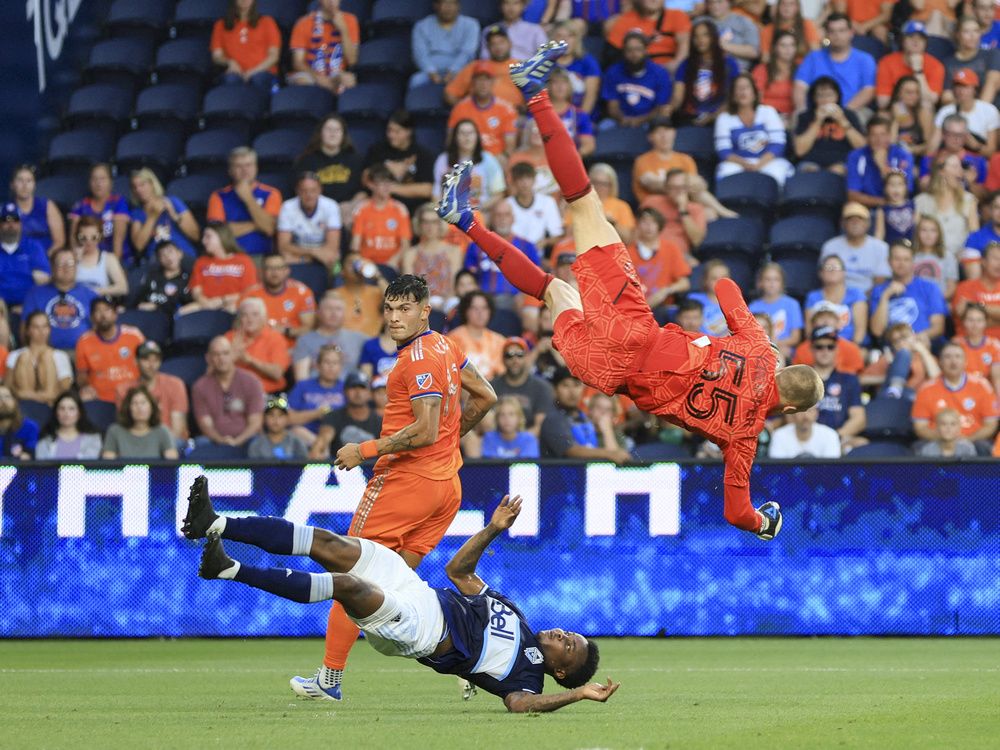 Tosaint Ricketts came into 2022 as a fringe player, one who could just have easily been in a suit in the Vancouver Whitecaps front office as suiting up for the first team.

There’s plenty of life left in those legs.

The nearly 35-year-old Ricketts, leaning into his career-long role as a super-sub, did it again Wednesday, setting up Cristian Dájome’s game-tying goal in the 82nd minute — less than 60 seconds after coming on as a substitute — as Vancouver earned a point in a 2-2 tie with FC Cincinnati at TQL Stadium on Wednesday.

“Every time that he comes in, he has an impact. That’s the reason why he’s still in the team. He knows his role, a 15, 20 minute player, bring energy and he does it every time,” said head coach Vanni Sartini. “Tos is a competitor. He’s a guy that in his career, decided to go everywhere to play — Lithuania, Finland. … He’s a guy that no one gave him anything and he earned everything in his life.

“So when you see that kind of hunger from a 35-year-old, it can be also a fantastic example for the young guys that we have in the team.”

The Whitecaps (7-9-4) battled back from a goal down twice, including one coming inside the first three minutes, to tie the game. Ricketts had the 90th minute winner against Toronto earlier this season after coming on in the 85th, two weeks after scoring an 11th-hour tying goal against Montreal that was overturned on review. “Offside by a millimetre,” said Sartini.

It was the first goal in 16 games for Dajome, who also assisted on Ryan Gauld’s goal, as the Caps picked up their first tie in 10 road games this season (2-7-1).

Álvaro Barreal and Brandon Vázquez scored for Cincinnati (7-7-6), who had their fourth straight tie in their six-game unbeaten stretch (1-0-5).

The short-handed Whitecaps lost another body 30 minutes into the game when Cody Cropper and Javain Brown came together hard in the Vancouver box.

Brown was shielded by a Cincy player and didn’t see the onrushing Cropper, having his head snap back like he’d taken a Muhammad Ali jab when he barged into the airborne keeper.

Cropper, in turn, spun like a cartwheel and landed on his head and shoulders, his body bending in gruesome Gumby-like fashion.

Brown was forced to leave the game immediately with a concussion, with Jake Nerwinski taking his place on the back-three, while Cropper gutted out the rest of the half.

But after the teams took the field for the second 45, it was Isaac Boehmer making his MSL debut and assuming the duties between the sticks.

He absolutely robbed Sergio Santos in the 82nd minute when the Cincy player, with all the time in the world, couldn’t put it past the rookie. Dajome scored just moments later.

With the game equalized, Boehmer earned the team a point with a reaction save on a Santos header with just four minutes left in regulation.

“Isaac was monumental,” said Sartini. “It’s not only the big saves, it’s a kid that never played in MLS, thrown in the middle of this game with a lot of fans. (One) could be overwhelmed, but we know that Isaac is kind of a cool cat. He maintained his composure. I am happy that he took his chance and he did very well.”

There was no update on any of the injured players post-game. Brown and Cropper are in concussion protocols, along with Owusu. But there are still a few days to recover before the next game in Portland.

19: Number of first-half goals Cincinnati have scored this season, most in the league. The Caps have scored 22 — total — in 2022, and had the fewest (7) coming into the game. They’re off the bottom of the table in that stat, with Sporting Kansas City and Portland still mired in the basement.

1,090: Number of days since Cincy last beat a Western Conference opponent. They have gone 3-15-1 record against Western foes since joining MLS in 2019, including an 2-7-1 mark at home. The Orange and Blue’s last win over a Western team came against the Orange Houston Dynamo, beating them July 6, 2019 at Nippert Stadium, a 3-2 win.

0: Number of wins the Caps have when trailing after the 75th minute this season, a total of seven games.

Against Minnesota, the Whitecaps admitted they’d been drinking their own Kool-Aid. They got overconfident, and when Minnesota scored the equalizer, then the go-ahead goal, it popped that ego balloon from which they never recover.

“We got carried away after the goal. We scored so we stopped doing the things that we needed to do and that’s what cost us,” Lucas Cavallini said this week.

It could have gone the same way when Cincy’s Álvaro Barreal scored three minutes into the game, but it took the Caps less than two minutes to respond, with Gauld getting his third goal of the season.

Brandon Vázquez did put the home side ahead again, but the Caps remained consistent with their effort, finally getting rewarded late in the game when Tosaint Ricketts — who came on as sub a minute before — set up Dajome for the equalizer.

The Whitecaps continue their road swing on Sunday when they travel to Portland to face the Timbers at Providence Park.

The Caps are 9-16-7 all-time against Portland, though they won their last visit there in 2021, winning 3-2 on a Dajome penalty kick in the 82nd minute.

Portland currently leads the Cascadia Cup standings, having beaten both Vancouver and Seattle this season.