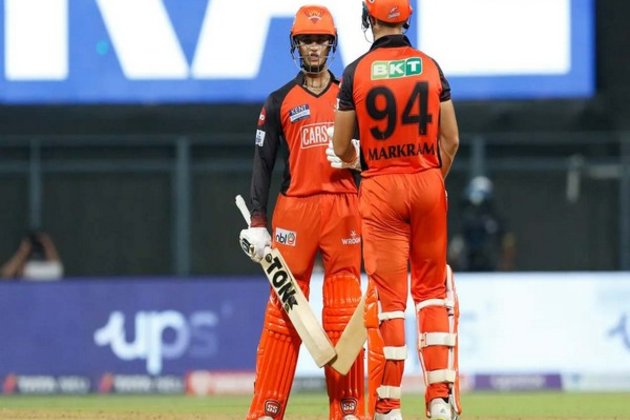 Put to bat first by the Titans, Sunrisers Hyderabad were off to a solid start. Left-hander Abhishek Sharma laid down the foundation for a good start by hitting pacer Yash Dayal for two boundaries on the off-side in the second over. But Mohammed Shami, who had an expensive first over, struck in the 3rd over of the game and bowled out Kane Williamson on 5 with the team’s score at 26.

After being dropped by Rashid Khan at point, the in-form Rahul Tripathi showed some aggressive intent, smashing Shami for 6,4,4 in the fifth over. But Shami had the last laugh as he dismissed the batter for 16 on the last ball of the over when the score was 44.

At the end of the powerplay, SRH were 53 at the loss of two wickets in six overs, with left-hander Abhishek Sharma looking good and South African batter Aiden Markram at the other end.

Sharma continued attacking the off-side and slammed spinner Rashid Khan for a massive six over long-on. The batter survived a stumping attempt in the ninth over. At the end of the 10th over, SRH looked in a solid position having scored 84 at the loss of two wickets.

A six by Markram at the end of the 11th over brought the 50-run partnership between the duo in 36 deliveries.

Soon, with another six off a Rashid Khan delivery over deep midwicket, his third against the bowler, Sharma brought his half-century in 33 deliveries, his second in this season.

The duo continued to dominate the GT bowling lineup, Khan in particular. At the start of the 16th over, pacer Alzarri Joseph clean-bowled Sharma for 65 off 42, when the team’s score was 140. This ended the 96-run partnership between him and Markram.

With the score at 145/3 in 16 overs, Shami was brought back into the attack. The bowler made an immediate impact, sending Nicholas Pooran back to the pavilion for 3 after he was caught by Shubman Gill at the long-on. In the same over, Markram brought his half-century as well.

At the end of the 18th over, Markram was dismissed by Yash Dayal for 56 off 40 with an assist from David Miller’s safe hands, when the team’s score was 161. Another dismissal followed at the start of the 19th over, with all-rounder Washington Sundar being run out by Joseph for 3.

In the final over by Lockie Ferguson, Shashank Singh and Marco hit four sixes collectively, with Singh hitting a hat-trick of sixes. With this, SRH finished off at 195/6.

Shami was the pick of the bowlers for GT with 3/39 in four overs.