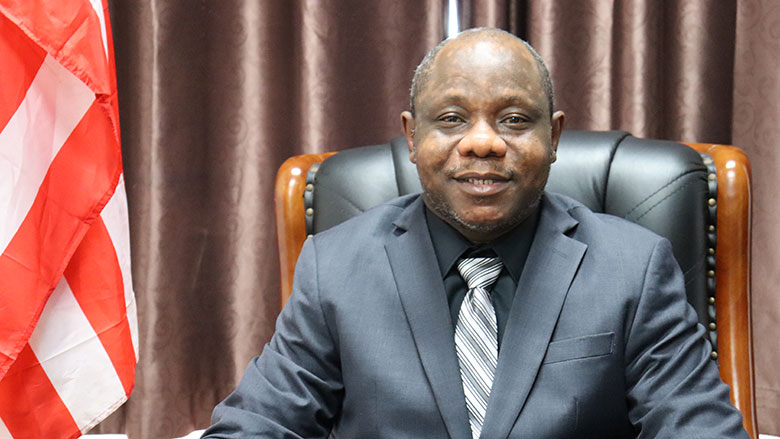 Liberia’s Finance and Development Planning Minister, Samuel D. Tweah has extoled the World Bank for its continuous support towards the government of Liberian through its Pro-poor Agenda for Prosperity and Development (PAPD).

In his commendation, Minister Tweah named the National Fisheries and Aquaculture Authority (NaFAA) and the Country’s Education sector as key areas in which the World Bank has tremendously supported since the inception of the Weah led-administration, and thereby described said feat as “remarkable”.

He made the comments yesterday, during a meeting with some of the Bank key officials including its Country Manager, Khwima Nthara at his Ministry of Finance office in Monrovia.

Minister Tweah also during the meeting termed the World Bank overwhelming support to the education and fisheries sectors of Liberia as a big boost to the country’s economic and human capacity growth, another key area of the government’s PAPD.

“Because the Bank is impress with progress been made by the Government in the Fishery sector, there is a possibility sourcing of additional financing of 20 M through one of its partners,” he said.

The Country’s Finance minister further bragged that Liberia Sustainable Management of Fisheries project will continued to receive tremendous support that  will lead to the expansion of the Montserrado fishing pier which will enhance the livelihood and income generation for the Government and targeted beneficiaries.

Minister Tweah said early childhood project is on course but more support is needed to improve other areas in Education.

It can be recalled that a World Bank delegation head by its World Bank Practice Manager on Environment, Natural Resources and Blue Economy for West and Central Africa, Sanjay Srivastava expressed his excitement over the government of Liberia strong will demonstrated in managing funding meant to improve Liberia fisheries sector.

As result, Mr. Srivastava then disclosed plans of additional funding by the Bank towards NaFAA to enable the managing staff of the institution smoothly runs its operation in the interest of the country and its citizens.

“The additional funding by the Bank was prompted by the promise assured by the government of Liberia that they can really grow the fisheries sector economy very well and so far they have shown leadership and motivation to really use the money effectively and they have laid out clearly a good agenda both on the investment side and the livelihood side as well as on the reforms side in terms of the changes they want to bring,” he said.

Srivastava further stated that he was pleased with the level of work the fisheries body was doing under the director generalship of Madam Emma M. Glassco, noting that Liberia is one of those countries with a strong fisheries program.

“Liberia is one of the countries in Western-Central Africa we have a strong program and we are very delighted. This is my first visit to Liberia and I’m very excited to be here and very pleased to meet and work with Madam DG and her team, who are doing a very exciting job,” he intoned.

According to him, the fisheries sector is being viewed as an important venture for enormous progress, and as such the World Bank’s interest is to see it elevated for the purpose of creating huge revenue potential for the Liberian government and not only for job creation.

“We see this project to help not only to create more jobs for the local communities and to grow the local economy, but also to grow more revenue potential for the government of Liberia,” Mr. Srivastava”