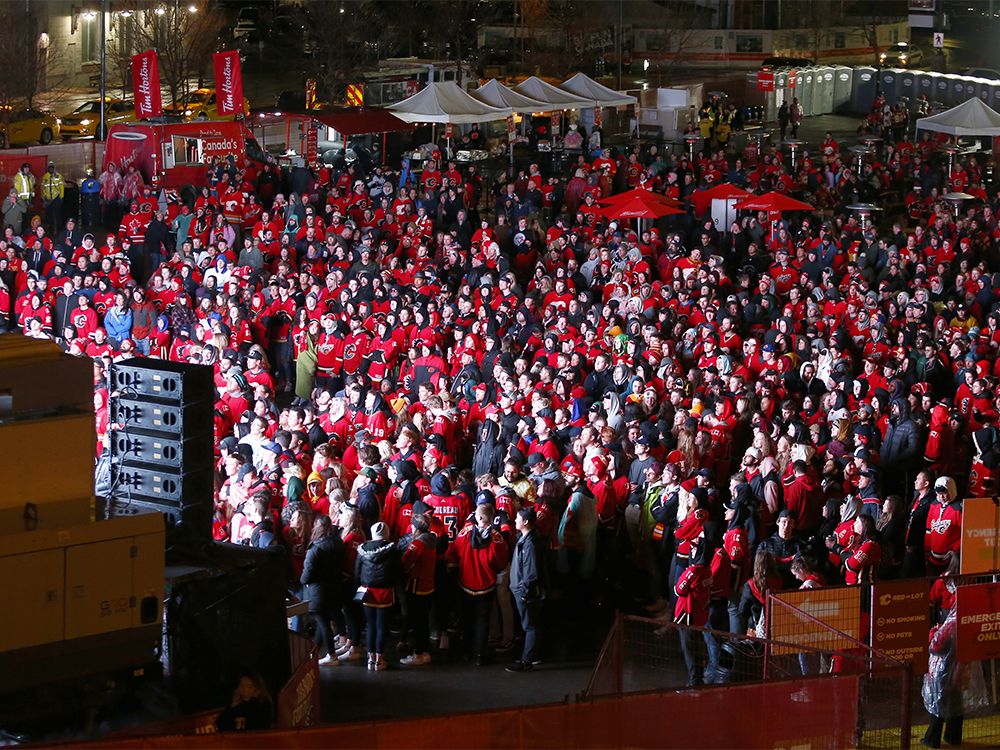 With Calgary Flames playoff tickets going on sale, the team has announced options for those not able to get into the Saddledome.

The NHL club announced on Wednesday they are bringing back the Red Lot Community Viewing Party on Stampede Grounds for all home playoff games.

“It’s really important, I think, for this city, not just for the Flames,” said Mike Franco, vice president of sales, customer service and ticketing. “We’re just seeing such a remarkable level of excitement from people about us being back in the playoffs and hosting and this is an opportunity when people can dream about how far we can go.

“To have an opportunity where they can not only share in that experience but they can be together, because we know there is nothing better than celebrating a Flames goal or a Flames victory when you are with other people.”

The party was introduced for their last playoff run and received strong turnouts, even when it rained. There is capacity for 5,000 fans this year.

The party will be free of charge and open to fans of all ages. The game will be broadcast on giant screens along with music, interactive stations, prizes and food and beverages.

There will also be appearances from team alumni, Harvey the Hound, Terry Cahill, On The Bench, Red City Drumline and others. The lot will open up three hours before puck drop and be open until the final horn goes.

Fans are encouraged to show up in red to support the team, while the Flames retail staff works on new items for the post-season, including big gold-coloured chains with the team’s logo.

Single-game tickets also went on sale Wednesday morning. The Flames, who locked up first place in the Pacific Division last week, still do not know who they will play in the first round or when Game 1 will be.

There is also the spectre of a Battle of Alberta in the second round if both the Flames and Edmonton Oilers survive, but Franco said the excitement is there regardless of who they play.

“I don’t spend too much time worrying exactly who we’re going to play … I just want us to go as long as we can go and keep playing hockey,” he said.

The announcement comes one day after the city announced it was lifting the court injunction on gathering, designed to crack down on protests in the Beltline over COVID-19 restrictions.

The Beltline is home to the Red Mile which has become a popular gathering place since the Flames’ run to the Stanley Cup in 2004. The ability to resume these festivities has the potential to be a needed boon to the restaurants and bars in that stretch of 17th Avenue S.W.

In a statement from the City regarding the lifting of the injunction, they said event organizers need to meet conditions to mitigate the impact on the community while permitting takes into account public safety and noise, protection of public spaces and infrastructure, waste and recycling concerns, noise and traffic control.

“We are working with all partners to support a safe and fun Red Mile experience,” read the statement. “All participants will be expected to follow laws and bylaws, and be respectful of fellow citizens and businesses, as always.”

There is the potential for viewing parties to be expanded for road games in the future, but for now, Franco said the restaurant and bar community is well set up to serve as places to gather for those games.