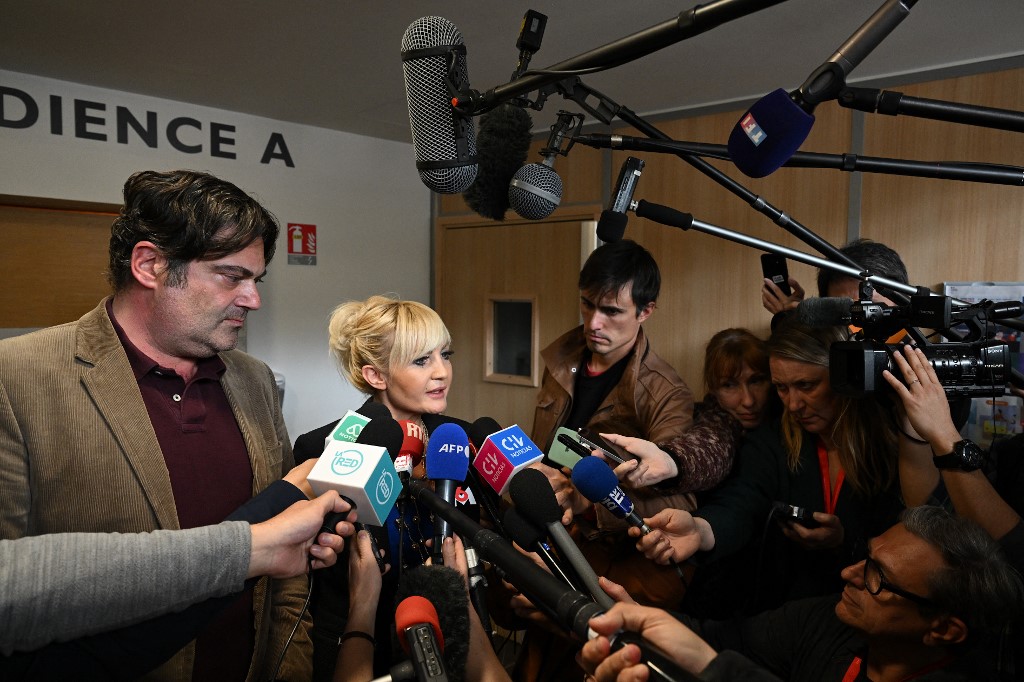 French lawyers Randall Schwerdorffer (left) and Sylvie Galley (centre), respectively representing Arthur Del Piccolo-Saleh and Narumi Kurosaki’s family, address the press at the Besancon courthouse on the last day of the trial of a Chilean man on charge of murdering his Japanese ex-girlfriend in 2016 in eastern France, on April 12, 2022. — AFP photo

BESANCON (April 12): A French court on Tuesday sentenced a Chilean man to 28 years in jail for murdering his Japanese ex-girlfriend in 2016 in eastern France, after a high-profile investigation spanning three continents.

The jury at the court in Besancon convicted Nicolas Zepeda, 31, of murdering Narumi Kurosaki, then aged 21, in December 2016. Prosecutors had called for a life sentence.

Kurosaki, a brilliant scholarship student, arrived in the eastern city in the summer of 2016 to learn French. She disappeared on December 4.

Zepeda, with whom she had broken up a year before, was the last person to see her alive.

As the verdict was read out after four hours of jury deliberations, Zepeda remained motionless, looking dejected.

Sitting opposite, Narumi Kurosaki’s mother Taeko Kurosaki watched him, her head tilted slightly to the side, handkerchief in hand and still holding the photo of her daughter she had clutched since the start of the trial late last month.

“It’s a huge relief for the family,” said Sylvie Galley, the lawyer for Kurosaki’s family.

“They will leave today with a lot of pain and suffering… but also with the feeling that this pain was heard,” she told reporters.

Earlier, Zepeda, who proclaimed his innocence throughout the trial, again denied murdering Kurosaki.

“I am not Narumi’s killer,” Zepeda told the court before the six members of the jury and three judges retired to consider their verdict.

“I am not who I would like to be but I am not a killer and I am not the killer of Narumi,” he added, speaking in French for the first time in the trial.

Prosecutors alleged that Zepeda was unable to deal with the couple’s breakup, coming to Besancon to kill Kurosaki in her student dorm room before dumping the body in the forests of the rugged Jura region.

The Chilean has admitted spending the night with Kurosaki in December, claiming he ran into her by chance while travelling through France.

But several witnesses reported hearing “screams of terror” and thuds “as if someone was striking someone else” — though none called the police at the time.

But so far no trace has been found of Kurosaki’s remains.

It was more than a week later, on December 13, that a university administrator reported her missing, at which point Zepeda had already left for Chile after spending several days with a cousin in Spain.

Zepeda turned himself in to Chilean police and said Kurosaki had been alive when he left her after spending the night together.

No sign of blood or a struggle was found in Kurosaki’s student room, and all her belongings were still there apart from a suitcase and a blanket.

Zepeda quickly became the prime suspect after he was found to have gone out of his way via a forest, and to have bought matches and a container of flammable liquid.

Some of Kurosaki’s friends received strange messages in the following days from her social networking accounts, which police believe were sent by Zepeda.

He was extradited from his country to France in 2020.

In her testimony last week, Taeko Kurosaki called Zepeda a “liar” and said that “this demon cannot remain free.”

“She expressed five years of suffering during her testimony in court,” Galley said. — AFP