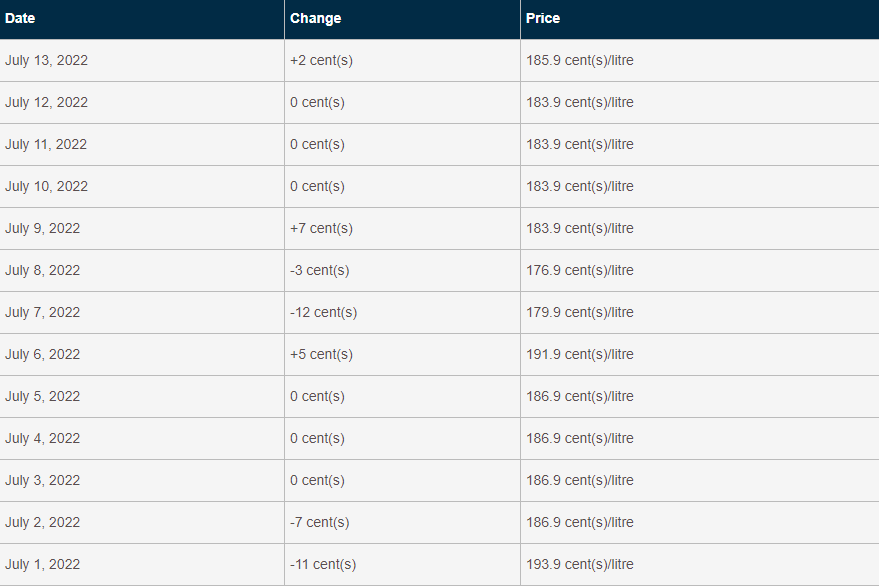 Ontario drivers are about to get some more relief in the form of another significant drop in gas prices.

Roger McKnight, Chief Petroleum Analyst at En-Pro, tells CityNews the price at the pumps will fall eight cents at midnight, reaching 177.9 cents/litre at most GTA stations.

The drop will bring the price just one cent shy of June’s low of 176.9 cents/litre. That price, the lowest since April, was hit last week after prices plunged 15 cents in two days.

Prices in the GTA peaked at 214.9 cents/litre in June, and the lowest price this year was in February, when it was costing drivers 161.9 cents/litre at most stations.

The cheaper gas prices can be attributed to a drop in the price of oil and the speculation of an economic recession on the way. Oil tumbled eight per cent on Tuesday, down $8.25 to just over $95.

The falling price of oil is due to renewed COVID-19 lockdowns in China and ongoing concerns about an economic recession.

McKnight says the drop came despite gasoline inventories still being low, pointing to the shift coming largely from a change in investor sentiment.

“Someone on Wall Street said let’s bang a futures down, the futures market on New York Harbour, because they think we’re heading for a recession here and that’s just gonna erode demand severely. People won’t need much gasoline because they won’t be going anywhere, so that’s why the prices came down. It’s a complete turn of the tables if you ask me,” he says.

Most economists are forecasting the Bank of Canada will raise interest rates by three-quarters of a percentage point on Wednesday, bringing its key rate to 2.25 per cent. A rate hike of that size would be the largest single hike since 1998.

The Ford government implemented a cut of the gas tax by 5.7 cents per litre in Ontario on July 1, and prices dropped 11 cents on that day.