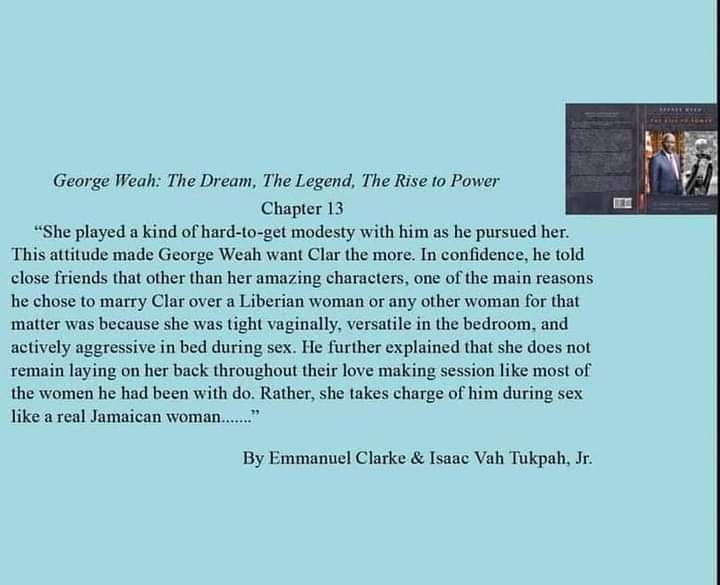 A new book has revealed the reasons behind President George Weah of Liberia choosing to marry a Jamaican woman Clar Weah instead of a Liberian woman.

The book authored by the Chief of Staff of Alexander Cummings, a Liberian opposition leader, Isaac Vah Tukpah, Jr., and Emmanuel Clarke, has generated outrage among Liberian women.

The book titled: George Weah: The Dream, The Legend, The Rise to Power, was published on Amazon.com recently.

In chapter 13 of the book, the authors cited George Weah as telling close friends that other than Clar Weah’s “amazing characters, one of the main reasons he chose to marry Clar over a Liberian woman or any other woman for that matter was because she was tight vaginally, versatile in the bedroom, and actively aggressive in bed during sex.”

“He [George Weah] further explained that she [Clar Weah] does not remain laying on her back throughout their love making session like most of the women he had been with do. Rather, she takes charge of him during sex like a real Jamaican woman…..”, an excerpt of the book read.

A section of Liberians have condemned the book, describing it as an attack on womanhood.

Meanwhile, the book revealed that Mr. Weah’s mother was rapped before conceiving and giving birth to him.