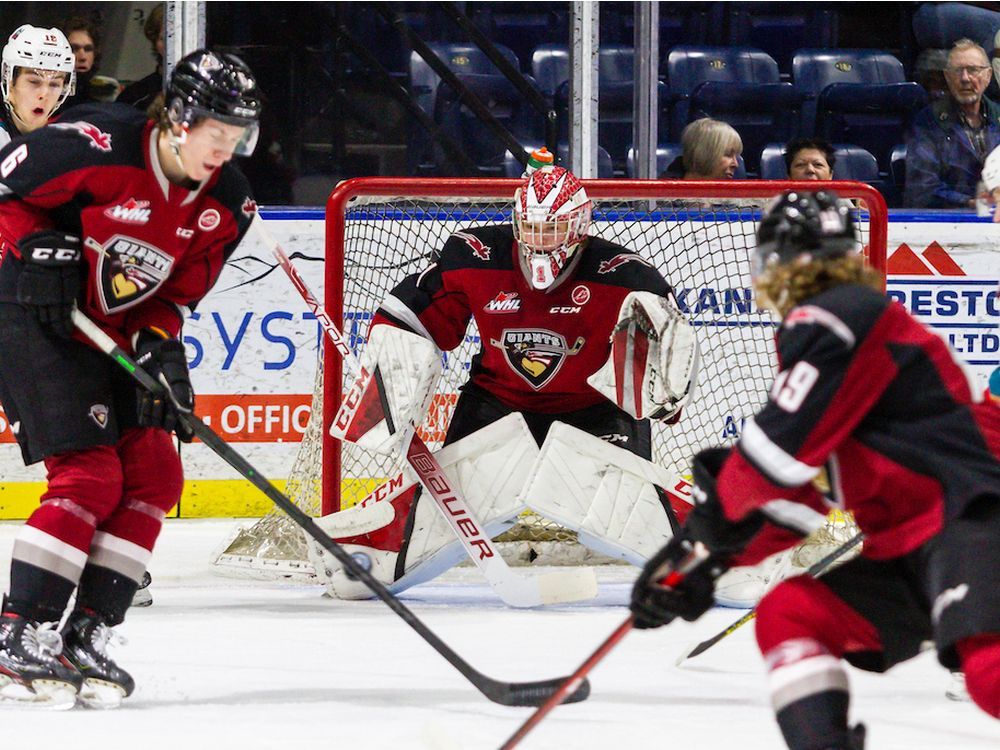 That’s the easy math in the WHL’s Western Conference as the Vancouver Giants, Spokane Chiefs, Prince George Cougars and the Victoria Royals aim to lock down the sixth, the seventh and that final eighth playoff spot in the 10-team loop ahead of the close of the regular season on Saturday night.

Vancouver (24-37-4-0) jumped from being in a tie for eighth to sixth place on Sunday thanks to a 3-2 win over the host Kelowna Rockets. The victory, propelled by a 27-save outing from 15-year-old netminder Matthew Hutchison, also ended an eight-game losing streak for the Giants.

The 10th-place Tri-City Americans (18-42-5-0) have already been eliminated from the playoffs.

According to the WHL head office, the Giants’ magic number to clinch a playoff spot is now three points, meaning that any combination of points gained by Vancouver and lost by Victoria totalling three assures Vancouver a post-season berth.

Vancouver hosts the fourth-place Seattle Thunderbirds (42-18-4-2) on Wednesday at the Langley Events Centre; hosts the fifth-place Rockets (40-20-1-5) on Friday at the LEC; and wraps-up league play by visiting the second-place Kamloops Blazers (47-16-3-0) on Saturday.

The Chiefs and the Royals meet Friday and Saturday in Victoria to close out the regular season, and the Cougars finish-up by visiting Kamloops on Friday and then Kelowna on Saturday.

The Giants can still miss the playoffs outright if they lose all three games in regulation, the Chiefs and the Royals split their two matchups and Spokane wins its game in overtime, and the Cougars take one of their final two games.

The WHL doesn’t allow a team to miss the playoffs based on mathematical tiebreakers, so if two teams wind up in eighth with the same number of points there will be a single-elimination game to decide the final post-season spot. The team with the most wins will host that contest.

Hutchison, a Nanaimo product who was Vancouver’s third-round pick in the 2021 WHL Draft in December, was making his second start of the season, following a 28-save outing in a 5-2 road loss to the Chiefs on March 9.

He’s the fourth underage call-up to see action in goal for Vancouver in franchise history, following Tyson Sexsmith (2004-05); Payton Lee (2011-12); and Ryan Kubic (2013-14). Hutchison played this season with the Under-18 North Island Silvertips. They were eliminated from their playoffs in early March.

Vancouver has been without starting goalie Jesper Vikman since he appeared to hurt his hamstring or groin in the first period of a March 4 game against Kamloops and left the contest. The Giants have listed it merely as a lower body injury.

Fellow 19-year-olds Will Gurski and Connor Martin have shared the brunt of the goaltending duties for Vancouver since then.

Vikman, a Swede who was a 2020 fifth-round pick of the Vegas Golden Knights, began skating again just recently. Coach Michael Dyck said he was slated to skate again Monday.

“He’s getting better, day-by-day,” Dyck said of Vikman, who turned 20 last month. “We won’t know more about if he’s ready to play until the end of the week.”

General manager Barclay Parneta has said all along that the Giants expect Vikman to play again this season. If they didn’t, they would have sent him home, according to Parneta.

As for Hutchison, Dyck said “mentally and emotionally he was very poised” facing the Rockets.

“He made some big saves early that made a big difference to our confidence as a team,” Dyck said.

He added that the win “was a step in the right direction for our team. It’s not a time to exhale, though. It’s a time to continue pushing forward.”