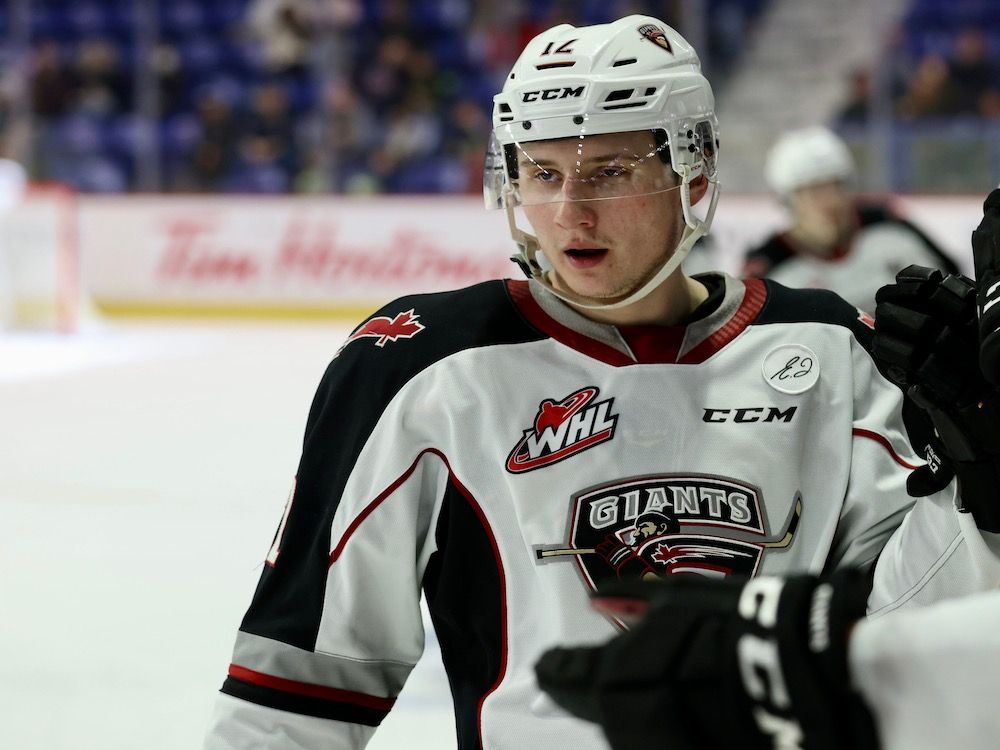 The Vancouver Giants will try to sweep a weekend series from the Everett Silvertips tonight without Adam Hall, who had two goals in the 5-3 win over Everett on Friday at the Langley Events Centre.

Hall received a three-game suspension from the WHL office on Saturday morning for his second period hit on Everett defenceman Ronan Seeley Friday that knocked the Carolina Hurricanes rearguard prospect from the game with an apparent shoulder injury. Hall received a boarding penalty from the referees.

Vancouver played one skater under the usual complement of 18 on Friday due to a suspension to forward Justin Lies and injuries to defenceman Tom Cadieux and forwards Cole Shepard, Julian Cull and Ty Halaburda.

Everett’s loss, coupled with the Kamloops Blazers’ 3-2 win over the Kelowna Rockets on Friday, vaulted Kamloops (42-14-2-0) past Everett and into first place in the WHL’s Western Conference.

Hall, who’s one of Vancouver’s three 20 year olds, bagged his 15th of the season later on in the second period Friday to make it 2-1 and then potted his 16th in the third to up the margin to 4-1.

Defenceman Evan Toth had a goal and an assist for Vancouver, while fellow rearguard Nicco Camazzola also scored on what was his 19th birthday Winger Payton Mount added an insurance marker into an empty net.

The Friday game had a spirited playoff feel to it and the LEC was as loud as its been in weeks.  The announced crowd was 2,475.

“The fans helped us out. They were loud,” said Toth afterwards. “We just battled. It was tough. There was a couple of times we gave up a goal, but we bounced back. We played a hard, defence-first game and we got rewarded big time.”

Vancouver was up 4-1 in the third, then gave up two goals three minutes apart midway through the period but were able to hold on. Giants coach Michael Dyck believes that his group learned lessons about closing out games in a 6-5 road win last Saturday over the Portland Winterhawks, a night when they had troubles after getting out to a 6-0 lead.

“They dug in and they worked together to find a way to win,” Dyck said of his charges. “We were starting to get frustrated but we got dialed back in. And that’s going to be so important moving forward.”

Connor Martin made 32 saves in the Vancouver net. He made a diving arm save on Michal Gut with the Giants’ two-men short and leading the scoreboard 1-0 in the second period that seemed to give the Giants a particular emotional boost.

It was his first appearance with Vancouver since Dec. 29. The Giants had added him in a trade with the Seattle Thunderbirds in December, looking for some cover when starter Jesper Vikman was away with Team Sweden at world juniors.

Martin went back to the AJHL’s Calgary Canucks upon Vikman’s return. That season is over, so he’s returned to Vancouver. Vikman is sidelined with a leg injury.