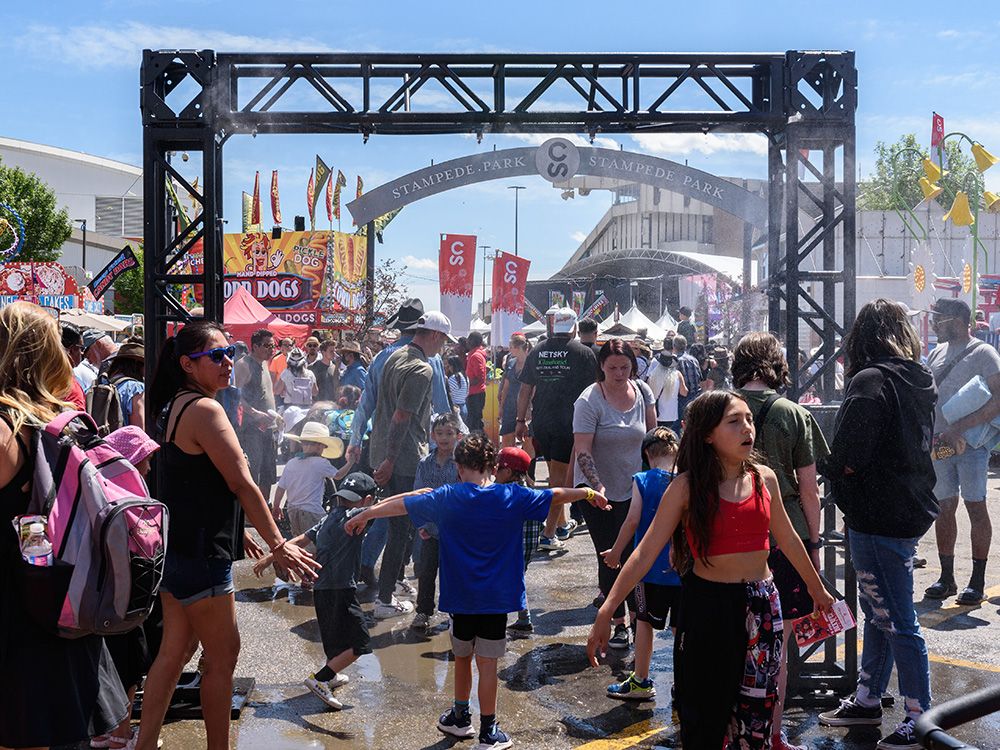 The sun continues to beam down across Calgary for the Stampede, and with high temperatures in the forecast, weather experts are urging residents to take some additional precautions before hitting the midway.

Environment Canada issued a heat warning early Tuesday morning, with temperatures expected to reach into the 30s through the rest of the week. Meteorologists anticipate Wednesday will feel a tad cooler, with potential thunderstorms forecasted, but temperatures should head back toward the 30s by the weekend. With overnight lows around a balmy 15 C, there’s little opportunity for things to cool down once the sun sets.

“If you’re on the Stampede fairgrounds … you’re probably finding yourself in direct sunlight in those hot temperatures. So in conditions like that, it’s going to be important for people to take extra good care of themselves,” said Environment Canada meteorologist Sara Hoffman.

At the Stampede, massive crowds — bigger than those seen in the last pre-pandemic Stampede in 2019 — are anticipated to make the sweltering heat feel even hotter and further increase the competition for reprieve in the shade.

Hoffman said residents should avoid being outdoors at the hottest hours of the day, take frequent breaks in cooled indoor areas, and drink lots of water or other non-alcoholic, non-caffeinated beverages to stay hydrated. She also said to keep a close eye on children, seniors and people with pre-existing conditions who may be at more significant risk for heat stroke or heat exhaustion.

A group of friends at the Stampede said finding shade was their best defence against the heat.

“We’ll stand in the shade as much as we can and I brought extra water and some spray bottles,” said Hayley Ngo. “We’re pretty excited to be here. It’s been a long time.”

She and her friends, Crystal Nguyen and Lydia Hansen, said they hadn’t been to the Stampede since before the pandemic.

“It’s really nice to be out and nice to see everyone, even if we’re here on the hottest day so far,” said Hansen.

Roland and Brenda Kalisch were enjoying ice cream on Tuesday afternoon in an effort to cool down and said they had just finished a cold lemonade.

“We’re being a little bit strategic to avoid the heat. We came early, of course, and at peak heat, we’ll go into the Round-Up Centre, we’ll take in some more sun to watch the Showband at 2 p.m. and then again, to beat the heat, we’re going to go to the Powwow in the Saddledome,” said Brenda. “And we’re staying hydrated and wearing our hats.”

With a cooler than usual summer to this point, Hoffman urged all residents to be mindful as the sudden warmer weather could feel like a “shock to the system” even for those in the best of health as most haven’t yet acclimatized to the heat.

“Check in with yourself,” she said. “Am I getting kind of dizzy? Am I starting to feel very tired? Am I feeling kind of nauseous? Have I been sick? Those are all signs of heat illness, and it’s important to take those seriously because they can exacerbate if they’re not addressed.”

Hoffman suggested that Stampede-goers get a weather application that will push alerts to their phones so they can keep informed and prepare themselves in advance of severe weather, be it thunderstorms or extreme heat.

The heat warning could remain in effect through to Saturday.

— With files from Stephanie Babych